NUI Galway 1-9 – UCC 0-7: Fourteen-man NUIG stunned UCC to advance to the semi-finals of the Sigerson Cup.

The visitors were the dominant side throughout this quarter-final but suffered a major blow when corner-back Aaron O’Connor was sent off on a straight red card seven minutes into the second-half. 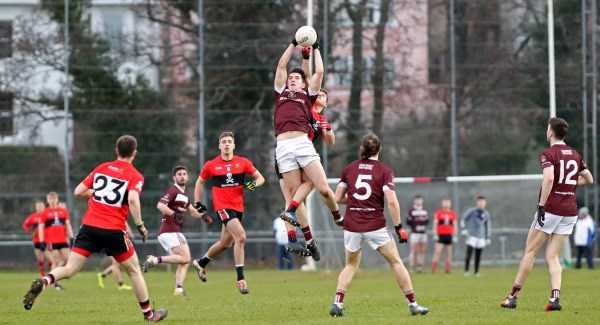 NUIG, at the time, led by 1-5 to 0-4, but UCC failed to press home their numerical advantage and were outscored by 0-4 to 0-3 from there to the finish.

The home side made a late burst when bringing the deficit back to four, 1-8 to 0-7, entering second-half stoppages and could have cut it back to the minimum when earning a penalty. Killian Spillane’s spot kick, however, was saved in injury-time.

NUIG bossed the opening half, leading 1-4 to 0-2 at the break. The visitors should have been further ahead at this juncture, kicking seven first-half wides. Brian Donovan supplied their goal, with Enda Tierney, Adam and Owen Gallagher among their scorers.

UCC didn’t get off the mark until the 25th minute, Stephen Sherlock opening their account with a free. They didn’t score from play in the first-half. They were without Kerry senior Sean O’Shea.