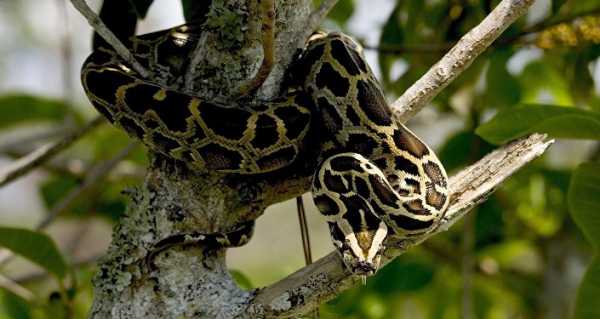 Pythons, nonvenomous snakes that in the US can primarily be observed in southern Florida, are not native to The Sunshine State. They began appearing in the 1980s and have posed a serious risk to local wildlife since that time, particularly in the protected Everglades wilderness region.

Florida’s chefs might have to come up with creative ideas on how to cook a python, as researchers come together to learn whether it is safe for humans to consume the creatures, CNN reported Sunday.

According to the report, the Florida Fish and Wildlife Conservation Commission is teaming up with the state’s Health Department to investigate mercury levels in pythons and conclude if it is safe for humans to eat them. If they decide it is safe, pythons may soon appear on restaurant menus across the state.

The new study is led and funded by the South Florida Water Management District, after previously launching its Python Elimination Program, through which over 6,000 pythons have been removed from Florida’s Everglades National Park.

According to the spokeswoman, the study is to develop and share “consumption advisories for Burmese pythons in South Florida to better inform the public” in hopes that Floridians may soon be able to aid the program while also enjoying what may become a new delicacy.

According to Donna Kalil, one of the program’s python bounty hunters, python is “really good when you cook it right”.

In her Instagram, she shares pictures of dishes she has made out of python meat – particularly, a so-called “python jerky”.

Nonvenomous snakes, pythons pose a serious risk to wildlife in Florida’s Everglades National Park as the species are invasive and their population can grow very fast and could potentially spread across the United States, especially if the country sees deep changes in climate due to global warming.

Residents of the state are asked by officials to remove and humanely kill pythons if they can, and report any sightings.