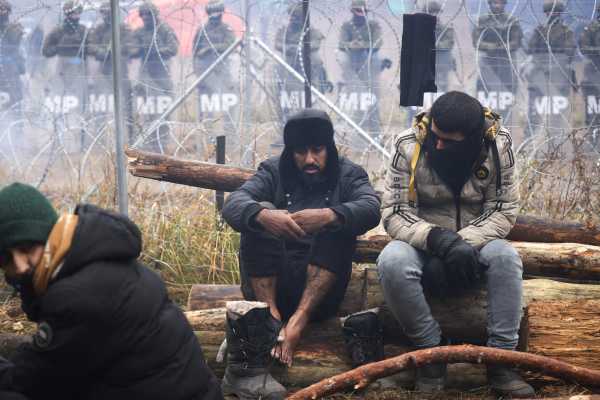 Belarus has sent thousands of desperate migrants to its border with Poland in a bid to antagonize the European Union over sanctions imposed last year, in the wake of Belarusian President Alexander Lukashenko’s brutal crackdown on political opponents and protesters.

The influx of migrants, which EU officials say Lukashenko has deliberately provoked as a “hybrid attack” on the EU, comes at a difficult moment for the EU as the bloc struggles with internal tensions of its own, but has so far resulted in an increasingly unified EU response.

New sanctions, which could target Belarusian airlines and officials responsible for encouraging the influx of people into the country, are set to be imposed on Monday, according to EU officials, and European Commission President Ursula von der Leyen said last week, “It is important that Lukashenko understands that [the regime’s] behavior comes with a price.”

However, it’s unclear whether they will deter Belarus, which is not an EU member and is sometimes referred to as “Europe’s last dictatorship,” from adding fuel to the existing crisis along the Belarus-Poland border.

The migrants — between 3,000 to 4,000 people according to Polish authorities, primarily from conflict-torn regions of the Middle East like Iraq, Syria, Yemen, and Afghanistan — have come to Belarus after the government relaxed visa rules in August, providing a safer, easier route to the EU border.

People trying to leave places like Sulaimaniya, in Iraqi Kurdistan, have received Belarusian visas, bought a ticket on one of the many flights run by the state-operated airline, and headed to Minsk, Belarus’s capital, where some have been housed in government-run hotels, according to the New York Times.

But far from providing humanitarian aid and a safe haven for migrants, the Lukashenko regime is pushing them toward the borders of Poland, Latvia, and Lithuania in an attempt to put pressure on the EU to lift sanctions on the nation.

Belarus has also taken direct action to make things harder for its EU neighbors: The New York Times reports that Belarusian security forces have provided migrants with instructions on crossing the borders and tools like wire cutters and axes to break down border fences.

On Saturday, Belarusian journalist Tadeusz Giczan tweeted that Belarusian forces were attempting to destroy fencing at the Polish border and using lasers and flashing lights to temporarily blind and confuse Polish soldiers stationed there in an attempt to help migrants get across the border.

Despite Belarusian efforts to force migrants into neighboring EU countries, however, the vast majority of those currently at the border are stuck there, with little protection from the elements. As winter sets in, migrants are sleeping in tents, often with inadequate clothing and supplies, and EU countries are thus far refusing them entry. Already, at least nine people have died; some estimates are even higher, and conditions could still worsen as winter sets in.

What does Lukashenko hope to accomplish?

Despite the severity of the humanitarian crisis unfolding at Belarus’s borders, Lukashenko’s aims appear to be primarily political. The strongman president desperately wants to bring the EU to the negotiating table over sanctions imposed after he was fraudulently reelected last year and force the bloc to again recognize him as the country’s legitimate leader.

Despite his more recent grievances, though, Lukashenko’s threats to open his country’s border go back even further, Artyom Shraibman, a political analyst based in Minsk and a nonresident scholar at the Carnegie Endowment for International Peace’s Moscow Center, told Vox this month.

“He actually threatened to do this for many years, long before the political crisis of 2020,” Shraibman said via WhatsApp. “Every time the EU criticized him, every time the West criticized him, he reiterated the same chain of argument — ‘You don’t appreciate me, that I am defending you from the illegal migrants, I am defending you from the drug trafficking, I’m guarding your eastern border, and you’re not grateful.’”

But Lukashenko didn’t make good on his threats until 2021, after the EU sanctioned Lukashenko, his son and national security adviser Viktor, and 179 other individuals and entities, due to Belarus’s fraudulent presidential election and subsequent crackdown on pro-democracy protesters last year.

Though he remains in office, last year’s election saw Lukashenko’s 25-year grip on power begin to erode, when Svetlana Tikhanovskaya, the current Belarusian opposition leader who was a political newcomer at the time, mounted a serious — and probably successful — campaign to oust him. Tikhanovskaya, who only entered the race after her husband, Sergei, was arrested by the regime, managed to unite the Belarusian opposition behind a platform of democratic change and routing corruption and wealth inequality.

Evidence suggests Tikhanovskaya’s strategy may have worked; some exit polls from the August 2020 election suggest she won as much as 80 percent of the vote. Lukashenko, however, declared victory, cracked down on protests erupting throughout the country, and forced Tikhanovskaya into exile in Lithuania while jailing other opposition leaders.

The brutality of Lukashenko’s reaction, plus the glaring falsehood of his latest “victory,” prompted the EU to take coercive action against his regime, applying increasingly restrictive measures starting in October of last year.

Belarus’s pariah status escalated even further this spring, after a Ryanair flight was forced down by a Belarusian fighter jet so that the regime could arrest two passengers: dissident journalist Roman Protasevich and his girlfriend, Sofia Sapega, who were detained by the regime. In response, the EU banned Belarusian air carriers from EU airports and airspace.

With few tools at his disposal, and few friends except for a reluctant Russia, Lukashenko finally made good on his threat to open Belarus to the flow of migrants hoping to make a new life in the EU.

The New York Times’s Max Fisher points out that the flow of refugees from border countries isn’t exactly a novel problem for the bloc, and it is one that the EU has created by incentivizing places like Libya, Turkey, and Sudan to keep migrants from its borders, despite the financial and human rights costs.

As Fisher puts it, “Belarus, in other words, is joining a practice that the European Union has long institutionalized: cutting deals with border countries to keep refugees and migrants away from the EU border.”

Still, Shraibman says, Belarus’s latest pressure tactics likely won’t get Lukashenko what he wants: Belarus, having forced the issue by essentially inviting migrants into the country, leading them to the EU border, and then refusing them asylum when they can’t gain entry, is now facing even more sanctions.

“The EU will probably not cave, because the pressure, it’s not that significant,” Shraibman said. ‘It’s not like the million refugees that came to the EU in 2015, it’s just thousands of people. It’s digestible for the EU; it’s not something that will make them change their position.”

Shraibman told Vox it’s unlikely that Belarus’s provocation will result in concessions from the EU. Lukashenko, however, couldn’t have picked a better issue to put pressure on the bloc. Poland, where the border crisis has been most acute, is already on the outs with EU leadership over democracy issues, and immigration has long proved a particularly thorny issue for the bloc.

During the 2015 refugee crisis, Poland was one of the most strident critics of the EU’s migration policy; Jarosław Kaczyński, leader of the ruling Law and Justice Party, falsely claimed in 2015 that Syrian refugees were diseased and they would use Polish churches as “toilets,” as Anne Applebaum writes for the Atlantic.

Since then, the nation has drifted further from common EU policies and more toward the kind of right-wing, nationalist policies that have been creeping into the forefront of European politics over the past decade.

The rift between Poland and the EU has lately intensified over a disciplinary process in the former’s court system, which the EU charged had been used by the Polish government to pressure judges and bring them under political control. In October, the EU levied a 1 million euro per day fine against Poland for violating EU rules, and Poland has also enacted increasingly harsh restrictions against LGBTQ citizens and the media, distancing itself from the more progressive values the EU embraces.

But if one of Lukashenko’s goals in addition to obtaining sanctions relief was to further fracture the EU, as European Commissioner for Home Affairs Ylva Johansson claimed this past summer when the crisis started, it hasn’t worked.

“Poland, which is facing a serious crisis, should enjoy solidarity and unity of the whole European Union,” Charles Michel, president of the European Council, said on Wednesday during a visit to the Polish capital of Warsaw, emphasizing that the EU intends to deal with Lukashenko’s aggression and the problems it poses for the EU separately from the EU’s internal struggles with member countries.

As Applebaum points out, however, Poland has been somewhat less quick to align itself with the EU. While the country is now relying on EU sanctions and calling upon NATO to deal with the issue of migrants on its border, Poland previously rebuffed assistance from Frontex, the EU border police, and declined to address the flow of migrants over the summer by accepting help from the European Asylum Support Office.

Now, Poland and the EU both are facing a genuine humanitarian disaster at the Belarus-Poland border, where thousands of people are stuck in limbo between two nations that won’t accept them, ill-equipped to survive a harsh winter, and unable to return to their own countries. Thousands more, who have been exploited by Lukashenko’s government into buying travel packages to Minsk so he can use them as leverage against the EU, wait in the capital or near the border with Poland, according to the Moscow Times.

Several nations, including Iraq and Turkey, have limited or canceled their flights to Belarus in order to stem the flow of people into the country, as has Dubai; however, there are still thousands of people who desperately need aid waiting at the border or stuck in Minsk.

On Monday, the EU — with the support of the US, which has also sanctioned the Lukashenko regime — is set to impose further sanctions against Belarus, the opposite of Lukashenko’s goal. However, if Lukashenko continues or escalates his tactics, Michel has floated the possibility of “physical infrastructure” like barriers, to keep migrants out.

Whatever happens, Shraibman says the current crisis has put paid to the possibility of direct talks between Belarus and the EU.

“I can … imagine a situation where Lukashenko backs down, if he’s given some option to save face,” Shraibman told Vox, suggesting that could happen by sending migrants back to their home countries with the help of the UN. “But to imagine direct diplomatic negotiations between him and the EU, that is something that is not possible at the moment.”