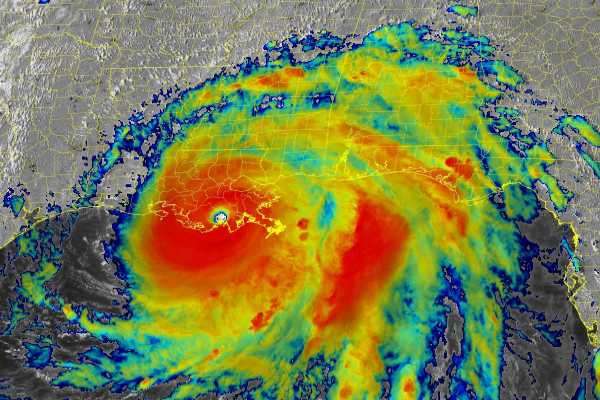 Hurricane Ida has begun pummeling the Gulf Coast, making landfall as a Category 4 storm on Sunday near Port Fourchon, Louisiana. The storm has already tied for the strongest recorded landfall in Louisiana, with winds at 150 miles per hour. Hurricane Laura in 2020 also had 150-mile-per-hour winds, as did an 1856 hurricane, according to the Weather Channel.

Hurricane Ida’s rapid development made preparation more challenging, as the Gulf Coast already grapples with Covid-19 hospitalizations. New Orleans Mayor LaToya Cantrell issued an evacuation order for only part of the city because there simply wasn’t enough time to evacuate all of New Orleans.

“Time is not on our side,” Cantrell said in a press conference Saturday, noting that the hurricane was “rapidly growing” and “intensifying.”

How hurricanes change so fast

Most hurricanes that impact the US start out as thunderstorms off the coast of Africa, according to the University Corporation for Atmospheric Research (UCAR) Center for Science Education. Occasionally, several thunderstorms form at once and encounter a point of low atmospheric pressure called a tropical depression. The clouds rotate around the tropical depression — creating the beginnings of a hurricane’s characteristic swirl of clouds — and pick up speed as they draw energy from the warm water below.

If this mass of swirling clouds reaches a windspeed of 39 miles per hour or above, it’s classified as a tropical storm, the precursor to a hurricane. If the storm keeps picking up speed and reaches wind speeds of at least 75 miles per hour, then it’s officially a hurricane.

The formation of these storms depends on humid air, warm waters, and a tropical depression. These enable the air and water, as they interact, to release more moisture, creating more clouds. Air rotates the mass of clouds as it rises; in the Northern Hemisphere, air pulled into the center, or eye of a hurricane, bends to the right due to the earth’s rotation. In the Southern Hemisphere, that air bends to the left in the same weather phenomenon, called the Coriolis effect. The Coriolis effect doesn’t exist within 300 miles of the equator, so hurricanes (or tropical cyclones or typhoons, depending on the part of the world they hit) can’t form in that region.

Thunderstorms intensify into tropical storms and hurricanes when the atmosphere and water are warm enough to generate increased energy to keep the storms moving. Cooler water weakens a hurricane; they also weaken when they hit land, but by that point, the damage has already started.

What is happening with Ida

Hurricane Irma, a Category 3 storm that hit Florida in 2017, caused “widespread devastation,” even though it had weakened from a Category 4 when it hit land over the Florida Keys.

According to a report from the National Hurricane Center, Irma “was one of the strongest and costliest hurricanes on record in the Atlantic basin,” directly killing 47 people in Florida and the Caribbean, and causing a further 82 indirect deaths due to “a combination of falls during preparations for Irma’s approach, vehicle accidents, carbon monoxide poisoning from generators, chainsaw accidents, and electrocutions,” as well 14 deaths due to overheating from lack of air conditioning at a nursing home. Irma caused hundreds of millions of dollars in damage, as well as a record 5 feet of flooding in Jacksonville.

The National Hurricane Service upgraded Hurricane Ida to Category 4 Sunday, just an hour after it was designated a Category 3 hurricane.

How Ida compares to Katrina and other major hurricanes

Katrina’s effects were widespread and long-term; the storm and its aftermath killed 1,833 people and caused $108 billion in damage.

Hurricane Katrina was also notable for the ways in which it exposed stark racial divides, both while it was active and in the US government’s response to the storm.

“Images of poor, mostly Black New Orleans residents stranded on rooftops and crowded amid fetid conditions in what was then the Louisiana Superdome” accompanied news stories, the Pew Research Center wrote in a 10-year retrospective.

In a national poll conducted a week after the hurricane, 66 percent of Black respondents said they believed “the government’s response to the situation would have been faster if most of the victims had been white,” according to Pew.

And while New Orleans is still predominantly a Black city, there are 100,000 fewer Black citizens than there were before Katrina, the AP reported in 2020.

Hurricane Harvey, another Category 4 storm, hit Texas and Louisiana in August 2017; in two days, it was upgraded from a tropical storm to a Category 4 hurricane. Hurricane Harvey slowed after it made landfall, causing torrents of rain to flood southeast Texas.

The rapidly intensifying nature of these storms is concerning, but scientists aren’t yet clear on whether it’s actually happening more often. In a piece in the Conversation about Hurricane Laura — another storm that rapidly progressed from a tropical storm to a Category 4 hurricane — Chris Slocum, a physical scientist at the NOAA and Cooperative Institute for Research in the Atmosphere at Colorado State University, wrote, “The Atlantic has seen several hurricanes rapidly intensify like this in recent years.” However, storms that behave this way “are fairly rare,” so, he writes, “there isn’t enough information yet to say if rapid intensification is happening more often.”

Still rarer are Category 5 hurricanes, but they do happen, and they render affected areas “uninhabitable for weeks or months,” according to the National Hurricane Center.

Hurricane Maria, the 2017 storm that demolished Caribbean islands including Puerto Rico, hit the island of Dominica as a Category 5 storm.

“Maria knocked down 80 percent of Puerto Rico’s utility poles and all transmission lines, resulting in the loss of power to essentially all of the island’s 3.4 million residents. Practically all cell phone service was lost and municipal water supplies were knocked out. At … the end of 2017, nearly half of Puerto Rico’s residents were still without power, and by the end of January 2018, electricity had been restored to about 65 percent of the island.”

A study from Harvard University’s T.H. Chan School of Public Health estimated the death toll from Maria at 4,645, although the numbers could be higher.

Hurricane Ida will test the readiness of New Orleans’s infrastructure to handle storms of this magnitude after Hurricane Katrina. Those who have fled the area now don’t know when they’ll be able to go back home, or if home will even exist once the storm subsides. People who must remain — for one reason or another — will be dealing with power outages, water and supply shortages, flooding, and devastation yet to be seen.