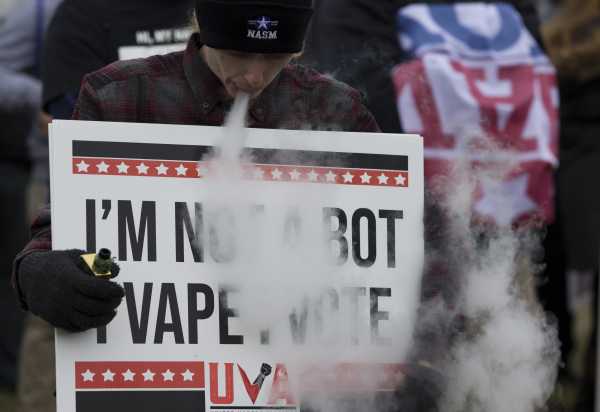 Back in September, the White House organized a press conference in which President Donald Trump announced he was planning to swiftly pull flavored e-cigarettes from the market — a reaction to both a youth vaping epidemic that had escalated, and an ongoing outbreak of severe vaping-related lung disease.

Now it appears the ban — which was was supposed to prohibit sales of flavored e-cigarettes, including products featuring bubble gum, creme brûlée, fruit, menthol, and mint — is dead.

On November 4, the night before a planned news conference, Trump refused to sign off on the ban — reportedly over fears that it could cause people to lose their jobs, and cost him votes among supporters who use e-cigarettes, according to the Washington Post, which broke the story.

Trump was also swayed by protests against the ban and a social media movement — #IVapeIVote — in which e-cigarette advocates argued the ban could boost smoking rates and harm businesses. Meanwhile, pressure from tobacco and vaping industry lobbyists didn’t help, including a poll commissioned by none other than the vaping industry showing repercussions at the polls for Trump in battleground states, the New York Times reported.

It’s possible the president could change his mind again, and proceed with the ban, or come back with a carve out that protects vape shops, excluding them from the flavor ban. He might even attempt other avenues of legislation to make it harder for young people to access e-cigarettes, like raising the minimum age for buying from from 18 to 21, the Post said.

Or the ban may be another instance of a Trumpian promise unkept, one where politics got in the way of an important policy debate, as the Times’ Maggie Haberman pointed out on Twitter:

And some public health advocates expressed dismay over Trump’s reversal:

“Public health decisions should be made based on science and not polling data,” Michael Eriksen, a former director of the Centers for Disease Control and Prevention’s Office on Smoking and Health, told Vox.

But it’s important to remember that the ban was always controversial — and not everyone in the public health community was convinced that it’d fix America’s tobacco problem.

Why the flavor ban was controversial

Smoking remains the leading cause of preventable death, killing nearly half a million people in the US every year, and vaping is the most common method of smoking cessation. Though the best evidence suggests vaping’s no panacea, it is helpful for some — though the role flavors play in helping people quit smoking that isn’t clear.

“When I talk to the smokers we treat here, I hear compelling testimonials from people who tried to quit smoking many times and nothing worked until they tried vaping,” Andrew Hyland, chair of the department of health behavior at Roswell Park Comprehensive Cancer Center, told Vox in September. “Flavored e-cigarettes may help some cigarette smokers quit.”

An op-ed in the Atlantic cited the record low in smoking prevalence among adults, and survey evidence (albeit from a study funded by the vaping industry) showing adult vapers enjoy fruit and dessert flavors. “It is virtually inevitable that banning flavors to make e-cigarettes less appealing to teenagers will simultaneously jeopardize adults who vape in place of smoking,” the article’s author, Sally Satel, wrote.

“[It] may reduce rates of vaping among kids, and it may also have negative impact on those ex-smokers who quit smoking as they may relapse to smoking,” Maciej Goniewicz, a leading e-cigarette researcher, also based at Roswell Park Comprehensive Cancer Center, summed up when news of the ban broke. “[The ban] looks like double-edge sword.”

As the White House figures out what to do with vaping flavors, public health experts have told Vox that it might also consider looking at flavored cigarettes and cigars.

Researchers have long known menthol cigarettes are more attractive to youth and harder to quit than regular cigarettes. They’ve also been heavily marketed at — and are especially popular among — black smokers.

As combustible products, they’re more dangerous than e-cigarettes. Yet menthol cigarettes, along with flavored cigars, have been allowed to remain on the market.

So instead of just banning flavors in e-cigarettes, the FDA could also prohibit menthol in regular cigarettes, or limit the amount of nicotine in cigarettes to non-addictive levels, said Michael Eriksen, who is also the founding dean of the Georgia State University School of Public Health. “We need to move forward with a focus on smokers,” he added, “make combustible cigarettes less appealing and addictive, and properly regulate innovation and possibly less harmful technologies. This plan has been complicated by the teen vaping problem and the lung disease outbreak, but neither should distract from the original goal of helping smokers quit using combustible products.”