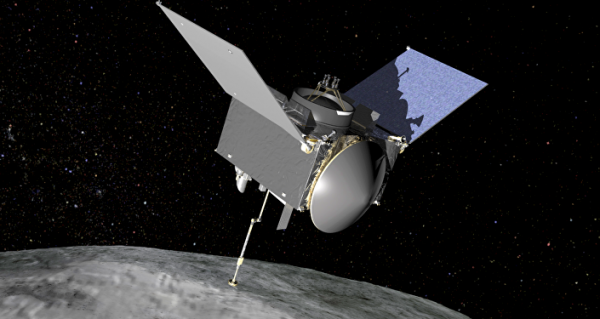 The sample collection procedure itself is expected to take no longer than 10 seconds, but the procured material isn’t expected to arrive on Earth until 2023.

NASA’s OSIRIS-REx spacecraft, which has been studying asteroid Bennu from a distance for nearly two years, is about to commence its primary mission – getting really close to the space rock and snatching a sample from it.

During this undertaking, set to commence on 20 October, the spacecraft is going to drop out of its orbit around Bennu and spend some four hours carefully getting into position just above the asteroid’s surface.

The spot OSIRIS-REx is aiming for is the relatively flat middle of a crater called Nightingale, which is about the size of a tennis court, with AP saying that the target spot is “comparable to a few parking places here on Earth”, with boulders “as big as buildings” looming over it.

Once in position, the spacecraft is going to use its 3.4-meter “arm” to commence a brief contact with the space rock, which is expected to last between 5 and 10 seconds, and which involves shooting out pressurised nitrogen gas and sucking up the “churned dirt and gravel”; the spacecraft will be operating autonomously while performing this manoeuvre.

If unsuccessful, the OSIRIS-REx could perform another attempt. The samples set to be retrieved by the spacecraft won’t reach our planet until 2023.

Bennu became the target of this endeavour due to the fact that this ancient space rock was around when our Solar system was forming some 4.5 billion years ago.