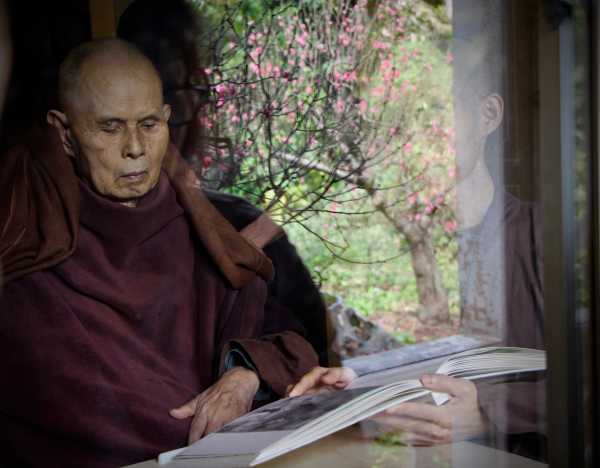 Editor’s note: The International Plum Village Community of Engaged Buddhism has announced that Thich Nhat Hanh died on January 22, 2022, in Huế, Vietnam. The interview below with one of his senior disciples was first published in March 2019.

Thich Nhat Hanh has done more than perhaps any Buddhist alive today to articulate and disseminate the core Buddhist teachings of mindfulness, kindness, and compassion to a broad global audience. The Vietnamese monk, who has written more than 100 books, is second only to the Dalai Lama in fame and influence.

Nhat Hanh made his name doing human rights and reconciliation work during the Vietnam War, which led Martin Luther King Jr. to nominate him for a Nobel Prize.

He’s considered the father of “engaged Buddhism,” a movement linking mindfulness practice with social action. He’s also built a network of monasteries and retreat centers in six countries around the world, including the United States.

In 2014, Nhat Hanh, who is now 93 years old, had a stroke at Plum Village, the monastery and retreat center in southwest France he founded in 1982 that was also his home base. Though he was unable to speak after the stroke, he continued to lead the community, using his left arm and facial expressions to communicate.

In October 2018, Nhat Hanh stunned his disciples by informing them that he would like to return home to Vietnam to pass his final days at the Tu Hieu root temple in Hue, where he became a monk in 1942 at age 16. (The New York Times reports that nine US senators visited him there in April.)

As Time’s Liam Fitzpatrick wrote, Nhat Hanh was exiled from Vietnam for his antiwar activism from 1966 until he was finally invited back in 2005. But his return to his homeland is less about political reconciliation than something much deeper. And it contains lessons for all of us about how to die peacefully and how to let go of the people we love.

When I heard that Nhat Hanh had returned to Vietnam, I wanted to learn more about the decision. So in February I called up Brother Phap Dung, a senior disciple and monk who is helping to run Plum Village in Nhat Hanh’s absence. (I spoke to Phap Dung in 2016 right after Donald Trump won the presidential election, about how we can use mindfulness in times of conflict.)

Our conversation has been edited for length and clarity. 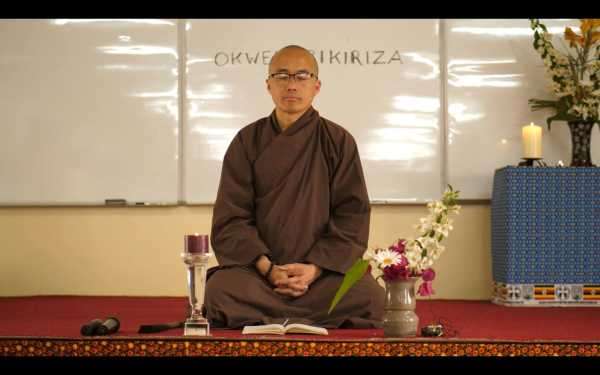 Tell me about your teacher’s decision to go to Vietnam and how you interpret the meaning of it.

He’s definitely coming back to his roots.

He has come back to the place where he grew up as a monk. The message is to remember we don’t come from nowhere. We have roots. We have ancestors. We are part of a lineage or stream.

It’s a beautiful message, to see ourselves as a stream, as a lineage, and it is the deepest teaching in Buddhism: non-self. We are empty of a separate self, and yet at the same time, we are full of our ancestors.

He has emphasized this Vietnamese tradition of ancestral worship as a practice in our community. Worship here means to remember. For him to return to Vietnam is to point out that we are a stream that runs way back to the time of the Buddha in India, beyond even Vietnam and China.

So he is reconnecting to the stream that came before him. And that suggests the larger community he has built is connected to that stream too. The stream will continue flowing after him.

It’s like the circle that he often draws with the calligraphy brush. He’s returned to Vietnam after 50 years of being in the West. When he first left to call for peace during the Vietnam War was the start of the circle; slowly, he traveled to other countries to do the teaching, making the rounds. And then slowly he returned to Asia, to Indonesia, Hong Kong, China. Eventually, Vietnam opened up to allow him to return three other times. This return now is kind of like a closing of the circle.

It’s also like the light of the candle being transferred, to the next candle, to many other candles, for us to continue to live and practice and to continue his work. For me, it feels like that, like the light is lit in each one of us.

And as one of his senior monks, do you feel like you are passing the candle too?

Before I met Thay in 1992, I was not aware, I was running busy and doing my architectural, ambitious things in the US. But he taught me to really enjoy living in the present moment, that it is something that we can train in.

Now as I practice, I am keeping the candlelight illuminated, and I can also share the practice with others. Now I’m teaching and caring for the monks, nuns, and lay friends who come to our community just as our teacher did.

So he is 92 and his health is fragile, but he is not bedridden. What is he up to in Vietnam?

The first thing he did when he got there was to go to the stupa [shrine], light a candle, and touch the earth. Paying respect like that — it’s like plugging in. You can get so much energy when you can remember your teacher.

He’s not sitting around waiting. He is doing his best to enjoy the rest of his life. He is eating regularly. He even can now drink tea and invite his students to enjoy a cup with him. And his actions are very deliberate.

Once, the attendants took him out to visit before the lunar new year to enjoy the flower market. On their way back, he directed the entourage to change course and to go to a few particular temples. At first, everyone was confused, until they found out that these temples had an affiliation to our community. He remembered the exact location of these temples and the direction to get there. The attendants realized that he wanted to visit the temple of a monk who had lived a long time in Plum Village, France; and another one where he studied as a young monk. It’s very clear that although he’s physically limited, and in a wheelchair, he is still living his life, doing what his body and health allows.

Anytime he’s healthy enough, he shows up for sangha gatherings and community gatherings. Even though he doesn’t have to do anything. For him, there is no such thing as retirement.

But you are also in this process of letting him go, right?

Of course, letting go is one of our main practices. It goes along with recognizing the impermanent nature of things, of the world, and of our loved ones.

This transition period is his last and deepest teaching to our community. He is showing us how to make the transition gracefully, even after the stroke and being limited physically. He still enjoys his day every chance he gets.

My practice is not to wait for the moment when he takes his last breath. Each day I practice to let him go, by letting him be with me, within me, and with each of my conscious breaths. He is alive in my breath, in my awareness.

Breathing in, I breathe with my teacher within me; breathing out, I see him smiling with me. When we make a step with gentleness, we let him walk with us, and we allow him to continue within our steps. Letting go is also the practice of letting in, letting your teacher be alive in you, and to see that he is more than just a physical body now in Vietnam.

What have you learned about dying from your teacher?

There is dying in the sense of letting this body go, letting go of feelings, emotions, these things we call our identity, and practicing to let those go.

Letting go is a practice not only when you reach 90. It’s one of the highest practices. This can move you toward equanimity, a state of freedom, a form of peace. Waking up each day as a rebirth, now that is a practice.

In the historical dimension, we practice to accept that we will get to a point where the body will be limited and we will be sick. There is birth, old age, sickness, and death. How will we deal with it? 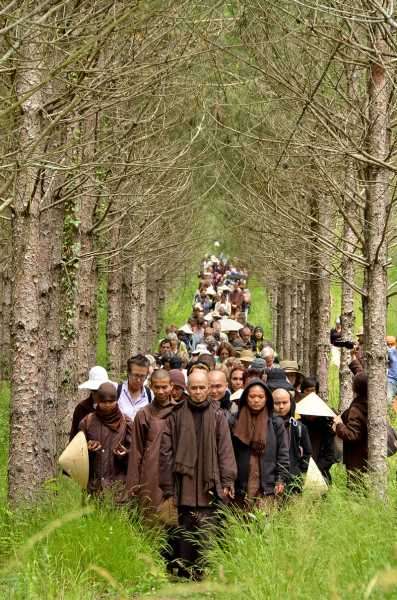 What are some of the most important teachings from Buddhism about dying?

We are aware that one day we are all going to deteriorate and die — our neurons, our arms, our flesh and bones. But if our practice and our awareness is strong enough, we can see beyond the dying body and pay attention also to the spiritual body. We continue through the spirit of our speech, our thinking, and our actions. These three aspects of body, speech, and mind continues.

In Buddhism, we call this the nature of no birth and no death. It is the other dimension of the ultimate. It’s not something idealized, or clean. The body has to do what it does, and the mind as well.

This awareness also helps us be more mindful in our daily life, to cherish every moment and everyone in our life.

One of the most powerful teachings that he shared with us before he got sick was about not building a stupa [shrine for his remains] for him and putting his ashes in an urn for us to pray to. He strongly commanded us not to do this. I will paraphrase his message: