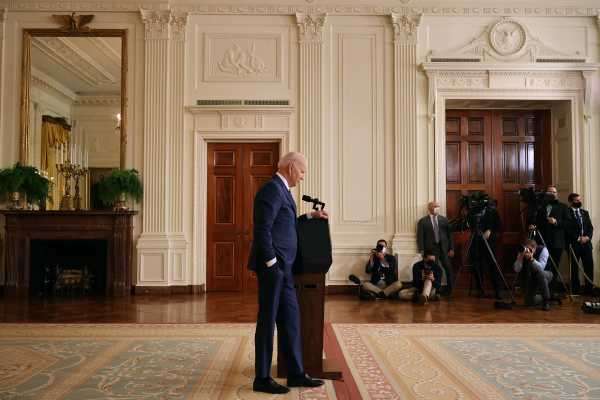 Historic climate legislation may still have a chance. Success now hinges on Democrats, once and for all, figuring out exactly what it is Sen. Joe Manchin (D-WV) wants to bring him back to the negotiating table to pass a version of the Build Back Better Act. The party is running out of time to deliver on climate change, but first they need to find a break in the frozen talks.

When Democrats took control of the Senate a year ago, they had a mandate to ensure the United States would accelerate a transition away from fossil fuels and to avoid the worst effects of climate change. Without legislation, they underdeliver to a political base worried about the climate, a constituency they are counting on turning out in the midterms.

Though the original Build Back Better Act is now dead, Congress still may have a shot at passing a bill to fund $550 billion for implementing clean energy incentives, funding electric vehicles and charging stations, instituting a fee on methane pollution, and helping the most vulnerable communities facing climate disasters.

On the eve of his one-year anniversary as president, Biden laid out one last path forward to breaking the Senate stalemate on the original bill. “It’s clear to me … that we’re going to have to probably break it up,” Biden told reporters at a press conference Wednesday. “I’ve been talking to a number of my colleagues on the Hill — I think it’s clear that we would be able to get support for the $500-plus billion for energy and the environmental issues that are there.”

There’s still more wrangling ahead to get Manchin’s support, but the Senate is up against a clock that’s ticking down until the midterms. The Senate doesn’t have forever to figure this out or start from scratch, because it also has to confirm nominees to the administration and avert a government shutdown in February.

His vote, along with that of every other Democratic senator, is required to pass it using the reconciliation process, which lets Democrats bypass the Republican filibuster.

Manchin has said much work still lies ahead. On Thursday, he told CNN congressional correspondent Manu Raju, “We will just be starting from scratch. The main thing we need to do is take care of the inflation. Get your financial house in order. Get a tax code that works and take care of the pharmaceuticals that are [gouging] the people with high prices. We can fix that. We can do a lot of good things.”

Biden suggested Democrats could reach a deal with Manchin and the other holdout, Sen. Kyrsten Sinema (D-AZ), with a slimmed-down version of Build Back Better, possibly by cutting back on the child tax credit and free community college. Importantly, Biden said that even with concessions to Manchin, they could preserve the climate provisions. Then Democrats might take another shot at passing these other priorities later this year.

For once, there’s surprising agreement from Democratic leaders that the climate priorities won’t be what are sacrificed in any dealmaking ahead. Biden has been firm on that, and Manchin himself said a few weeks ago, “The climate thing is one that we probably can come to an agreement much easier than anything else. There’s a lot of good things in there.”

Other senators have rallied around the imperative that the US not spend another decade delaying billions in clean energy funds and climate adaptation. “I just came off the worst year ever on my farm,” Sen. Jon Tester (D-MT) said. “We need to do something on climate change. I think we spent $144 billion this year on disasters, and I don’t think that included crop insurance. So we need to do something on climate, too.”

There is no deal yet on what this slimmed-down BBB would look like, nor has Manchin suggested what he could agree to. And some pieces on climate change could still be cut: Manchin has criticized some provisions of the House bill, like a methane fee on gas producers responsible for excess pollution and tax credits that favor union-made electric vehicles.

But much of the work of negotiating a climate agreement has already been done. “There’s already been tough choices and compromise to get to to a place where 50 US senators and the president support the climate provisions,” said Jamal Raad, executive director of Evergreen, a climate group that has been advising Democrats on the legislation.

The biggest compromise was cutting out the single most impactful climate policy in the House bill, a clean electricity standard that required utilities to meet benchmarks for wind and solar adoption. The remaining climate policies include $320 billion to finance clean energy adoption nationwide. These tax credits are already priced out for the decade, meeting one of Manchin’s demands to account for the 10-year cost of proposals in the package.

Biden and congressional Democrats have hard decisions ahead. If Manchin is still negotiating in good faith, proposals will be on the chopping block. The tall order is getting every Democratic senator to come around to the idea that something will have to give to break through this logjam.

“We’re just too close to striking a deal on this transformative climate investment,” Raad said. “We need to find the biggest, most aggressive Build Back Better bill that we can pass, taking the climate provisions with whatever we can agree to on the health care side, and we need to get this done.”

More Senate Democrats have said this week they are open to giving Manchin what he wants to see this done. “We need to move to pass a package now that has 50 votes,” Sen. Edward Markey (D-MA) told Axios. “The climate, justice and clean-energy provisions in Build Back Better have been largely worked through and financed, so let’s start there and add any of the other important provisions to support working families that can meet the 50-vote threshold.”

For progressive Democrats, following Biden’s suggestion to break down the bill is a hard pill to swallow. That requires choosing among proposals that would all help different American communities. As the Atlantic’s Rob Meyer explained last week: “The greatest risk of all is that Democrats continue to procrastinate. It’s easier, after all, to wheedle Manchin than it is to pick a favorite among favorite proposals.”

There’s also the chance that Manchin is not negotiating in good faith, and really does want to poison the bill by starting from scratch and tackling the national debt first. In that scenario, the decisions would be even harder. With the legislative path closed for climate action, activists would want to see Biden gamble on aggressive executive actions to address rising oil production and push clean energy, risking court interference. Democrats can’t count on Republican votes for climate action, but the agency budgetmaking process can still be an opportunity to advance climate policies (this still requires bipartisan support).

So it isn’t just Biden and Democratic lawmakers who have hard choices ahead. Climate activists have also grown tired of seeing their demands shrink to a place where Manchin could support them. “We should pass climate legislation immediately, but we need to do so much more than that if we want young people across our country to have any faith in Democrats or our government going forward,” said Varshini Prakash, Sunrise Movement’s executive director.