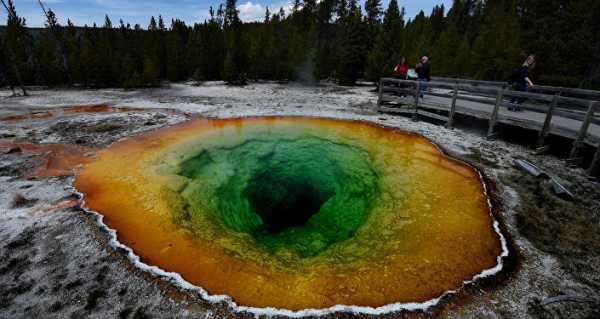 The 3,472-square-mile park known for its wildlife and geothermal features is located in the western United States. The park sits on a supervolcano – Yellowstone Caldera – which if it were to erupt, experts say, could kill up to 100,000 people and change the planet’s climate.

A “super eruption” at Yellowstone Park is not the biggest concern for humanity, said volcano expert Clive Oppenheimer. According to the scientist, people should not be worried about the Yellowstone Caldera as it is unlikely it will erupt in the near future. “The one [eruption] that people get excited about and keen on is the chance of a colossal eruption – what we might call a super eruption – but that is a very rare event. The probability of that is exceedingly low, probably less than one in a million per year,” he told the Daily Express.

Oppenheimer noted that people should worry more about other things, which volcanoes may cause. Magma under the Earth’s surface produces heat and volcanic gases that power the park’s famous hot springs and geysers The expert believes that steam explosions are more likely to occur.

Yellowstone National Park sits on one of the most seismically active areas in the United States, with approximately 700 to 3,000 earthquakes occurring there each year. However, most of them are not felt. The US Geological Survey has been monitoring the park’s supervolcano since 2001. Experts say that a “super eruption” will be preceded by earthquakes, ground uplift and unusual volcanic activity. However, Oppenheimer says that there is not enough data to predict when exactly it will occur.

How Dangerous is Yellowstone Caldera?

Over its history it had three major eruptions – the last being about 640,000 years ago. Each time the the volcano transformed the landscape around it.

Dr Jerzy Zaba, a geologist from the University of Silesia in Katowice, Poland, said should a “super eruption” occur it it will destroy most of the United States. There is no way to prevent it, the expert said noting that the only way to save animals and people would be to evacuate them. Despite frequent seismic activity, scientists say chances are slim that the supervolcano will “speak” again in the near future.