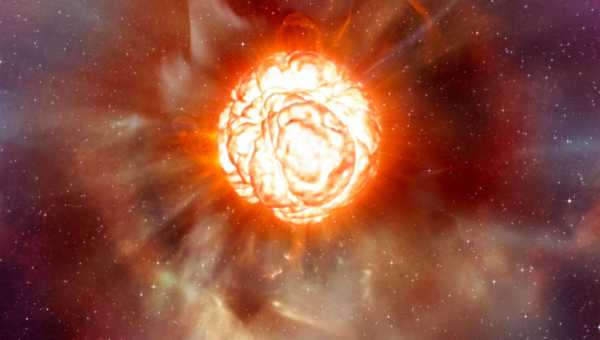 The giant known as Betelgeuse, located 520 light-years away from Earth, which is relatively close by space standards, has long puzzled astronomers with some peculiarities. A new model suggests that an explanation can be found in a dark secret from its past.

The red giant whopper of a star Betelgeuse, which is bigger than the orbit of Mars and located so close that astronomers can resolve its surface features with telescopes, might have engulfed its smaller star companion, Live Science reports. Astronomer Manos Chatzopoulos from Louisiana State University in Baton Rouge and his companions came to this conclusion after running stellar-evolution computer models, incorporating ideas that could explain its peculiarities.

As the researcher explained at the 235th meeting of the American Astronomical Society, although Betelgeuse has entered a red giant phase and its rotational rate was supposed to slow down due to the star’s expansion, it is actually between 17,700 and 53,000 km/h. Moreover, the giant is even said to be a runaway star, zipping at a mind-boggling speed of 108,000 km/h.

However, as Chatzopoulos put it, “for such a famous star that everyone knows and loves, nobody has tried to explain the combination of these two things.”

The idea that it might have devoured a smaller companion, which Betelgeuse had after it allegedly originated from a star-dense region of the Orion OB1a association, as the giant aged and expanded could explain this combination. At least, the model based on the notion that it was once two separate stars, with 16 times and four times the sun’s mass respectively, fits Betelgeuse most, according to their study.

Their theory could put concerns that Betelgeuse might imminently burst as a spectacular supernova on hold, the outlet points out. If the idea is correct, it could mean that the red giant was rejuvenated at some point, which misled scientists about its age.