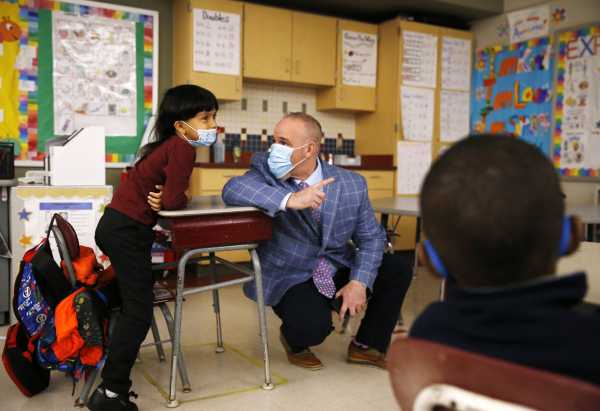 Almost as soon as some schools reopened for in-person learning in the fall of 2020, research was suggesting a tidy, albeit dark, conclusion about why they did: politics. Early analyses indicated that Covid-19 health factors had virtually nothing to do with reopening decisions, and partisan politics could explain nearly all the variation.

There were early signs that this narrative didn’t explain the full story. If allegiance to former President Donald Trump (in schools that opened) or teacher unions (in those that stayed closed) were all that mattered, why did support for reopening schools also drop among Republican voters over the summer? And what about the conflicting recommendations coming from federal health and education departments at that time? Nevertheless, the idea that Covid-19 was not a real factor was repeated by some of the nation’s most influential journalists and media outlets, and framed as though the question was generally settled.

This is typical in policy research: Initial waves of data often attract lots of attention, and can quickly ossify into conventional wisdom. When subsequent, often deeper inquiry reveals alternative or more nuanced explanations, it tends to receive far less notice.

That’s what’s been happening with research into school closures. More recent studies have found that, far from being irrelevant, Covid-19 indicators were among central factors predicting whether schools would reopen.

Researchers say they also still haven’t fully understood how other factors — like school governance and parent preferences — influenced Covid-19 school decisions. A new study, published recently by two education researchers from George Mason University, replicates some earlier findings and explores new potential variables. All in all, it continues adding to a picture that’s more complex than the early analyses suggested.

This debate might seem moot: Schools have been back to in-person learning this school year, and parents largely report satisfaction with their child’s progress. But the consequences of these decisions continue to linger. Many educators say things have not yet returned to normal. Empirical research suggests some of the most negative academic effects were experienced disproportionately by low-income students and students of color. Moreover, future pandemics remain a threat, and district leaders may one day again be charged with navigating similar circumstances.

A new study reinforces that school opening decisions were complicated

The narrative that school reopening decisions were all about politics coalesced early. One of the first pieces of evidence came from a Brookings Institution blog post published in July 2020, where senior fellow Jon Valant found “no relationship” between school districts’ reopening plans and their per-capita Covid-19 cases, but a strong one between districts’ plans and county-level support for Trump in the 2016 election. The implication was that communities that take their cues from then-President Trump were more willing to resume in-person instruction.

But as time passed, and more schools reopened, the picture grew more complicated. A July 2021 analysis compared fall 2020 reopening factors to those in spring 2021. Tulane economists Douglas Harris and Daniel Oliver found Covid-19 rates were one significant predictor of fall school reopening. Over time, the role of both politics and health factors declined, Harris and Oliver observed, while the demographics of a given community remained a strong predictor throughout the year. (This was knotty, they note, given the “close interplay between demographics, parental work situations, and COVID health risks.”)

The latest addition to the research literature was published this month by two George Mason professors, Matthew Steinberg and David Houston. Their working paper — which has not yet been peer-reviewed — affirmed some of the core findings of earlier studies: Higher rates of in-person instruction during fall 2020 occurred in areas with weaker unions and that leaned Republican, and rates of Covid-19 were correlated with reopening decisions.

The new paper looks at how factors predicting in-person schooling changed over the course of the 2021-21 academic year. Covid-19 case and death rates, political partisanship, and teacher union strength became “less potent predictors” over time. As the year stretched on, Steinberg and Houston also observed that communities with a history of higher standardized test scores grew significantly more likely to reopen school buildings than their lower-achieving counterparts.

“This pattern may help us understand the widening test score gaps that have emerged in the wake of the pandemic,” they write.

Sarah Reckhow, a political scientist at Michigan State University who was involved in a study that found local school district decisions were heavily tied to political partisanship and union strength, called Houston and Steinberg’s study “great” — and noted the importance of replication in policy research.

While her own research found school reopening to be less tied to Covid-19 severity, she said there was still a relationship to Covid-19 rates observed in some aspects of their model.

Harris told Vox he agreed with the new working paper’s conclusions — that reopening was about more than just politics — which largely mirrored his prior research. He also praised the new study for tracking how factors that seemed to drive in-person instruction changed over time. “That was novel and interesting and important,” Harris said.

Steinberg and Houston’s study leveraged county-level data from a private firm, Burbio, which tracked in-person and virtual learning for nearly half of all public school students during the pandemic. Covid-19 case and death rates, and partisanship measured by presidential vote share, are also all reported at the county level. Most counties, however, contain multiple school districts, which is why other researchers have preferred a school district-level analysis.

“There are a lot of analytic choices that go into descriptive analyses of imperfect data, and we do not have a strong bone to pick with the other studies,” Steinberg told Vox, but emphasized that many of these minor choices can have “nontrivial implications” for interpreting results.

Brad Marianno, an education policy researcher at the University of Nevada Las Vegas, told Vox he is skeptical of Burbio’s ability to accurately capture in-person instruction rates, and thought a school district-level analysis (like one he published earlier this year) would have been better than a county-level approach. Still, he praised the new paper, including for performing its analysis over time. “We need multiple efforts at the question, especially efforts that employ similar and different datasets and measures, to really triangulate a data-driven answer,” he said.

Sarah Cohodes, a Columbia University economist who has studied pandemic differences between charter schools and traditional public schools, said there is no right or wrong answer when it comes to measuring by county or school-district levels. “You’re damned if you do and damned if you don’t,” she told me, though she reiterated that it depends on the research question.

One of the most novel elements of Steinberg and Houston’s study is their suggestion of a previously unexplored factor predicting in-person instruction: local support for teachers. Using multiple surveys with different sampling strategies and question wordings, the George Mason professors found that pre-pandemic support for increases in educator pay was consistently associated with higher rates of in-person instruction during the pandemic. In other words, areas where the public was more supportive of raises for teachers were also more likely to have in-person learning.

Other education policy scholars told Vox they’d need more time to consider that connection. Reckhow called it “a really intriguing result” but one that left her with “many questions” about the underlying mechanisms that might explain the finding. “Without more information, it’s hard for me to develop a fully satisfactory explanation,” she said.

Steinberg stressed that what he sees as so “revelatory” about this finding, which was based on data from two different nationally representative surveys, is that it suggests to him there was something about communities that valued their teachers more highly that potentially made it easier for schools to open for in-person learning.

“Some of these little p-politics in communities matter, and whether or not there is preexisting trust could make the logistical complexity of reopening manageable for leaders or unmanageable,” he said.

As time marches on, it can be easy to forget just how acute the uncertainty was for school administrators during the 2020-21 school year, particularly before vaccines were available. Everything looks crisper in hindsight. But given the tremendous implications for students, schools, and families — and that administrators may one day again find themselves in similar positions — researchers will likely study those decisions for years to come.