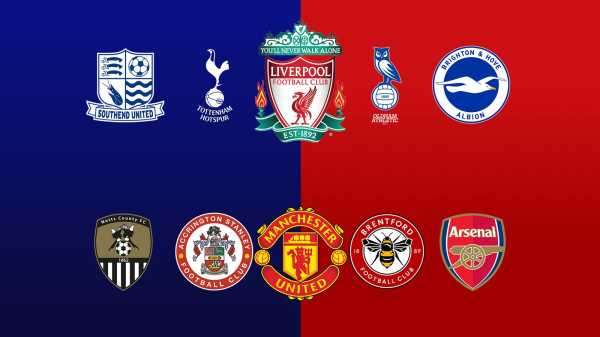 Which is the top club in the land? Which teams are punching above their weight and which historic powerhouses languish in the lower divisions? This year’s Ultimate League has arrived…

The Ultimate League factors each club’s average league position over the past 50 years and includes every club that has featured in England’s top four tiers for at least 10 seasons during that period.

Liverpool remain England’s top club with a remarkable average position of 3.3 over the last half a century, while Manchester United stave off Arsenal narrowly for runners-up spot.

Tottenham complete the half-century top four, with the Gunners edging their north London rivals – unlike the case in the final Premier League standings this term, with Antonio Conte’s side claiming the final Champions League spot. 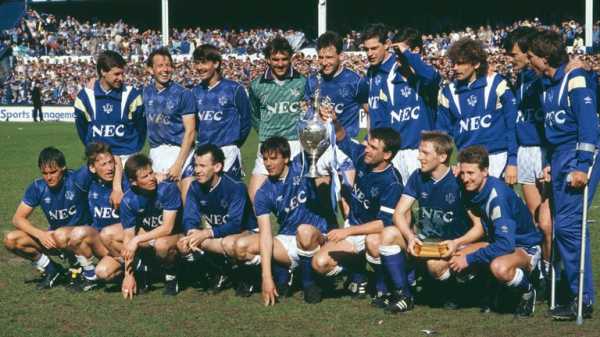 Everton’s continuous top-flight presence during the period, which came under threat during the relegation battle this season, in addition to title-winning campaigns in the early ’70s and mid ’80s, places the Toffees in fifth spot.

Chelsea and reigning champions Manchester City have enjoyed considerable success in recent years, resulting in the teams surging into sixth and eighth spots, respectively. Indeed, City had slipped into the third tier 24 years ago.

Aston Villa rank above Pep Guardiola’s dominant juggernauts, despite only securing promotion back to the top flight three years ago after three seasons in the Championship.

A raft of second-tier sides are among England’s top 20 clubs, including Middlesbrough, Nottingham Forest, West Brom, Ipswich and QPR, as well as freshly-relegated Norwich and Derby – who were relegated to League One after being hit with a 21-point deduction this term. 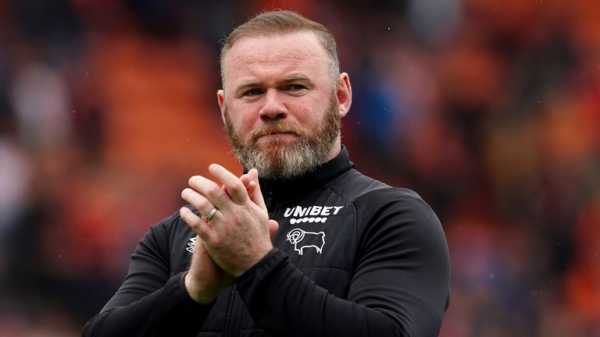 Image: Wayne Rooney's Derby failed to avoid the drop to League One after being hit with a 21-point points deduction

Ipswich, Derby, West Brom, Middlesbrough, QPR and Everton are the biggest underachievers in the top 20 – all ranging between 37 and 11 positions below their historic average.

Oldham are England’s biggest underachievers, languishing 45 places below their 50-year average, after suffering relegation from the Football League for the first time in 115 years, followed by Notts County (-44) – one of the original founding members of the league in 1888.

However, County face Grimsby in the National League play-offs on Monday in an effort to rejoin the Football League after dropping into the fifth tier two years ago. 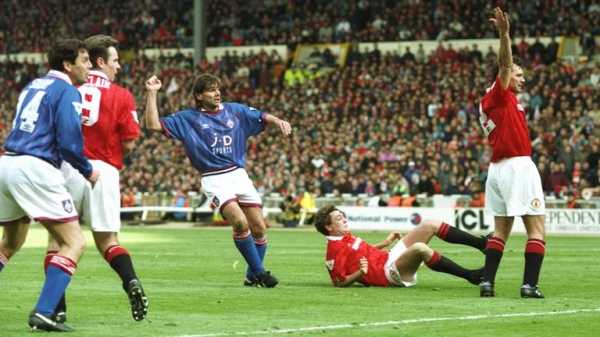 In addition to Grimsby (-32), Southend (-38) and York (-34) also dropped out of the top four tiers and are serious underachievers based on historical stature – but League One play-off winners Sunderland (-28) and Charlton (-26) also belong among the higher rungs. 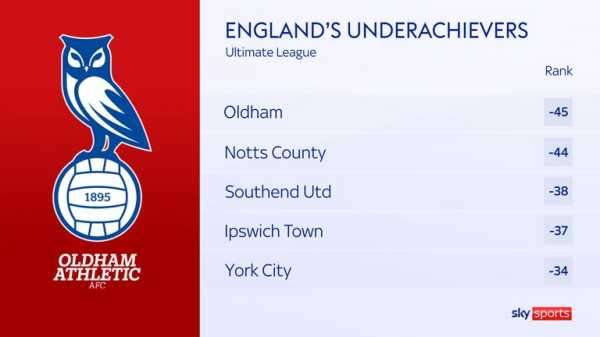 In contrast, Accrington are punching a chart-topping 38 places above their 50-year average, with Wycombe (+35), Burton (+33), Fleetwood (+32) and Cheltenham (+31) all outperforming their historical standings. 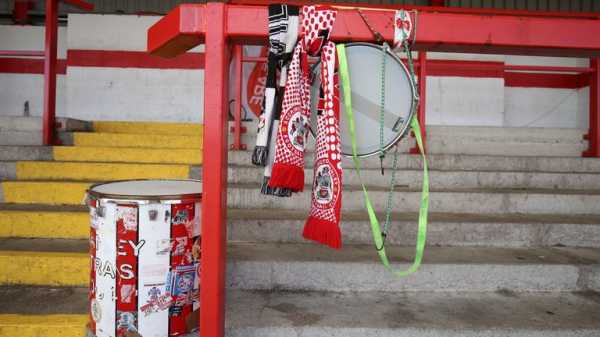 Image: The current Accrington Stanley was formed in 1968, two years after the collapse of the original team, which played in the Football League from 1921 to 1962

Other notable overachievers include Fulham (+12) after the Cottagers secured promotion to the top flight this term and Crystal Palace (+11) – who enjoyed a renaissance campaign to finish 12th in the Premier League under Patrick Vieira. 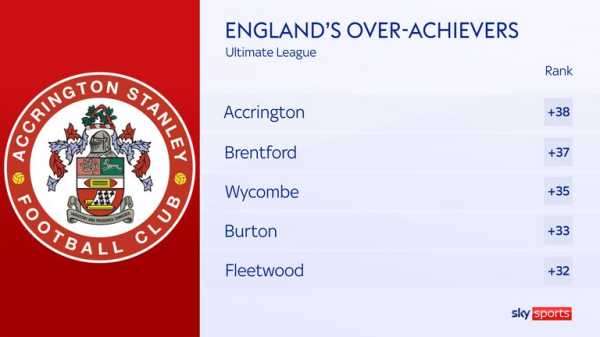 If reading on skysports.com, comment at the bottom of this article to get involved in the debate, but please adhere to our House Rules. If you wish to report any comment, simply click on the down arrow next to the offending comment and click ‘Report’.