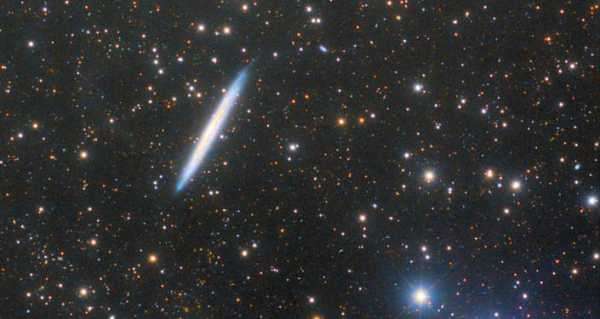 The Oort cloud is a hypothetical spherical cluster that encircles the most distant frontiers of our solar system. The existence of the Oort cloud is regarded as the most likely source for long-period comets, among which could be celestial bodies that came from much more distant areas – the interstellar medium within our galaxy.

According to calculations made by astronomers Amir Siraj and Avi Loeb, the Oort cloud may contain 100 trillion interstellar objects, although popular theory surrounding the formation of planetary systems suggests that there should be fewer “alien” objects than celestial bodies originally located in the Oort cloud.

Interstellar objects are extremely difficult to detect as they do not emit light on their own. Astronomers can observe them only if occlude background objects, pass through our solar system near the Sun, or separate from the Oort cloud and move in a highly-elongated hyperbolic orbit unrelated to our star’s gravity.

This Oct. 12, 2019 photo made available by NASA shows the comet 2I/Borisov, seen by the Hubble Space Telescope. It’s the second known interstellar visitor to swoop through our backyard. An amateur astronomer from Crimea, Gennady Borisov, discovered the comet in August, two years after the first alien guest, a cigar-shaped rock, popped up

So far, there have been only two interstellar objects recorded; the ʻOumuamua asteroid, found in 2017, and the 2I/Borisov comet, discovered in 2019. As the existence of distant objects, such as the Oort cloud itself, is yet to be proven, calculations that astronomers are making suggest significant inaccuracies.

Scientists also note that the inner regions of the solar system are also filled with interstellar objects, but humans are unable to identify them because we lack the technology.

Scientists believe that when the new Earth-based Vera C. Rubin Observatory goes online 2022, it will help to identify these numerous interstellar guests.