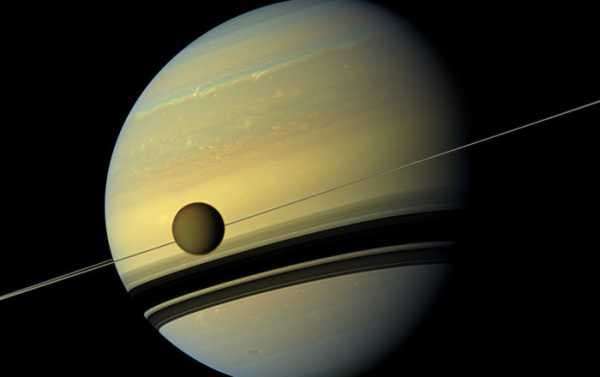 Yes, we have long been charmed with Titan, the distant moon that goes round gas giant Saturn, and perhaps even more so, after a new curious detail has been revealed.

NASA has proved the presence of vinyl cyanide on the moon Titan. And, most significantly, the chemical compound could potentially be used in the structural makeup of cells to devise animate creatures that could survive in the moon’s methane oceans, a press-release on Phys.org website reads.

The speculations surrounding the environmental conditions on Titan, whether or not they are suitable for living organisms, started a long time ago, and have continued ever since.

Notably, we first caught a glimpse of what looked like vinyl cyanide “soup” thanks to data provided by the famed multinational Cassini space probe, which has been studying planet Saturn and its satellites since 1997.

Now, though, scientists have essentially managed to confirm that a form of hydrocarbon soup exists on Titan, and that, still with some reservations, life might be able to form and thrive even in harsh environmental conditions typical of Saturn’s moon.

In particular, what has been proved this time, thanks to the efforts of researcher Maureen Palmer from NASA’s Goddard Space Flight Center, is that vinyl cyanide is present in one of Titan’s lakes in such tremendous quantities that chances are it will naturally get caught up in the methane cycle, pouring down on the whole moon and definitely up into the atmosphere to help shape the membranes of hypothetic microorganisms, which might be living there.