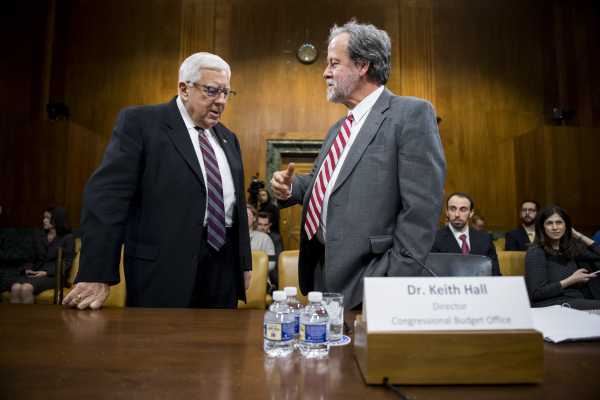 Republicans aren’t quite done taking the Congressional Budget Office — the independent and highly respected body charged with evaluating the impact of legislative proposals — to task.

On Tuesday, the House Budget Committee, chaired by Rep. Steve Womack (R-AR), began the first of a five-part “oversight” series on the Congressional Budget Office Tuesday. The Senate Budget Committee held a CBO oversight hearing last week — the third under Chair Mike Enzi (R-WY)’s leadership in the past three years.

Womack assured the body that the hearings were “not designed to be partisan or to invite ‘cheap shots’ against an agency so vital to the Congress’s ability to budget independently,” but the nearly three-hour first session was still a venue for airing partisan grievances.

At one point, Rep. Rob Woodall (R-GA), suggested the CBO’s language that said passing the House’s health bill would “increase the number of people uninsured” was partisan, and the CBO “could have said is that we are going to increase health care freedom.”

The CBO became something of a Republican punching bag last year after it published several less-than-favorable projections on the GOP’s tax and health care proposals, including reports that showed the Obamacare repeal bill would leave millions more uninsured.

A group of conservative lawmakers even proposed cutting the CBO’s budget by 30 percent, proposing instead an aggregation of reports from four private think tanks: the Heritage Foundation, the American Enterprise Institute, the Brookings Institution, and the Urban Institute.

In July, eight former CBO directors felt the institution was so under siege they wrote a letter to congressional leadership “to express our strong objection to recent attacks on the integrity and professionalism of the agency and on the agency’s role in the legislative process.”

The CBO has been off in its projections in the past (although its original Obamacare analysis was still closer than most competitors), and it’s still the only official and nonpartisan estimation of the effects of legislation used by the Senate parliamentarian to ensure legislative is compliant with budget laws.

Meanwhile, the hearings come at a busy time for congressional budget committees, as Democrats and Republicans barrel toward yet another government shutdown deadline without an agreement on budget caps, the upper limit for military and domestic program spending.

Nevertheless, nothing will stand in the way of oversight. The next hearing is on February 6, in case you wanted to tune in. Here’s what’s on the docket:

It’s still not clear what actual changes — if any — will come of these hearings.