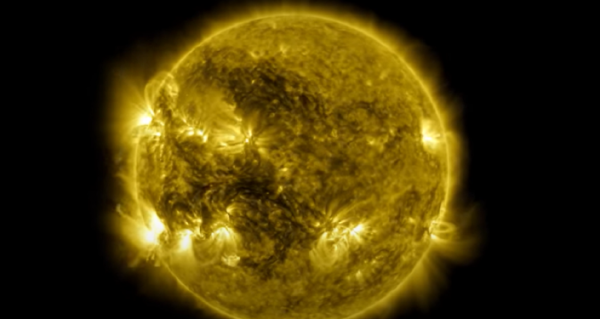 Neutrinos are neutral, subatomic, “ghostly” particles with a mass close to zero. The mass of neutrino is much smaller than any other known elementary particle. Solar neutrinos are created in the sun during the process of nuclear fusion, when two or more atomic nuclei combine to form different atomic nuclei and subatomic particles.

In new research published Wednesday in the journal Nature, scientists revealed that they have detected neutrinos in the sun. Neutrinos can be traced to a carbon-nitrogen-oxygen fusion known as the CNO cycle, which is a process of stellar nucleosynthesis.

“It’s really a breakthrough for solar and stellar physics,” said Gioacchino Ranucci of the Italian National Institute for Nuclear Physics (INFN), one of the researchers on the project, told NBC News.

Almost all stars, including the sun, release energy by fusing hydrogen into helium. In the sun’s case, 99% of the energy released comes from proton-proton fusion, which releases beryllium, lithium and boron, before they are broken down into helium.

The detector is the world’s most radio-pure liquid scintillator calorimeter. A scintillation counter is an instrument used to detect and measure ionizing radiation, while a calorimeter is an apparatus used to measure the amount of heat involved in a chemical reaction.

“This is the first evidence that the CNO cycle is at work in the sun and the stars,” Ranucci pointed out, NBC reported.

Gabriel Orebi Gann, a particle physicist at the University of California, Berkeley, also called the study’s findings “a major milestone.”

“This discovery takes us a step closer to understanding the composition of the core of our sun, and the formation of heavy stars,” Gann explained.