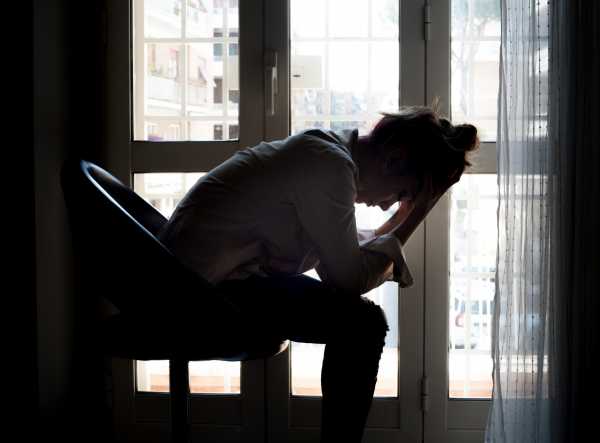 The recent suicides of celebrities Anthony Bourdain and Kate Spade have prompted many of us to look more closely at what may drive people to depression or to end their own lives.

One risk factor has gotten little attention in this discussion: the medications people take.

The 203 drugs the researchers identified aren’t obscure; they include some of the most commonly prescribed medications around — like birth control, beta blockers for high blood pressure, and proton pump inhibitors for acid reflux. (You can see the full list at the end of this article.)

Strikingly, the researchers from the University of Illinois and Columbia University discovered, people using these drugs had an elevated risk of depression compared to the general population. And the more medications with depression as a side effect people took, the more their risk of the disease increased. 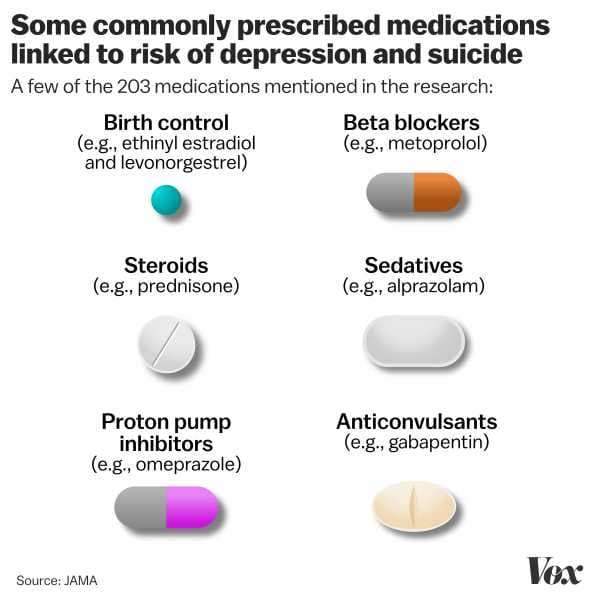 “It’s remarkable to know just how common it is that people might be at higher risk because of medicines they take,” said University of Pennsylvania psychiatry professor Michael Thase, who was not involved in the study. “Thinking about these [potential side effects] should be [doctors’] second or third step before they prescribe antidepressants. Sometimes de-prescribing [other drugs] is what’s needed.”

Since depression affects more than one in 20 adults in the US every year, and suicide rates have been steadily climbing here for years, these new findings are an important reminder that the drugs a person takes for one health condition may be making them sick in other ways.

Every medication comes with many possible side effects, and most of those side effects are rare. (Just think about the warnings highlighted on the drug commercials on TV.) If a side effect is listed on a package insert, it generally means at least 1 to 2 percent of people will experience it, said lead study author Dima Mazen Qato, a pharmacist and assistant professor of pharmacy at the University of Illinois Chicago.

To figure out how common depression and suicide-related symptoms (including suicide, or suicidal thoughts and behaviors) side effects were among the drugs Americans take, the researchers turned to the National Health and Nutrition Examination Survey, a government-run study that’s been tracking health trends in a representative sample of Americans since the 1970s.

If you or anyone you know is considering suicide or self-harm or is anxious, depressed, upset, or needs to talk, there are people who want to help:

Crisis Text Line: Text START to 741741 from anywhere in the USA, at any time, about any type of crisis

The International Association for Suicide Prevention lists a number of suicide hotlines by country. Click here to find them.

They combed through the drug use data on more than 26,000 people who participated in the study between 2005 and 2014 and found that Americans reported using 203 medications with depression and suicidal symptoms listed among their side effects. As of 2013-’14, 38 percent of adults reported taking drugs with depression as a potential side effect within the past 30 days, while 23 percent were using drugs that carried the risk of suicidal symptoms.

After the researchers figured out that these drugs were common, they wanted to see if there was any relationship between the people taking the drugs and an elevated risk of depression. To find this out, they turned to the NHANES survey again, which also tracks mental health. They discovered that the more drugs people reported taking, the higher their risk of depression and suicide.

To get a sense for how much of a risk of depression and suicide taking these drugs was associated with, let’s walk through the numbers.

In the total study population of more than 23,000 people (excluding the people on antidepressants), 6 percent reported depression. Among the users of just one of the drugs that have depression as an adverse effect, the prevalence increased to 7 percent. Among people taking two or more of the potentially depression-inducing drugs, the prevalence went up to 10 percent. And among people taking three or more of the drugs, the prevalence was 15 percent. (Again, for all these figures, the researchers excluded antidepressant users since they’d inflate the results.)

They found similar associations in non-antidepressant users who were taking medications with suicide symptoms. In the total study population, who weren‘t using medications with suicidal symptoms, 5 percent of participants reported suicidal symptoms. Among adults on one of these medications, the prevalence rose to 8 percent and among adults using three or more, the prevalence increased to 18 percent.

“It didn’t surprise me that there are a large numbers of drugs [with these side effects] and that these drugs are commonly prescribed,” said Olfson. “But what surprised me is that you can see this connection [to depression] in the general population, how strong it was, and that it builds up with each additional medication a person uses.”

Penn’s Thase called the findings “very suggestive” and ”strong circumstantial evidence” that taking one or more medications with depression as a potential side effect may increase a person’s risk of depression. While these medications work through different mechanisms, he said, it’s possible that when they‘re combined, those risks increase.

While the researchers did their best to statistically control for factors that may confound their results, like sex, age, race, and employment status, there were some things the paper can’t tell us.

Because this is an observational study and not an experimental study, the researchers stopped short of saying the medications caused the depression. To find that out, they’d need to do a follow-up study where they track people who start taking these medications over time and see if their risk of depression increases.

What’s more, there are many factors that can increase a person’s risk of depression and suicide, including one’s personal and family medical history and major life upheavals, and the researchers couldn‘t account for those. The sample in the study was also too small to drill down into the individual medications and their depression patterns.

But for now, the study is a powerful reminder that people know that certain medications carry the risk of depression and suicidal thinking, and that they should talk to their doctors about that when starting on a new drug.

“When you have a patient,“ said Thase, “and their story doesn’t fit the usual pattern — there are no setbacks in the person‘s life, no broken heart, no job difficulty, [doctors] should think of other possible masquerading causes — and the chance that medication could be the cause.”

For patients concerned about the side effects of their medications, this database from the National Institutes of Health lets you search for the side effects for most drugs and drug classes. We’ve also created a table of the 203 drugs the researchers found that had depression or suicidal symptoms as side effects:

Drugs with depression and suicide risks