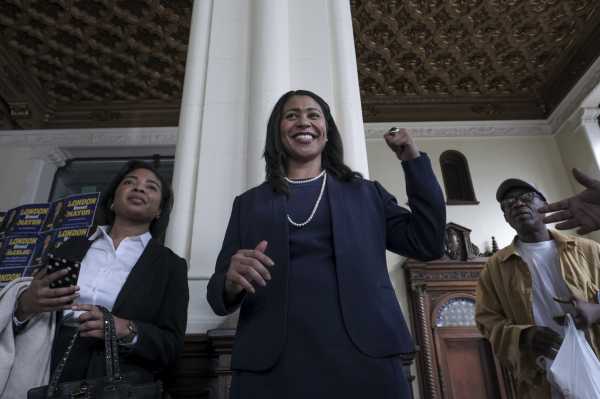 London Breed made history on Wednesday night when she became the first black woman to be elected mayor of San Francisco.

“I’m a native San Franciscan — I grew up in some of the most challenging of circumstances,” Breed told local reporters on Wednesday. “I think the message that this sends to the next generation of young people growing up in this city [is] that no matter where you come from … you can do anything you want to do.”

Breed, 43, has had a storied career in San Francisco politics, first winning election to the city’s Board of Supervisors in 2012 and becoming president of the board in 2015. She was appointed acting mayor of the city shortly after Mayor Ed Lee died suddenly of a heart attack last year, but the city’s Board of Supervisors later removed her from the position, saying that her dual roles as board president and acting mayor gave her too much influence as a mayoral candidate.

That decision drew criticism from some of the city’s black residents, who were angry that the board replaced a black woman with a white acting mayor.

Then on June 5, San Francisco held a special election to replace Lee. Breed led her fellow candidates, but due to San Francisco’s ranked-choice voting system, she remained in a tight battle with Mark Leno, a former state senator who ran on a progressive platform. Leno conceded on Wednesday, however, and Breed is expected to take office in July. She‘ll serve as mayor until 2020, finishing out the rest of Lee’s term.

Breed, a moderate, campaigned on a number of issues, including improving San Francisco‘s extensively documented housing and homelessness crisis. The city’s black population has been particularly affected, and has dropped considerably in recent decades as a lack of affordable housing prompted many to leave San Francisco.

On Wednesday, Breed said that she wants her election to inspire others. “I’m so hopeful about the future of our city,” she said.

And her success comes at a time when black women, long a crucial Democratic voting bloc, are demanding more political power. In 2017, a number of black women announced mayoral campaigns, leading some to call 2017 “The Year of the Black Woman Mayor.”

While not every one was elected, there were some victories, including in Charlotte, North Carolina, where Vi Lyles became the city’s first black woman mayor, and New Orleans, where LaToya Cantrell accomplished the same feat. And in December, Keisha Lance Bottoms became the second black woman to win the mayoral race in Atlanta following a bruising contest that almost led to the first nonblack mayor elected in the city in 44 years.

There are a small number of black women leading large cities, but the 14 largest cities in America are all led by men, the vast majority of whom are white. Breed’s election will make her the first black woman to enter that exclusive group.

The San Francisco election also comes amid a contentious debate about the Democratic Party’s treatment of black female candidates, with some critics arguing that the party has not done enough to support black women running for office.

Regardless, there‘s no question that black women themselves have worked together to boost black female candidates across the country, most recently pushing Stacey Abrams to victory in Alabama’s Democratic gubernatorial primary and making her the first black woman to secure a party nomination for governor.

“Black women are ‘sick and tired’ of being thanked by progressives for being their most loyal voting base,” Melanie Campbell, president and CEO of the National Coalition on Black Civic Participation and the Black Women’s Roundtable, said in a statement shortly before Abrams’s election. ”Black women are demanding that the progressive movement show us they respect our leadership and the power of our vote, by investing more in Black women running for office; and Black women-led organizing and institutions.”