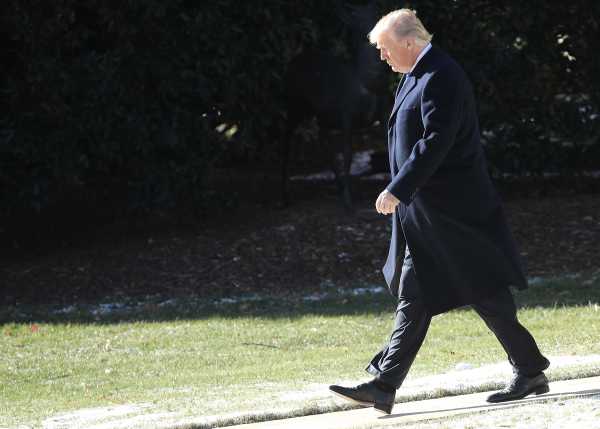 People are questioning President Trump’s bodyweight as part of the newly coined online “girther” movement, after the results of his first physical as president were released Tuesday.

A play on the “birther” movement — the conspiracy theory that Barack Obama was born outside of the United States, an idea Trump helped perpetuate — “girthers” don’t believe that Trump’s doctor, Ronny Jackson, reported the president’s true weight. They’re even demanding to see Trump’s “girth certificate.”

In a press conference Tuesday, Jackson said Trump is 6-foot-3 and 239 pounds — one pound shy of an obesity classification, according to the body mass index, a measure of obesity that uses a person’s weight divided by their height squared. (If you’re curious, you can check your BMI using this online calculator.)

That would mean Trump’s BMI is 29.9, just short of the 30 cutoff that would place him in the obese BMI category.

Trump’s near obesity, according to his BMI, has stirred speculation over whether Jackson is lying about Trump’s weight or glossing over the truth about his health.

But it’s worth remembering that BMI is an imperfect measure of obesity and health, and it has been for a long time. That means photos comparing Trump to athletes that are circulating online are unfair and misleading.

You can’t necessarily look at a picture of a person and figure out which BMI category they fit into, or judge their health from their apparent weight, especially an older person like 71-year-old Trump.

BMI is an imperfect measure of body composition

We do have an obesity and overweight problem in the US, and there’s good reason for doctors to have measures to identify these problems. According to the National Institutes of Health, “The higher your BMI, the higher your risk for certain diseases such as heart disease, high blood pressure, type 2 diabetes, gallstones, breathing problems, and certain cancers.” That’s why doctors are inclined to use BMI with their patients.

But BMI has a lot of limitations. Its main flaw is that it’s an indirect measure of body fat that doesn’t take into account important details about age, sex, bone structure, and fat distribution, one study in the International Journal of Obesity explained. Again, it’s just two numbers: weight divided by height squared.

This can lead to misdiagnoses for pretty intuitive reasons, especially in older people, the researchers wrote. “A person’s percentage of body fat is known to increase with age, whereas muscle mass decreases, but the person’s weight and height do not necessarily reflect such changes in body fat and muscle mass. Some elderly persons who are portly but have low muscle mass have normal or even low BMI scores, an underestimation of body fat.”

Conversely, muscular and athletic folks — including actors such as Tom Cruise — may be placed in the overweight and obese categories, since their lean muscle can weight a lot.

That’s why someone with a low muscle mass who looks overweight can have the same BMI — or even the same bodyweight — as a bodybuilder. That’s also why the photos comparing Trump to athletes that are circulating online are misleading.

Why we still use BMI

But even with its flaws, BMI is definitely not a useless measure. First, it’s not always wrong. As NIH obesity researcher Kevin Hall explained in the Washington Post, “Despite its limitations and notorious counter-examples, BMI … correctly categorizes people as having excess body fat more than 80 percent of the time.”

Second, no good alternative has yet caught on. People have proposed more accurate measures of body fat, like MRI scans or “underwater weighing” — in which patients are submerged in a tank of water to calculate their body volume, density, and body fat. And since researchers know “abdominal obesity” (or belly fat) is especially problematic for health, waist circumference or waist-to-hip ratio has also been proposed.

But MRIs are expensive, and “underwater weighing” is both costly and labor-intensive. Waist measurements can be error-prone, since there’s no standard way to do them.

So BMI persists as a measurement. But we should just remember that it’s not the final answer about a person’s health — even the president’s. And we definitely shouldn’t use BMI to shame people. As Yoni Freedhoff, an obesity doctor based in Canada, wrote on Twitter, the BMI-fueled girther movement is “sure is doing a kick-ass job at perpetuating fat shaming, weight hate, and gluttony/sloth narratives.”