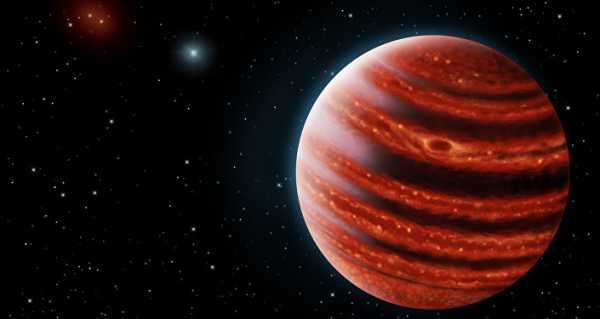 The newly tested method has proved to be a real milestone in the detection of exoplanets, currently the top priority endeavour undertaken by astronomers and astrophysicists.

After more than a year of painstaking observations of a cool star, the red dwarf TVLM 513–46546, 35 light-years from Earth, astronomers have succeeded in catching a glimpse of a previously unseen Saturn-size exoplanet. The research has been published in The Astronomical Journal.

It is not, however, the object that is most remarkable in the endeavour but the method the scientists used to keep track of the movement of the star through the galaxy. In particular, they managed to register and record a wobble, or rather wiggling that is typical of the star’s pace affected by its circling exoplanets.

The approach is called the astrometric technique, and this is the first time it’s been successfully deployed using a radio telescope – the continent-wide Very Long Baseline Array (VLBA).

“The VLBA, with antennas separated by as much as 5,000 miles, provided us with the great resolving power and extremely high precision needed for this discovery”, said Amy Mioduszewski, of the National Radio Astronomy Observatory. “In addition, improvements that have been made to the VLBA’s sensitivity gave us the data quality that made it possible to do this work now”, she added.

The technique is notably complementary to a wider one – the radial velocity method, like Doppler spectroscopy, one of the more common methods for finding exoplanets.

The latter means that regarding stars with massive, closely orbiting exoplanets, their gravitational effect may be observed in the way light wavelengths are stretched or compressed as the star moves around. In the astrometric technique, conversely, rather than analysing alterations in wavelengths, the astrometric technique focuses on tell-tale deviations from a straight path of movement.

The method, which has been known since the 19th century but revisited now with the advent of high-resolution telescopes, can be used to detect exoplanets that Doppler spectroscopy can’t, such as exoplanets moving in larger orbits around their stars.

“Our method complements the radial velocity method which is more sensitive to planets orbiting in close orbits, while ours is more sensitive to massive planets in orbits further away from the star”, said Gisela Ortiz-Leon of the Max Planck Institute for Radio Astronomy in Germany.

More than 4,300 planets have been teased out in the galaxy circling in orbits around stars other than the Sun, but the planet near TVLM 513–46546 is only the second to be found using the astrometric technique.

The ultimate success of the latest research underpins the promise of radio telescopes combined with the astrometric technique in finding planets that other techniques can’t detect, with an estimated tens of thousands of new extrasolar planets expected to soon be known to humanity.