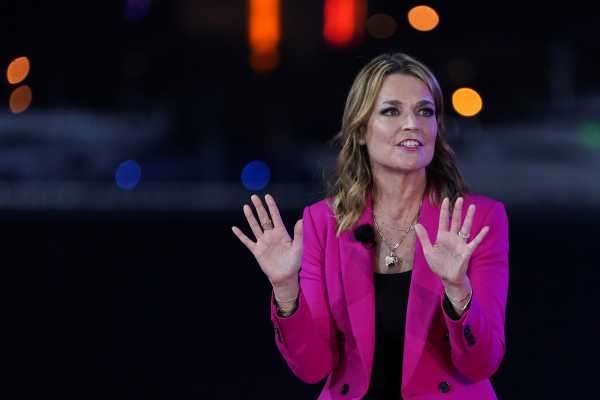 Some 28 years ago, then-Republican National Committee chair Rich Bond explained to a group of Washington Post reporters why he and the Bush-Quayle 1992 campaign complained so much about the press. Some of it was sincere frustration, “But there is some strategy to it,” Bond said. “I’m a coach of kids’ basketball and Little League teams. If you watch any great coach, what they try to do is ‘work the refs.’ Maybe the ref will cut you a little slack on the next one.”

Working the refs — that is, yelling at the media so they give you a pass next time for fear of looking biased or sparking another outraged reaction — is not solely a tool of the right. But it’s especially effective on the right, given that reporters really do tend to be more liberal than the general population in their own personal politics.

And ref-working was in full force on Thursday night after NBC News’ Savannah Guthrie conducted perhaps the toughest interview to date with President Trump, as part of a primetime televised town hall.

Fox News was among the earliest to declare that Trump was being persecuted by a biased moderator. “NBC fake news did their best to ambush President Trump at tonight’s town hall,” Sean Hannity declared as he began his 9 pm show on the network. The network’s Greg Gutfeld spent the evening being extremely mad online; among other complaints, he declared that Guthrie was putting Trump through “a horrible show trial.”

Even before the event was up, the Trump campaign sprung into action to gripe. Alyssa Farah, the White House’s director of strategic communications and veteran Trump administration press aide, used a break in the programming to walk over and speak with Guthrie; after the debate, the campaign put out a statement saying, “President Trump soundly defeated NBC’s Savannah Guthrie in her role as debate opponent and Joe Biden surrogate. President Trump masterfully handled Guthrie’s attacks and interacted warmly and effectively with the voters in the room.”

White House press secretary Kayleigh McEnany tweeted furiously through the event on her personal account, including retweeting one account that declared “Savanah [sic] Guthrie sounds like she’s screaming at an ex-lover”: 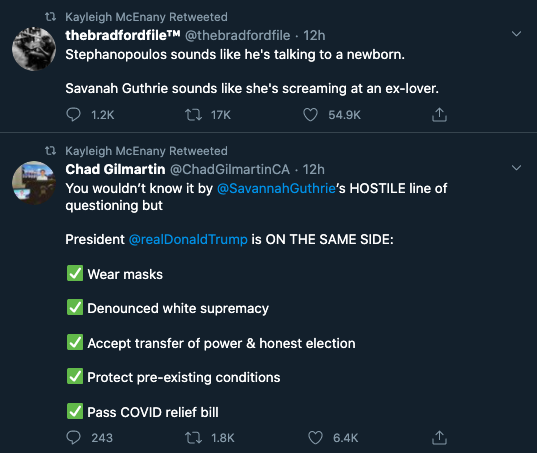 Other conservatives, like the Daily Wire’s Ryan Saavedra, attempted to make a folk hero of one audience member, a Black woman who nodded approvingly to some of Trump’s answers.

There is not yet any polling on how viewers of the town hall perceived it, and if they reported feeling more positively or negatively about Trump afterward. Anecdotally, Republican pollster Frank Luntz said the takeaway from his focus group of 15 undecided voters was that “the more Trump speaks, the worse he looks.”

However, in many ways, the public’s reaction is beside the point for this kind of strategic Republican whining. If the point is to work the refs, the real target of these complaints is Kristen Welker, Guthrie’s NBC News colleague who is set to host the final presidential debate this season.

If Welker is spooked by the venomous reaction among conservatives and the Trump campaign toward Guthrie, she may work to avoid seemingly overly harsh on the president. And the effect of such a strategy on her part might be an event less like Thursday’s town hall and more like the first presidential and vice presidential debates, where moderators were plainly unable to interrupt, fact-check, or hold to account the participants, Trump especially.