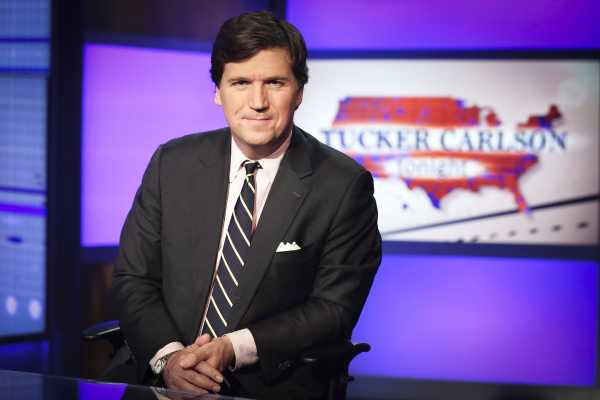 This week, America’s most watched cable news host is broadcasting from an authoritarian state — not to criticize its leadership but to praise it.

Fox’s Tucker Carlson is currently in Budapest, airing his show from Hungary’s capital city. In his Monday monologue, Carlson told his listeners that they should pay attention to Hungary “if you care about Western civilization, and democracy, and family — and the ferocious assault on all three of those things by leaders of our global institutions.” He tweeted out a friendly photo with Hungarian Prime Minister Viktor Orbán and is confirmed to speak at a government-supported conference in Budapest on Saturday.

Make no mistake: Fox’s marquee host is aligning himself with a ruler who has spent the past 11 years systematically dismantling Hungary’s free political system.

A 2021 report from V-Dem, the leading academic institute assessing the state of global democracy, found that Hungary crossed the line into autocracy in 2018. In March, Orbán’s Fidesz party was pushed out of the EPP, an alliance of center-right European parties, because its European peers felt it had strayed too far into authoritarian territory.

Despite the increasingly clear evidence that Hungary has abandoned democracy, many conservative intellectuals in America have come to see the Orbán regime as a model for America.

These right-wing observers, typically social conservatives and nationalists, see Orbán’s willingness to use state power against the LGBT community, academics, the press, and immigrants as an example of how conservatives can fight back against left-wing cultural power. They either deny Fidesz’s authoritarian streak or, more chillingly, argue that it’s necessary to defeat the left — a chilling move at a time when the GOP is waging war on American democracy, using tactics eerily reminiscent of the ones Fidesz successfully deployed against Hungary’s democratic institutions.

Carlson’s visit to Budapest, a follow-up to previous pro-Orbán coverage, shows that this authoritarian envy is no longer confined to a fringe.

To understand why the American right’s admiration for a small Central European state is so concerning, it’s important to understand exactly how democracy in Hungary died.

For roughly the first two decades of Hungary’s post-communist history, 1990 to 2010, Hungary was a young but stable democracy. When Orbán was elected prime minister the first time, in 1998, he governed as a relatively conventional European conservative; when Fidesz lost the 2002 elections, a new prime minister from the rival Socialist party took over.

But though Orbán stepped aside, he and his followers never really accepted the 2002 defeat as legitimate. When Fidesz returned to power after the country’s 2010 election, winning a two-thirds majority amidst the Great Recession and incumbent corruption scandals, the party set about seizing complete control of the Hungarian state — turning it into a machine designed to subtly lock the opposition out of power without having to formally abolish elections.

Orbán and his allies gerrymandered parliamentary districts and packed the Constitutional Court. They seized control over the national elections agency, the civil service, and over 90 percent of all media in Hungary. They used economic regulation to enrich themselves and punish their opponents — persecuting a major university, for example, until it was forced to leave the country altogether.

“Hungary is not a democracy anymore,” Zsuzsanna Szelényi, a former Hungarian member from Prime Minister Viktor Orbán’s party, told me when I met her in Budapest in 2018. “The parliament is a decoration for a one-party state.”

Fidesz justified its power grabs by demonizing a series of outgroups and external enemies. If you read the state-aligned press, you’ll learn that only Viktor Orbán can save Hungarian civilization from the threat posed by Muslim immigrants, liberals in the European Union, the LGBT community, and the Jewish billionaire George Soros.

Orbán won reelection in 2015 and 2018, in votes that were formally free but in no sense fair. Fidesz benefitted from massive resource advantages, backing from government-aligned media, and rules designed to tilt the playing field. Though Orbán’s party won less than 50 percent of the vote in the 2018 election, it still won a two-thirds majority in parliament — thanks in part due to gerrymandering.

Today, political scientists see Hungary as a textbook example of something called “competitive authoritarianism”: a kind of autocratic system where elections happen and aren’t formally rigged but are so heavily stacked in the incumbent party’s favor that the people don’t have real agency over who rules them.

“The sad thing is that the government can do whatever it wants,” activist Gergely Homonnay told me during my 2018 visit to Hungary.

Competitive authoritarian regimes survive, in part, by tricking their citizens — convincing enough of them that democracy is still alive to avoid an uprising. As such, Orbán claims his government is just a different kind of democracy — he calls it “illiberal democracy” or, alternatively, “Christian democracy” — that’s being persecuted by Western liberals who hate its socially conservative governance.

This democratic facade is easier to maintain at home thanks to a pliant press. What’s more surprising, and depressing, is that American conservatives like Carlson are choosing to help him out.

Tucker Carlson and the American right’s disturbing embrace of Orbán

The ideological affinities between Hungary’s rulers and the American right are fairly obvious, and they explain why figures like Tucker Carlson and Steve Bannon are increasingly describing it as a model for America.

Like American social conservatives, Hungary’s leader claims to stand for the traditional Christian family against progressives, feminists, and the LGBT community. Like American nationalists, Orbán despises immigrants and assails the European Union’s influence on his country (though he’s more than happy to accept billions in EU subsidies in order to prop up Hungary’s economy and enrich his allies).

How do those on the right address clear evidence of Orbán’s anti-democratic politics? Typically, they adopt a two-pronged and somewhat contradictory strategy — both denying that Orbán is an authoritarian and arguing that his repressive tactics are justified in response to progressive culture war aggression.

Take Rod Dreher, a senior editor at American Conservative magazine. Dreher, who is currently in Budapest on a fellowship at the state-funded Danube Institute, claims to have been instrumental in brokering Carlson’s visit — that he lobbied the Fox host to visit and worked with the Hungarian government to “clear the red tape” standing in the way of Carlson’s trip. There’s no Western thinker who more clearly exemplifies the right’s Orbánist turn.

In a Wednesday piece, Dreher mocks the very idea that the Hungarian leader might have destroyed democracy: “Golly, that Orbán must be an incompetent autocrat if he allows free and fair elections to take place, and he permits anyone to stand in the street in Budapest and denounce him.”

But later in the same piece, he argues that Orbán’s willingness to wield power against his cultural enemies is precisely what the American right needs to emulate.

“Which is the only power capable of standing up to Woke Capitalists, as well as these illiberal leftists in academia, media, sports, cultural institutions, and other places? The state,” he writes. “This is why American conservatives ought to be beating a path to Hungary.”

In Dreher’s mind, Orbán’s illiberalism is not anti-democratic but simply a defensive reaction to the left’s attempts to stamp out traditional cultural practices.

“The unhappy truth is that liberalism as we Americans have known it is probably dead. Our future is almost certainly going to be left-illiberal or right-illiberal,” he writes. “The right-of-center thought leaders who want to figure out how to resist effectively will be coming to Budapest to observe, to talk, and to learn.”

This siege mentality allows Dreher to justify admiring an authoritarian who has forcibly stamped out the free press without seeing himself as betraying democracy. Hungary’s government is not undemocratic but merely “illiberal” — an unsavory but necessary reaction to the left’s stranglehold on the cultural realm.

This two-step — it’s not really undemocratic, and it’s necessary to fight the left — is exactly how Republicans justify their own attacks on democracy at home.

Extreme gerrymandering, seizing control over local election boards, purging nonvoters from the voting rolls, stripping power from duly elected Democratic governors, packing courts with partisan judges, creating a media propaganda network that its partisans consume to the exclusion of other sources — all Republican approaches that, with some nouns changed, could easily describe Fidesz’s techniques for hollowing out from democracy from within.

The Republican turn on democracy is in significant part fueled by the right’s sense of leftist ascendancy — heightened by electoral defeats in 2008 and 2020 and strengthened by defeat in culture war battles like same-sex marriage. Dreher’s punditry on Hungary is an unusually honest expression of this attitude; he’s articulating what many on the right believe but are afraid to own too openly.

This, ultimately, is what makes Carlson’s pilgrimage to Budapest so worrying. The Fox host’s massive following gives him unusual power to set the terms of the conversation on the right; when he talks, Republicans from Trump on down listen. His bear hug embrace of Orbán could not only bring the Dreher view out into the open but also strengthen its influence over the GOP.

Republicans today aren’t directly imitating Orbán; they have their own anti-democratic playbook, drawn from all-American sources. Carlson’s active embrace of Hungary’s strongman risks making that connection more direct, giving Republicans more ideas for how to seize control and a more powerful sense of justification in doing so.