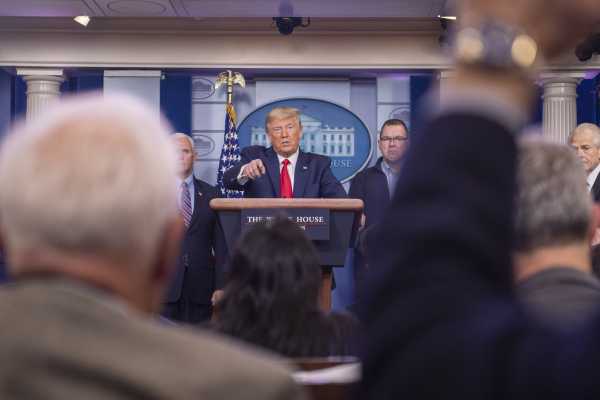 President Donald Trump loves to blame China for the coronavirus pandemic, but new information surfaced over the weekend that the administration eliminated a position last July that potentially could have helped the US get an earlier jump on a response to the crisis, suggesting the president may need to place blame a little closer to home.

The Trump administration told the United States’ embed at the Chinese Center for Disease Control and Prevention (CDC) that the position would be defunded, causing her to leave her post in July 2019, according to a report from Reuters’s Marisa Taylor. The embed helped train Chinese pubic health experts and served in part as a liaison between Chinese officials and their counterparts in the US.

With the administration planning to discontinue the role, the embed return to the US about five months before China began to see its first Covid-19 cases. Under normal circumstances, the embed likely would have passed information about the novel virus to US officials. Instead, Chinese officials were able for weeks to conceal the virus and the threat it posed, leading to a delay in the world’s response to what was then a matter of great concern and is now a pandemic.

When asked about his administration’s role in this decision during Sunday’s daily coronavirus press conference, Trump called on US CDC Director Robert Redfield to answer the question before attacking the press, saying, “This is just like the other stuff that you, not you, but the press was asking. We actually gave CDC more money, not less money — they said we defunded, it turned out it was more money. Every one of those things that was said were 100 percent wrong, and this sounds like another one.”

CDC funding has in fact gone up under the Trump administration — but in direct opposition to the president’s wishes. All of his budgets have requested that funding be cut, requests Congress ignored. It was only last week that the administration retracted its request for CDC funding cuts for 2021. And it has successfully eliminated public health positions it has control over.

Redfield came to the podium to claim, “The China office is actually being augmented as we speak. And we’ve been embedded there for over 30 years. There’s a reason they call it the Chinese CDC, because we’ve had that productive partnership.”

It isn’t clear what those augmentations are or when they will take effect. But Trump’s final word on the matter only served to underscore why the position was so critical.

“I wish [China] told us three months sooner that this was a problem,” the president said. “We didn’t know about it, they knew about it, and they should have told us, we could have saved a lot of lives throughout the world.”

The defunding of the US embed to China’s CDC, briefly explained

As Redfield mentioned, the US and China have long collaborated on matters of public health. As part of that collaboration, China has allowed the US to embed a public health official in its CDC.

Until July 2019, that embed was Dr. Linda Quick, an epidemiologist. Quick led a program that trained Chinese epidemiologists in methods for discovering, tracking, researching, and containing diseases — like Covid-19.

She reportedly came back to the US after being told her position would be discontinued in September 2019 in part due to the ongoing trade war between the US and China, and chose to return early, in July.

Once she came back to the US, she was not replaced by the US or any other foreign government, leading to a series of events that Bao-Ping Zhu, who held Quick’s position during the Obama administration, told Reuters was “heartbreaking to watch.”

“If someone had been there, public health officials and governments across the world could have moved much faster,” Zhu said.

Essentially, governments around the world might have been able to begin responding in early December, when the first Chinese cases were reported, rather than in late December, when China informed the World Health Organization it had begun to notice cases of a novel illness.

The US CDC has been dismissive of this view, and told Reuters that Quick’s absence “had absolutely nothing to do with CDC not learning of cases in China earlier.”

It is true Quick likely would have had to rely on those she’d worked with and others in her network to get information about the virus as China worked to minimize it. Former CDC epidemiologist Scott McNabb told Reuters that in his view, “based on circumstances in China, [Quick being on the ground] probably wouldn’t have made a big difference.”

But given the work Quick was doing, it isn’t out of the realm of possibility that she would have had access to those aware of what was going on, and that she could have passed that intelligence to the US.

Questions over what Quick could have done had she been allowed to stay in China come as the Trump administration faces numerous questions about its handling of the coronavirus pandemic, and as it weathers a great deal of criticism from health care providers and state and local officials about the speed and seriousness of its response.

When the Trump administration first realized the coronavirus would be a serious problem has been an open question. Redfield has said the CDC learned of the threat it posed on December 31; Health and Human Services Secretary Alex Azar said he learned January 3; Trump has said he was told sometime in late January or early February — a claim officials told the Washington Post is very much at odds with reality.

Regardless of when the administration learned, had the embed been in place, the US — and its allies — could have received factual information about the virus and Covid-19 far sooner than they did. Learning earlier may have led the administration to act earlier, and certainly would have given it more time to make plans around testing and the stockpiling and distribution of medical equipment that is currently in great demand and in short supply, like masks and ventilators.

And to Trump’s point, being able to act earlier would have led to lives saved — not just in the US, but in other countries as well.

It is, of course, impossible to definitively say that Quick’s position not being eliminated would have allowed us to avoid deaths or social distancing or a grim economic outlook. The coronavirus pandemic is a dynamic situation, with many, many factors affecting how we’ve ended up where we are. But it certainly seems that had Quick been in place as she was meant to be, the impact the virus has had might have been lessened.

A White House order to keep masks in the US could limit supply, companies warn

Trump could have reopened health care enrollment for coronavirus. He chose not to.