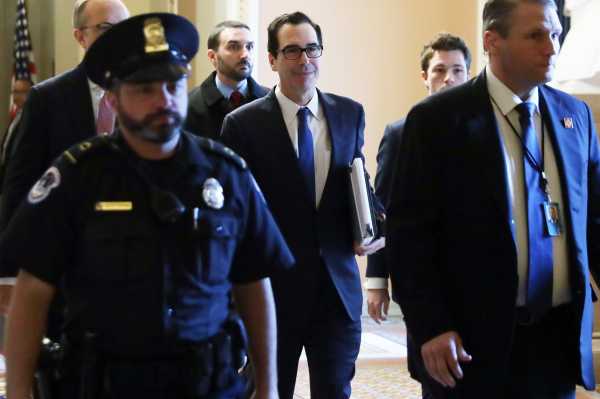 Most Americans agree: Coronavirus-related corporate bailouts need to come with some strings attached.

Washington lawmakers are currently negotiating a $1.8 trillion stimulus package to help boost the economy during the global pandemic that has brought much of the country to a standstill. One of the major sticking points of the debate on Capitol Hill: how to administer $500 billion in relief for big business and major corporations.

The proposal backed by the White House and Senate Republicans would give Treasury Secretary Steven Mnuchin wide discretion over which companies get money and when. Democrats in Congress are saying not so fast — they want some guardrails around what companies can and cannot do with the money once checks are cut. Otherwise, they argue, what’s to stop an airline from using its bailout money to give its CEO a bonus instead of paying its workers? Or to prevent a major hotel chain from laying off workers while engaging in stock buybacks?

Progressive pollster Data for Progress asked 2,328 likely voters about eight conditions laid out by Sen. Elizabeth Warren (D-MA) and backed by many Democratic lawmakers for companies getting bailout money. Their findings: By and large, voters agree companies shouldn’t get money without strings attached.

Nearly three-quarters of voters say companies receiving bailout money should commit to no layoffs, while just 11 percent oppose that requirement, according to the Data for Progress polling. And it’s an area where, at least among voters, there is agreement across the political spectrum: 82 percent of Democrats, 61 percent of independents, and 70 percent of Republicans agree on no layoffs. 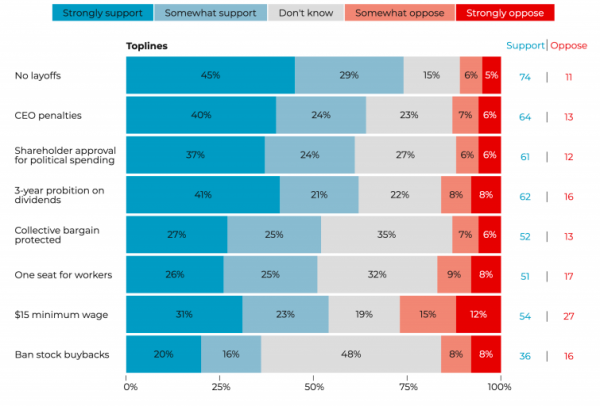 A majority of the voters surveyed on March 18 and 19 online also agree with the following conditions on bailout money:

Only one issue did not get broad-based support among voters: the condition that companies receiving bailout money would be barred from engaging in stock buybacks. But that’s not necessarily because voters don’t think that should happen — it’s because many appear to be unfamiliar with the issue. Nearly half of voters said they weren’t sure about prohibiting stock buybacks as part of a bailout condition. Still, 36 percent of voters said they agreed with the idea while just 16 percent opposed.

It’s worth noting that even President Donald Trump appears to back the stock buyback prohibition, or at least that’s what he said at a press conference on Saturday. “I want money to be used for workers and keeping businesses open, not buybacks,” he said.

You can see Data for Progress’s full memo on its findings here.

Congress could listen to Americans on this. Will they?

Vox’s Dylan Matthews laid out what’s currently being negotiated in Congress in terms of relief for big business — $425 billion in loan guarantees, $50 billion for airlines, $8 billion for cargo air companies, and $17 billion for firms “critical to national security.” He also laid out why it’s become contentious:

We still don’t know the full scale of the economic implications of the coronavirus crisis, and we probably won’t for quite some time. In all likelihood, it will be devastating for businesses of all sizes, for investors, and for workers. In a time like this, it’s fair to want to make sure American companies can stay afloat. It’s also fair to want to make sure they’re taking care of their workers, customers, and consumers instead of lining their executives’ and shareholders’ pockets. The American public agrees.

A White House order to keep masks in the US could limit supply, companies warn

Trump could have reopened health care enrollment for coronavirus. He chose not to.