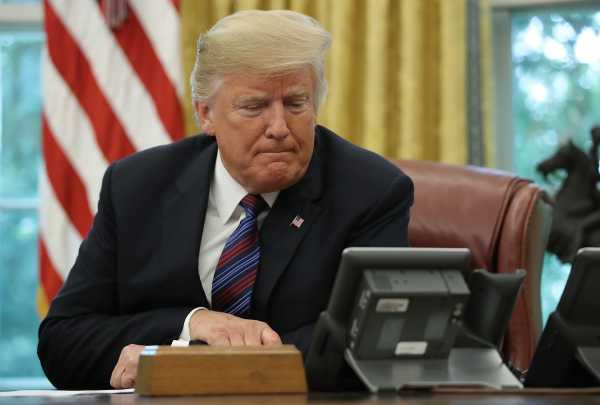 Last week was a rough one for President Donald Trump, but a new set of polls confirms that he can still count on the unwavering support of a portion of the electorate.

Here’s what happened: Michael Cohen, Trump’s former lawyer, pleaded guilty to eight federal charges, and Paul Manafort, his former campaign chairman, was found guilty of eight crimes of his own. Cohen implicated the president in his crimes, and the president seemed to confess to his involvement in campaign finance violations on national television.

Despite the string of negative headlines, Trump’s popularity isn’t tanking with the American public. He’s not a very popular president in the first place, but the increased focus on the criminals around him didn’t make things worse, according to a pair of polls conducted jointly by the Wall Street Journal and NBC News.

All that news, and Trump’s approval rating dipped by 2 percentage points — within the margin of error, meaning it might not have moved at all.

But if it holds across other polls, a 2-point drop “would be a reasonably big shift,” FiveThirtyEight’s Nate Silver pointed out on Twitter. In other words, it’s possible that last week’s legal drama made a difference, but it’s not a given.

Peter Hart, a Democratic pollster who worked on the polls, told the Wall Street Journal that leaning on the Manafort and Cohen convictions “represent[s] a fool’s gold opportunity rather than a silver bullet solution” for the Democratic strategy in 2018.

“We’ve had this enormous series of events, and these numbers don’t change very much,” Republican pollster Bill McInturff told WSJ.

Beyond the Cohen and Manafort developments, last week Rep. Duncan Hunter, one of Trump’s first endorsers, was indicted for misusing federal campaign funds; and the president’s top economic adviser, Larry Kudlow, was caught palling around with a white nationalist.

That’s not to say voters think Trump is in the clear. Per NBC News:

And a majority of voters say Trump hasn’t been honest about Russian interference in the 2016 election.

Trump’s base is always on board with him

The polls have shown time and time again that the voters who really like Trump are pretty likely to stick by him no matter what he does. After his meeting with Russian President Vladimir Putin in Helsinki in July, Republicans overwhelmingly approved of his performance, even though it was widely panned by most other groups.

In that context, it makes sense that even criminal convictions of two of Trump’s former close allies — and Trump himself possibly being implicated in a crime — might not have done much to shake voters. The people who most fervently support him seem like they’re going to do so despite almost anything that happens — even if those in his inner circle break the law, or, potentially, he does.