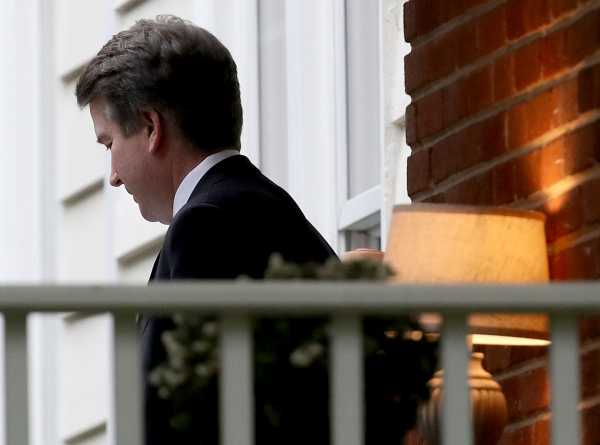 Donald Trump’s instinct was right. A loyal FBI is worth a purge or two.

Case in point: Brett Kavanaugh is an associate justice on the Supreme Court.

FBI Director Christopher Wray, installed after Trump fired James Comey for refusing to limit the scope of the Russia investigation, said and did nothing as the White House ordered limits on a reopened background check of Kavanaugh.

The bureau agreed not to interview Kavanaugh or Christine Blasey Ford, who accused him of sexually assaulting her, or to respond to many people stepping forward with new information. They agreed not to follow up on possible lies Kavanaugh is accused of telling in his Senate testimony. And they made other concessions unknown to the public or even Democrats on the Senate Judiciary Committee.

According to the New York Times’s reporting, White House lawyer Don McGahn made sure relevant questions went deliberately unexplored because, he believed, “a wide-ranging inquiry like some Democrats were demanding — and Mr. Trump was suggesting — would be potentially disastrous for Judge Kavanaugh’s chances of confirmation to the Supreme Court.”

At the end of the one-week deadline, the FBI handed a document to Congress that didn’t seek to clarify seriously the veracity of the accusations against Kavanaugh, but its existence gave Republicans the cover they wanted to back him anyway.

The upshot is that the independent FBI established after Watergate and whose existence everyone reaffirmed during Wray’s confirmation process is now dead. Other senior FBI leaders have already been purged, and Trump’s shameful treatment of Peter Strzok, Bruce Ohr, and others has made it clear that he has no compunction about ordering further purges.

Kavanaugh’s appointment to the Supreme Court dealt a serious blow to the integrity of the Court — and the implications of how he got there go well beyond to the entire legal order.

The White House got away with stamping on an FBI investigation. Think of it as a dry run for a coming shutdown of special counsel Robert Mueller’s investigation.

It’s easy to forget, but the existence of a Russia inquiry isn’t a natural fact of American life. Barack Obama was president when it began, and then in the critical winter of 2016 to 2017, many Republicans, particularly foreign policy hawks, were uneasy with Trump and saw an investigation as a useful way to force him into policy orthodoxy. When Comey was fired, enough of that unease was still in place that many Republicans pushed for a special counsel to carry things forward.

Trump, however, has clearly signaled his desire to clean house and fire Mueller after the midterms. And the Kavanaugh fight has shown us (and, more importantly, shown Trump) that congressional Republicans are coming around to the idea that independence of federal law enforcement is overrated. His White House, meanwhile, though hardly a well-oiled machine, has demonstrated its ability to work the levers of power and get things done.

If the GOP is able to hold its majority or (as looks more likely, given current polling) pick up a seat or two, a firm Trumpist majority will be in place ready to govern with the principle that what’s good for Trump is good for the Republican Party, and subverting the rule of law is definitely good for Trump.

Trump is facing other charges

Two signs of how far we’ve already fallen from the rule of law have played out over the past couple of months.

Trump’s personal attorney Michael Cohen pleaded guilty to a range of crimes and specifically implicated Trump in some of them. And an exhaustive New York Times investigation produced strong documentary evidence that Trump committed tax fraud back in the 1990s.

But in both cases, nothing has happened.

The United States attorneys in New York who prosecuted Cohen do not appear to be following up with a prosecution of the president. (Nor is it at all clear that they could do this even if they wanted to.) And it’s simply taken for granted that the IRS, under the control of a Trump-appointed commissioner, will ignore the federal tax fraud issue — so far, they haven’t so much as commented.

There is no prospect of a congressional investigation into either of these matters, nor any clamor from the Republican majority for the appointment of a special counsel. We’ve simply reached an equilibrium in which it’s understood that the president no longer needs to follow the law, and so the news cycle will move on rapidly from evidence of his lawbreaking.

If Democrats do well in the midterms, they may be able to exert Congress’s constitutional prerogatives to partially halt that trend. But if they do poorly, the trend will only accelerate.

All this has happened before

Back in the less partisan days of 1969, then-President Richard Nixon ordered the FBI to wiretap five journalists whose reporting the administration didn’t like. A couple of years later, he had the IRS audit the tax returns of the editor of Newsday in retaliation for a series of investigative reports into one of Nixon’s cronies.

The Watergate investigation revealed these and related abuses of power and led to the creation of the modern norms of treating many sensitive executive agencies as in effect independent of the White House.

But those norms are just norms — the president can fire executive branch appointees and replace them with ones he likes better as long as the Senate is willing to go along. Meaning that in the face of a determined White House, the leaders of these agencies will either surrender their independence or surrender their jobs.

And while Trump lost the popular vote, the Senate GOP caucus represents a minority of Americans, and even thought Kavanaugh is unpopular, Republicans brushed those concerns aside.

If they’re able to successfully wield federal investigations as a weapon in 2019-’20 the way Nixon did, they may be able to entrench themselves in power despite unpopularity. At a minimum, they’ll be able to shield themselves and their allies from legal scrutiny.

A remarkable fact about the rule of law in the United States of America is that even though US attorneys are appointed by the president, their offices sometimes undertake investigations that are bad for the president politically. Early in Barack Obama’s term of office, federal investigators in Illinois charged Gov. Rod Blagojevich in a manner that was not only inconvenient to national Democrats but arguably cost them a blue Senate seat from 2011 to 2016. Later in Obama’s term, a federal case against Sen. Robert Menendez (D-NJ) wound up nearly costing Democrats a different blue Senate seat.

And there was nothing particularly unusual about this. One doesn’t even exactly need to believe that Obama or his predecessors were too pure of heart to interfere with federal investigations for partisan reasons — they were simply cautious.

To be seen as meddling in a federal investigation in that way would have been a huge scandal had it been uncovered, and traditionally, presidents have tried to avoid generating huge scandals.

But Trump, by shutting down an FBI investigation into Kavanaugh for transparently partisan purposes and earlier firing Comey and Deputy Director Andrew McCabe on thin pretexts sends a powerful message: He doesn’t care.

Everyone working in every federal agency in America knows that fear of being caught isn’t going to stop Trump from engaging in political meddling. If you look into malfeasance committed by a business he owns — or that his son-in-law owns, or one of his friends or donors or other associates — and he gets mad about it, he might stomp on you and not worry too much about the possibility of getting caught. And the mere fact that this is so obvious means in most cases you don’t really need to stomp on anyone.

The White House counsel has no legal authority I can see to give orders to the FBI, yet there’s no indication that McGahn had to threaten or intimidate anyone to get his way. He simply made it clear that the administration’s political strategy was “do a cursory investigation because we don’t care whether Kavanaugh is guilty” rather than “do a thorough investigation because we’re confident it will exonerate him.”

This same attitude toward the rule of law can and likely will filter down into lower levels of the federal government. And it will operate not just on high-profile cases, but in subtle ways — to ensure that enforcement is used selectively to punish Trump’s enemies, or to ignore enforcement selectively to reward his friends.

Normal leaders tread cautiously in this domain for fear of exposure, scandal, and political backlash. But Trump tends to operate on the principle that audacity will be rewarded and new scandals will always come along to crowd out old ones. It’s a scary approach to political leadership, and so far, it’s working pretty well.