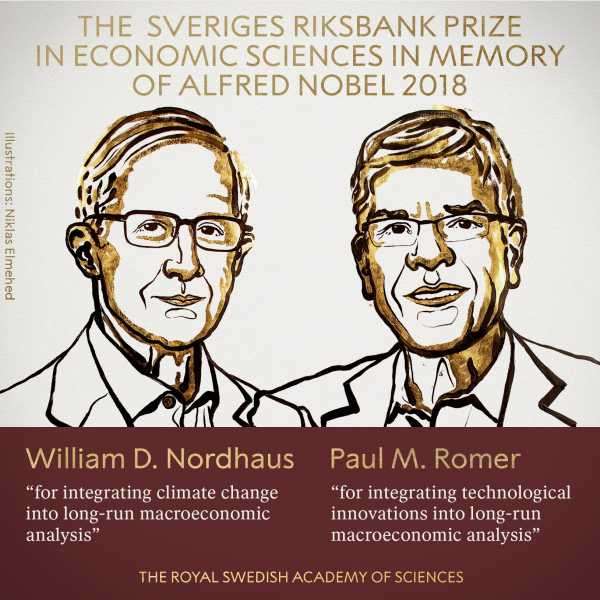 On the heels of a bracing report from the top scientific body on global warming, two economists — one focusing on climate change and the other on technology — were awarded the 2018 Nobel Memorial Prize in Economic Sciences on Monday.

William Nordhaus, 77, a professor of economics at Yale University, and Paul Romer, 62, an economics professor at the Stern School of Business at New York University, were recognized by the Nobel committee for their work on “long-run macroeconomic analysis.” This is the study of how economies like those of entire countries fare over the scale of decades, if not centuries.

Romer found that across these time scales, you can see that small upticks in growth accumulate, adding up to massive, transformative changes in people’s lives. Much of this growth comes from new technologies that allow people to do more work with less labor and fewer resources. But how do you get those innovations in the first place?

It turns out there are specific conditions in economic markets that allow new ideas to emerge and take root, thereby leading to new approaches and inventions that grow economies. Romer modeled how economic forces change how willing a company or a government is to invest in a novel approach.

This idea was the root of endogenous growth theory, which emphasizes that you can get more new, useful ideas by investing more in finding them, like funding research and development initiatives. These innovations in turn boost the rest of the economy.

The theory suggests that larger populations have more people working in the knowledge sector thereby increasing economic growth. It also shows that protecting ideas via copyrights and patents is a critical incentive, even though protectionism often causes problems in other sectors of the economy.

The Nobel announcement came shortly after the United Nations’ Intergovernmental Panel on Climate Change issued a sprawling new report finding that 3.6 degrees Fahrenheit, or 2 degrees Celsius of global warming, above preindustrial temperatures would be far worse for humanity than warming by 2.7°F, or 1.5°C, and that we may only have 12 years to get on track.

That report reminds us that economic growth — and our reliance on fossil fuels — has also had severe consequences for the planet, which then ricochets back into, and harms, economies. Burning coal, oil, and gas has helped humanity make remarkable progress in improving infrastructure, transportation, and health, but it also emits gases that trap heat. The rising temperatures in turn have fueled multi-billion dollar disasters alongside other economic drains like reduced crop yields and nutrition.

Nordhaus created an integrated assessment model to demonstrate this interplay between economies, social impact, and the environment. It’s a unique tool that couples the physics of climate change to economic principles, allowing users to quantify their impacts on the planet as well as the planet’s impacts on them.

Integrated assessment models are the foundation of the social cost of carbon, a key metric governments now use to evaluate which strategies for fighting climate change are worthwhile. It’s also used to come up with a value for a carbon tax, a policy instrument to fight climate change.

During the press conference announcing the prize, Romer connected his work on technology to Nordhaus’s research on climate change, highlighting how investment in innovation can have a compounding benefit for the environment.

“It is entirely possible for humans to produce less carbon,” he said. “Once we start to try to reduce emissions, we’ll be surprised that it wasn’t as hard as we anticipated.”

But Nordhaus lamented that governments have yet to grapple with the scale of the climate challenge. “The policies are lagging very, very far — miles, miles, miles — behind the science and what needs to be done,” he said.

Further reading on the 2018 Nobel Prizes: