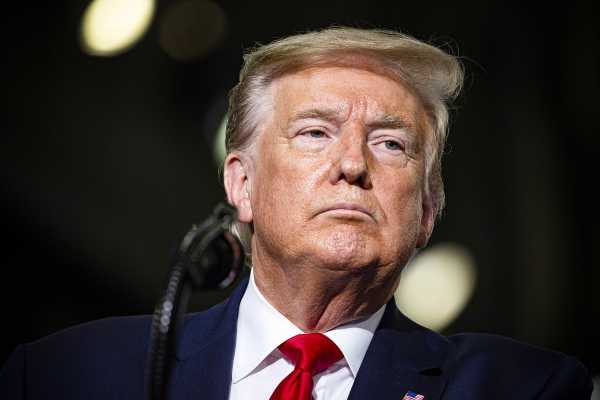 While the nation continues to protest the police killing of George Floyd, an unarmed black man, in Minneapolis and in cities around the country, President Donald Trump took to Twitter Sunday afternoon to stoke old grievances: Instead of a message of unity or leadership, or attempting to deescalate the protests, he instead lashed out at the media, antifa, anarchists, and Democratic mayors and governors.

The president praised the Minnesota National Guard, who he said “shut down quickly” “anarchists and ANTIFA” at protests in Minneapolis. It was a clear attempt to paint the uprisings in multiple cities as acts of violence by anti-fascists and anarchists, whom he has repeatedly denounced throughout his presidency.

By many accounts, however, it was police, not protesters or antifa who provoked violence in Minneapolis and other cities. While Trump praised them, a video of National Guard personnel in the Whittier neighborhood of Minneapolis firing paint canisters after yelling “light them up” at citizens standing on their own front porch went viral on Twitter overnight Saturday.

He also sent a warning to other “Democrat run Cities and States” that they may face similar militarized action if they can’t quickly quell the Floyd protests, while encouraging mayors and governors to deploy the National Guard.

Later in the afternoon, Trump tweeted a call for “Law & Order” in Philadelphia, saying there was looting in the city and asking the state’s Democratic governor, Tom Wolf, to call in the National Guard. He also tried to tie the looting to Democrats more generally, and presumptive Democratic nominee Joe Biden specifically.

But it was Trump’s promise to designate antifa as a terrorist organization that garnered the most attention Sunday. Antifa is not a formal organization, but a loose collective of militant and leftist groups united under opposition to fascism.

It’s unclear whether Trump can actually declare anyone with a certain political belief a terrorist, though it’s likely the president doesn’t have the authority to do so, according to experts. If he gets his way, he’ll have succeeded in declaring a group of oppositional protesters as terrorists. That could have terrifying implications for criminalizing speech and the right to protest in general.

And during a weekend in which dozens of journalists were arrested or assaulted while covering the protests, Trump once again attacked the media in a tweet Sunday, accusing them of fomenting “hatred and anarchy.” He also called the media “fake news” and “bad people.”

The message was not one of unity, but instead falling back on old grievances, at a time when the nation needs leadership most.

Trump only has one playbook: sowing division

Sunday’s tweets are classic Trump, stoking culture war tensions and catering to his base — including those supportive of aggressive law enforcement tactics.

In July 2017, Trump told a crowd of police officers at Suffolk County Community College on Long Island not to worry about injuring suspects while making arrests. “When you guys put somebody in the car and you’re protecting their head, you know, the way you put their hand over?” Trump said, mimicking the motion of an officer shielding a suspect’s head to keep it from bumping the frame of a car door.

“Like, don’t hit their head, and they just killed somebody — don’t hit their head,” Trump said. “I said, you can take the hand away, okay?” Trump’s comments at the time were rebuked by the Suffolk County Police Department, as well as departments in Houston, and Gainesville, Florida.

While Trump’s messaging over Floyd’s death was initially muddled, he also hasn’t been afraid to use it for divisiveness. On Friday, he warned people against looting, reciting an infamous segregationist-era phrase, “When the looting starts, the shooting starts.”

He has also repeatedly praised the police response to the protests, a group that makes up one of his core political constituencies.

The International Union of Police Associations endorsed Trump’s reelection campaign last September. “Every top Democrat currently running for this office has vilified the police and made criminals out to be victims. They seem to take any union’s support for granted. Many of them still refer to the tragedy in Ferguson as a murder, despite the conclusions of every investigative inquiry to the contrary,” IUPA president Sam Cabral said in a statement at the time, referring to the police killing of unarmed black teenager Michael Brown in Ferguson, Missouri. “While his candor ruffles the feathers of the left, I find it honest and refreshing. He stands with America’s law enforcement officer and we will continue to stand with him.”

It was an endorsement the Trump campaign welcomed wholeheartedly. “Too often today, law enforcement officers are treated as scapegoats, when in fact their jobs are incredibly difficult, dangerous, and depend on life-or-death, split-second decision-making,” said campaign manager Brad Parscale in a statement at the time.

In fact, the president of the Minneapolis Police Union, Lt. Bob Kroll, spoke at a Trump rally last October, during which he praised Trump for ending the “handcuffing and oppression” of the police under President Obama.

On Tuesday, Kroll warned against moving too quickly to bring the officers responsible for Floyd’s death to justice. “Now is not the time to rush to judgment and immediately condemn our officers,” he said.

But the police, including the Minneapolis cops Kroll represents, are tasked with protecting the public, including the media and antifa members. If they’ve taken Trump’s message to heart, that could be dangerous, especially for George Floyd protesters.

This was also not the first time Trump has threatened antifa. In August last year, ahead of a right-wing protest in Portland, Oregon, that also turned violent, the president threatened to designate antifa as a terrorist organization, just as he did again Sunday afternoon.

“Major consideration is being given to naming ANTIFA an ‘ORGANIZATION OF TERROR,’” Trump tweeted back then. “Portland is being watched very closely. Hopefully the Mayor will be able to properly do his job!”

All of this division ultimately may help Trump politically because it burnishes his brand. He plays to some people’s desire for “law and order,” which has historically been a strong issue for Republicans and white Americans in particular. His tweets reorient the media narrative, signaling to his base that they should be angry and scared of protesters and that the police are there to stop the “chaos.” In doing so, Trump has found his political wedge to distract the public from the issue — in this case, excessive police violence — being protested.