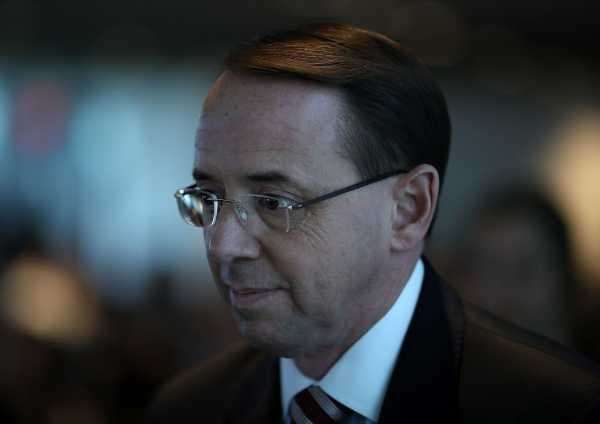 According to a new report from CNN’s Pamela Brown, Evan Perez and Laura Jarrett, when Rosenstein visited the White House in December, Trump asked Rosenstein where the Russia investigation was heading and whether the deputy attorney general was on his “team.” The CNN team cites “sources familiar with the meeting.”

The comments would be part of a pattern for Trump of demanding to know which side law enforcement officials are on, even when they’re supposed to be nonpartisan. He reportedly requested then-FBI Director James Comey’s “loyalty,” questioned the “loyalty” of Attorney General Jeff Sessions after his recusal from the Russia probe, and inquired about whom then-Deputy FBI Director Andrew McCabe voted for in 2016.

The Rosenstein comments, which reportedly happened just last month, make clear Trump hasn’t changed his stripes in this regard — he wants his top law enforcement officials to be personally loyal to him, and he can’t bring himself to simply let the Russia probe go forward without his interference.

The comments were reported as Trump’s lawyers are in discussions with Mueller’s team about a potential presidential interview, and while an effort from the White House to discredit Mueller’s probe — and perhaps even lay the groundwork for firing Rosenstein — is heating up.

The “Nunes memo,” a controversial document written by Republican House Intelligence Committee staffers and likely to be released soon, reportedly criticizes Rosenstein. According to the New York Times, the memo says that shortly after being sworn in as deputy attorney general last spring, Rosenstein re-approved an existing wiretap on former Trump campaign adviser Carter Page.

Though much focus has been on the question of whether President Trump will fire special counsel Robert Mueller, the fact is that Rosenstein is the only person who has the authority to do that. It is also Rosenstein who will determine what should be done with whatever Mueller finds. So if Trump manages to replace Rosenstein with a crony, he could dramatically undermine the Russia probe.

The other remarkable detail in the CNN piece is that, per one of their sources, Trump himself “suggested questions to members of Congress that they could ask Rosenstein” at a hearing — including about why Rosenstein appointed Mueller in the first place. This would mean the president was suggesting antagonistic questions to be aimed at one of his own appointees.