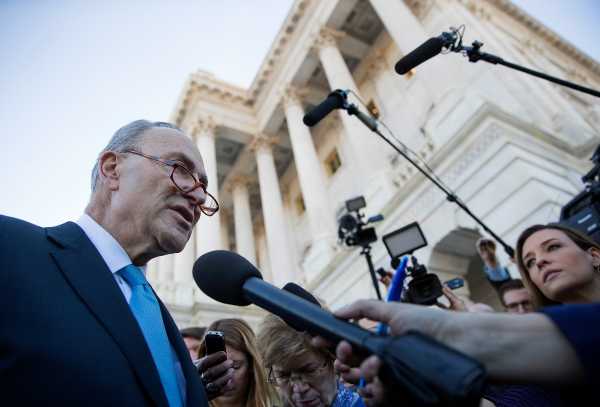 Now that the Republican Nunes memo is out, Democrats are pushing for President Donald Trump to release their memo as well. That document was written by Rep. Adam Schiff (D-CA) and is a rebuttal of Devin Nunes’s (R-CA) attacks on the FBI. (The Nunes memo alleges abuse of power by the FBI during its investigation into the Trump campaign’s potential Russia ties.)

On Sunday, Senate Minority Leader Chuck Schumer (D-NY) urged the president to approve the release of Schiff’s memo as a counterweight to Nunes’s. Schumer said it is imperative that the American people see Schiff’s memo so they can “make their own judgments” as soon as possible.

“I believe it is a matter of fundamental fairness that the American people be allowed to see both sides of the argument and make their own judgment,” Schumer wrote in a letter to the president released on Sunday. He said that a refusal to release the Democratic memo would “confirm the American people’s worst fears” that the Nunes memo “was only intended to undermine special counsel Bob Mueller’s investigation.” Earlier in the week, on Friday, Schiff told reporters the Trump administration “would be hard-pressed to try to suppress the [Democrat’s counter memo], particularly since they claim they’re releasing the GOP memo in the interest of transparency.”

Democrats on the House Intelligence Committee, of which Nunes is chair and Schiff is the ranking member, are expected to push for a committee vote on Monday to release their memo, according to CNN. If approved, the matter would be sent to President Trump, who would have five days to object to its release. Last week, Republicans blocked the Democratic memo, but they have since said they would vote to release it.

A quick refresher on the dueling memos

The White House declassified a version of the memo prepared by Nunes this week over vigorous objections by the FBI, which has warned it omits key information that could impact its veracity. The memo alleges the FBI was biased in its probe of Page, the former Trump aide. It also confirms that it was Trump foreign policy aide George Papadopoulos who began the Trump-Russia investigation when he told an Australian diplomat that Russia had political dirt on Hillary Clinton.

Schiff, who prepared the Democratic memo, has been among the Nunes memo’s biggest critics. He said at a Monday press conference that it was an attempt to “politicize the intelligence process” in service of a “deeply flawed person in the Oval Office.”

According to Schiff, his document is a 10-page rebuttal of many of Nunes’s claims. He reportedly defends the FBI’s application for a surveillance warrant on former Trump aide Carter Page and says that there was no deception surrounding the now-infamous Steele dossier. CNN reports that the Democratic memo also attacks Nunes’s political motivations. In a Sunday appearance on ABC’s This Week with George Stephanopoulos, Schiff slammed the Nunes memo as a “political hit job” on the FBI and said the president’s decision to release the memo could potentially be part of an obstruction of justice case.

Senator Dick Durbin (D-IL) told CNN’s Jake Tapper on State of the Union on Sunday that Republicans’ refusal to allow the Democratic response to their memo to come out is yet another example of a party that is “just bound and determined to continue to find ways to absolve this president of any responsibility.”

Trump said the Nunes memo “totally vindicates” him. Even Republicans say it doesn’t.

President Trump on Saturday said in a tweet that the Nunes memo “totally vindicates” him in the drama around the Russia investigation. In an appearance on Fox News’ Watters’ World with Jesse Watters on Saturday, the president’s son, Donald Trump Jr., said the memo’s release was “a little bit of sweet revenge” for him and his family. Their contention — and one that many Republicans believe — is that the memo proves the Russia investigation was politically motivated.

The GOP also appears to believe that the Nunes memo could permanently damage special counsel Robert Mueller’s ongoing investigation into Russian meddling in the 2016 election. There is also speculation Trump might use the memo to justify firing Deputy Attorney General Rod Rosenstein and, ultimately, Mueller. (Rosenstein is the figure with the actual authority to fire Mueller.)

That the Nunes memo somehow vindicates Trump, however, is not the case. “Of course it does not,” Durbin told CNN’s Tapper.

As the Washington Post’s Elise Viebeck and Shane Harris noted, four Republican members of the House Intelligence Committee on Sunday dissented from Trump’s view that corruption has poisoned the Russia investigation in different televised interviews.

Republican Rep. Trey Gowdy (R-SC), who this week announced he is retiring from Congress, told CBS’s Margaret Brennan on Face the Nation on Sunday that the memo doesn’t have an impact on the Russia probe at all. “Not to me, it doesn’t,” he said. Rep. Will Hurd (R-TX) told ABC’s Stephanopoulos that he doesn’t agree with the president’s assertion that the memo vindicates him. Rep. Chris Stewart (R-UT) told Fox’s Chris Wallace on Fox News Sunday that the Russia probe and the memo’s release are “very separate” issues. “I think it would be a mistake for anyone to suggest the special counsel should not continue his work,” he said. Rep. Brad Wenstrup (R-OH) said on CNN that the memo and the Russia investigation are a “separate issue.”

Former CIA Director and Defense Secretary Leon Panetta told CBS News’ Jeff Pegues on Friday that the Nunes memo’s release is going to do some “very serious damage” and that the president’s distrust of the Justice Department and the FBI could create a “constitutional crisis.” He added, “There’s a breakdown in the fundamental trust that is important to the institutions of our democracy.”

Former CIA Director John Brennan said in an interview with NBC’s Chuck Todd on Meet the Press that Nunes “abused” his power on the intelligence committee. “That Devin Nunes and Republicans denied the ability of the minority, the Democrat members of that committee, to put out its report is just appalling.”