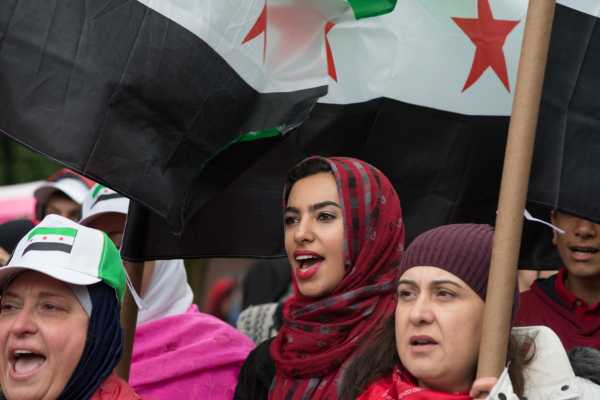 The Trump administration considers the war in Syria such a dire humanitarian crisis that it’s doing something unusual: It’s not forcing Syrians who’ve been temporarily allowed to stay in the US for the past few years to return.

But even an unusually lenient action on immigration from Trump would still be unusually harsh for any other president.

On Wednesday night, the administration announced that it’s extending its designation of Temporary Protected Status for Syria — allowing Syrians who signed up in 2016 for temporary work permits and protection from deportation to renew their protections for another 18 months, with further extensions possible beyond that. That’s reassuring for the 7,000 or so Syrians who’ve sought protection under TPS, many of whom have been here since President Barack Obama first designated the country for protection in 2012 due to its horrifying civil war.

But the administration isn’t opening a new window for TPS. Syrians who came to the US after August 1, 2016, will be forced to leave after their current visas expire — or remain in the US as unauthorized immigrants under an administration that has promised to arrest them wherever found.

Numerically, there probably aren’t a lot of Syrians in the US who are being denied the ability to stay. And the administration’s extension of TPS for current recipients — after rumors circulated that it was going to tell them to leave — shows it recognizes some international obligation to protect people whose countries are in humanitarian crisis. But by deciding not to expand TPS to recent arrivals, the Trump administration is showing, once again, that it feels the obligation doesn’t run terribly deep.

Temporary Protected Status (TPS) exists so that the US government doesn’t force people to return to countries where their lives would be in danger — usually due to natural disasters or war. It’s supposed to allow people from a given country who are in the US on temporary visas, or who are unauthorized immigrants, to live in the US until their home countries have recovered enough to take them back.

The Trump administration doesn’t believe in the global refugee crisis

The Trump administration has made it clear that it thinks too many immigrants from too many countries are being allowed to stay thanks to Temporary Protected Status. It has stressed that “temporary means temporary” (as current White House Chief of Staff John Kelly used to say when he was secretary of homeland security).

The administration recently ended TPS for Haiti by claiming it has recovered from a 2010 earthquake. It ended TPS for El Salvador by claiming it has recovered from a 2001 hurricane. The administration’s actions mean that hundreds of thousands of immigrants will lose their protections over the course of the next year and a half — with the rationale that the incident that originally made the country too unsafe to return to has ended, and the country has moved on.

But you can’t really argue that Syria has recovered from its 2011 civil war. And the Trump administration isn’t trying to.

The Trump administration is extending Temporary Protected Status for Syrians — i.e., allowing the Syrians who already have it to reapply for another 18 months of protection from deportation and work permits (the longest time the law allows for an extension).

And while the Trump administration definitely didn’t say it would allow them to renew again 18 months from now, it didn’t tell them to start making plans to leave the country at the end of that time — which is what it’s done to TPS holders from Haiti, El Salvador, and others.

What the administration isn’t doing is redesignating Syria for Temporary Protected Status — something Obama did (after initially granting TPS to Syrians in 2012) in 2013, 2015, and 2016.

Technically, what that means is that the Trump administration believes the conditions that existed in 2016 continue to be a problem, but isn’t making a new determination of a perilous situation. They’re declining to say that someone who left the country in, say, April 2017 — when reports that the Syrian government was using chemical weapons on civilians led Trump to authorize attacks on a Syrian airfield — would be unable to safely return.

Practically, that means that Syrians who entered the US after August 1, 2016, are out of luck. If they currently have a temporary visa, they’ll be expected to return after that visa expires; if they’ve been living in the US as unauthorized immigrants, they won’t get a chance to come out of the shadows. (Syrians who have been in the US since before that date but who didn’t apply for TPS in 2016 may be able to get TPS now, if they can show that they had a good reason not to apply at the time — for example, they were on a temporary visa that’s now set to expire.)

Syrians who stay in the US without papers probably aren’t going to get deported back to Syria; logistically and diplomatically, it’s extremely hard to deport people into a war zone. They’ll just join millions of other immigrants — those from other countries who are set to lose TPS; the 690,000 immigrants losing protection from deportation over the next two years under the Deferred Action for Childhood Arrivals program; the millions of unauthorized immigrants deemed low priorities for deportation under Obama but pointedly stripped of those assurances by Trump — in a state of anxious precarity.

The Trump administration can’t deport all or even most of them, but that doesn’t give them the ability to work legally or live safely, and it doesn’t protect them from arrest or immigration detention.

The Trump administration doesn’t believe in the global refugee crisis

It’s hard to know exactly how many Syrians are in the US who won’t be able to apply to stay. The number probably isn’t terribly large; in fiscal year 2016, the last year data is available, only a little over a thousand Syrian citizens entered the US on temporary visas (and most such people leave when their visas expire).

But the security threats that the administration claims justify its stinginess with refugees — the fear of a “Trojan horse” — aren’t relevant for people who are already in the US (especially when they’ve gone through all the screening to get a visa), and they certainly aren’t relevant to deciding whether or not Syrians in the US should be allowed to apply for temporary protection.

The heart of the matter is that the Trump administration, philosophically, does not believe that there is such a thing as a “global refugee crisis.” It doesn’t believe that the fact that millions of people are displaced, and that displacement is becoming a long-term or permanent condition for many of them, creates any kind of intrinsic obligation to other countries.

Its goal in Syria is to make it possible for the millions of refugees to return. It recognizes that it’s too soon to ask that of the people who have already used TPS to build a new life in the United States. But it isn’t eager to do anything that would officially expand the number of people displaced by the conflict — even if in practice, the people denied the ability to stay in the US may not really have anywhere else to go.