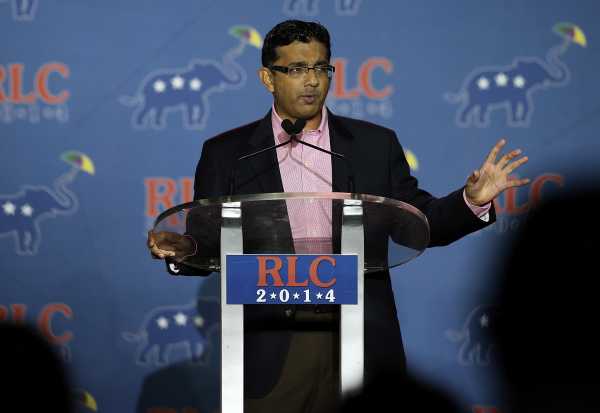 President Donald Trump has announced he will pardon conservative writer and filmmaker Dinesh D’Souza. D’Souza pleaded guilty to violating federal campaign finance laws in 2014 and was sentenced to five years of probation.

“Will be giving a Full Pardon to Dinesh D’Souza today,” Trump tweeted on Thursday morning. “He was treated very unfairly by our government!”

D’Souza’s charges stemmed from a 2012 incident where he used “straw donors” — illegally using another person’s money to make campaign contributions — to a New York Republican candidate for US Senate named Wendy Long. Long was challenging Sen. Kirsten Gillibrand at the time.

In 2014, then-US Attorney Preet Bharara prosecuted D’Souza on charges of making unlawful contributions to a US Senate campaign in the names of others. D’Souza was convicted and sentenced to five years of probation, eight months of which he served in a “community confinement center” in California.

D’Souza is a conservative provocateur who is known for using racist language and openly embracing conspiracy theories. He’s best known for his writing and documentaries, including 2016: Obama’s America, and America: Imagine the World Without Her. According to his Twitter page, D’Souza is currently working on another film that he’s releasing ahead of the midterms.

Vox’s Dylan Matthews has a good primer on who D’Souza is and how he got to be so influential on the American right. As Matthews writes:

This is just the latest controversial pardon for Trump; the president has granted presidential pardons to such figures as former Vice President Dick Cheney’s chief of staff Scooter Libby and former Arizona Sheriff Joe Arpaio.