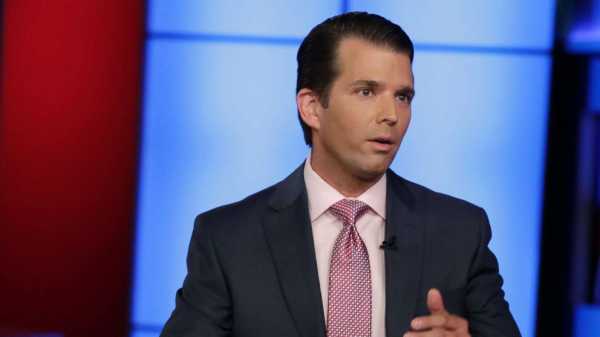 “You see the Democratic senators [saying] ‘This is McCarthyism.’ I’m like what? You have a guy screaming, ‘Russia, Russia, Russia’ with no evidence,” Donald Trump Jr. said during an interview with Fox News Channel’s Jesse Watters Saturday night. “All this shade for 18 months, screaming about McCarthyism. I mean the irony is ridiculous at this point.”

McCarthyism refers to the campaign against alleged communists in the U.S. government during the early 1950s carried out by Sen. Joseph McCarthy.

And the use of Cold War-era references and terminology continued, with Trump Jr. describing Democrats as “left of commie,” a derogatory term for a communist.

“The problem is rather than being reasonable and coming to the table, they forced themselves further, and further and further left,” Trump Jr. said during his “Watters’ World” interview. “I mean, they are left of commie right now, and that’s a real problem for them and I don’t think that’s where America was [during the 2016 election.]”

As for the controversial GOP memo released Friday alleging surveillance at the Department of Justice, Trump Jr. said the memo’s release serves as “sweet justice” for his family.

“There is a little bit of sweet revenge in it for me and certainly probably the family in a sense that if they wouldn’t have done this, this stuff would be going on,” he said. “This would be going on at the highest levels of government. They’d be continuing doing it to my father, trying to undermine his actions.”