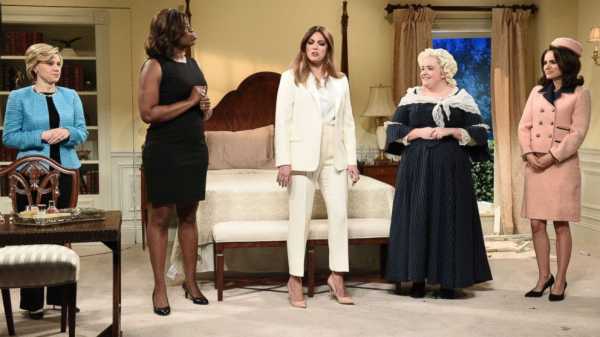 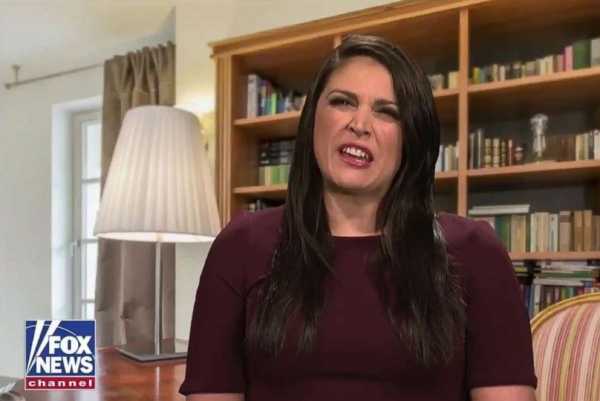 During the sketch, the first lady is also visited by other former first ladies — who imparted words of wisdom to a stressed-out Mrs. Trump — including Michelle Obama (Leslie Jones), Hillary Clinton (Kate McKinnon) and Martha Washington (Aidy Bryant).

“Come on, Melania, practice your happy face,” Strong’s Melania told herself before pouting into the mirror. “Oh, I don’t belong as first lady. I wish I could talk to someone who’s been through this whole mess before.” 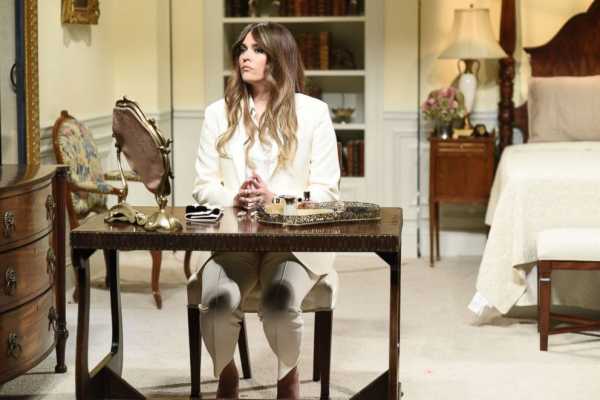 Portman’s Kennedy then appeared from a cloud of smoke: “Hello, Melania, it is me, Jackie Kennedy,” she said. “I have come to you in your hour of need, because I know how trying being first lady can be. All first ladies have a platform. Yours is bullying, mine was little hats.”

McKinnon’s Clinton also appeared, and told Strong’s first lady, “Melania, I feel your pain, but you married him. And like America you had a choice, so don’t choose to eat 7-11 sushi and then come to me saying, ‘Something’s wrong!'”

Leslie Jones’s Michelle Obama appeared, and said, “Look, Barack and I have a perfect relationship. It’s like The Notebook, but black and rich.”

When McKinnon’s Clinton said that those words aren’t helpful, Jones’ Obama responded, “Whatever, my arms rule, I love vegetables and I can be president whenever I want.” 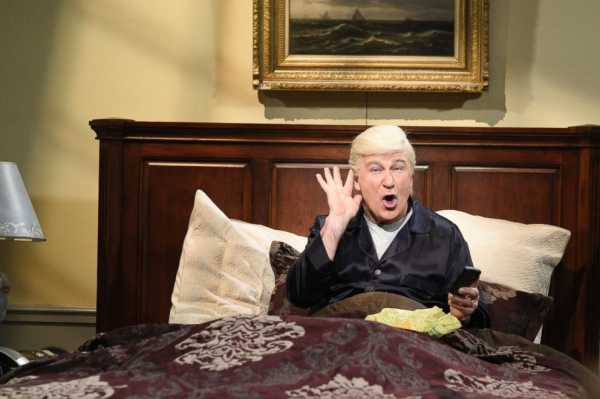 The cold open spoofed “Fox & Friends,” whose hosts received a telephone call from Baldwin’s Trump, who called into the show from bed while tweeting and eating McDonald’s Egg McMuffins.

“Oh, from who?” asked “SNL” cast member Alex Moffat’s Steve Doocy, one of the show’s co-hosts.

“From you guys,” Baldwin’s Trump shoots back.

In a nod to the controversial FBI memo, Baldwin’s Trump said, “This memo might be the best memo since the Declaration of Independence — I haven’t read either of them,” Baldwin’s Trump says of the infamous FBI memo.”

The hosts then interview Strong’s Hope Hicks via satellite, who says, of working in the White House, “There are no real jobs here, you know? Every day feels like when a group of strangers work together to push a beached whale back into the sea.”