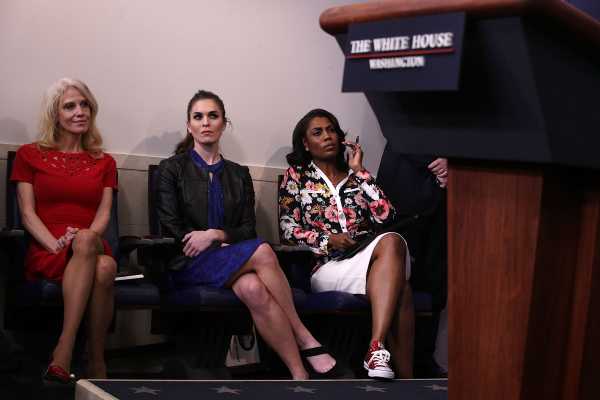 Conway, senior counselor to the president, struggled to name anyone who met those criteria in an appearance on ABC’s This Week with Jonathan Karl. Omarosa Manigault-Newman, who has been in the press recently promoting her new book, was abruptly fired from the White House in December. Now that she’s gone, Karl asked, who is the most prominent, high-level adviser to the president on the West Wing staff who is black? Conway struggled to answer.

She first pointed to Housing and Urban Development Secretary Ben Carson, who Karl pointed out isn’t on White House staff. She then arrived at Ja’Ron Smith, special assistant to the president for domestic policy. Karl pointed out he was not in the West Wing, though he has an office in the Executive Office of the President, Conway said.

“What does that say to not have a single senior adviser in the West Wing who’s African American?” Karl asked.

“I didn’t say that there wasn’t, but hold on,” Conway said. “There are plenty of people…if you’re going by that and not by the actions of the president, which you probably should, then you should look at the fact that we have a number of different minorities, and the fact is that this president is doing well for all Americans.”

Later in the program, former White House legislative affairs director Marc Short pointed to other White House staffers who are black, including Mary Elizabeth Taylor, who handles presidential nominations at the White House and was just announced to be an assistant secretary of state for legislative affairs. He also pointed to Smith, whose office he said is in the East Wing, and Daris Meeks, a former aide to Vice President Mike Pence who exited earlier this year.

Short conceded, however, that Manigault-Newman had a very top job. While at the White House, she earned a