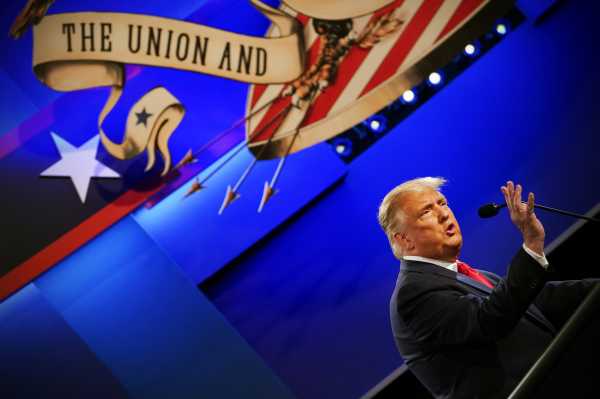 Donald Trump would like you to believe that he has done more for the Black community in America than anyone except for Abraham Lincoln — but, to clarify, he is not actually Abraham Lincoln.

During the final presidential debate in Nashville, Tennessee, on Thursday, the president apparently got tripped up by a joke made by his Democratic opponent, Joe Biden. In a section discussing race in America and how Black families have to give “the talk” to their children about interactions with the police, President Trump started off with what is often his typical defense. He pointed to Biden’s role in the 1994 crime bill, touted his own record on race, and claimed he’s the biggest gift to Black people in America since Lincoln.

“Nobody has done more for the black community than Donald Trump. And if you look, with the exception of Abraham Lincoln,” he said, before adding, “I’m the least racist person in this room.”

When Biden was asked to respond, he began with an obvious joke and a hit: “Abraham Lincoln here is one of the most racist presidents we’ve had in modern history.”

Except Trump didn’t get the joke. After Biden finished his response, Trump said, “You made a reference to ‘Abraham Lincoln here.’ Where did that come in?”

No, Trump hasn’t been the best president for Black America since Lincoln

In case you are confused: Donald Trump is not Abraham Lincoln, the 16th president of the United States who died on April 15, 1865.

There are a couple of things going on here. For one thing, Trump is, indeed, not the best thing to happen to Black America since Lincoln. Per my colleague at Vox, Fabiola Cineas:

But beyond that, the president is weird at jokes. He can be and often is funny on the campaign trail — in a way that his critics, so emphatic about catching him in some sort of pickle, sometimes fail to understand. But in this case, it was Trump who wasn’t in on the joke. He often plays the role of the insult comic — Crooked Hillary, Sleepy Joe, Crazy Bernie — and on Thursday, he missed the subtle wink aimed at him. And so, he was left explaining that he is aware he is not a person who has been dead for 150 years.