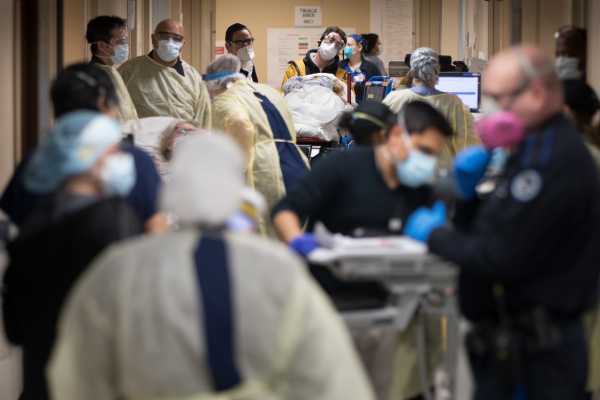 The country’s Covid-19 problem wasn’t a New York problem in March, nor was it a Texas problem in July, nor is it a Wisconsin problem right now. It was and is an American problem.

Throughout the pandemic, President Donald Trump has sought to cast the virus as a state-by-state issue. (Frankly, a lot of people have.) It’s New York and California that are the real mess, he says. They’re the ones ravaged by the coronavirus, they’re the ones whose leaders are to blame for their health and economic problems. The red states, well, when they need help, he will provide it of course, but he also insists they’re doing much better.

During the final presidential debate on Thursday, the president returned to that line of attack. According to him, New York City is now a “ghost town” that’s “dying,” wrapped in plexiglass. And he said the same goes for other places with Democratic leadership, like California, Pennsylvania, and North Carolina: “Democrats, Democrats all, they’re shut down so tight and they’re dying.”

Joe Biden offered a contrast to Trump’s approach, one that brings home an obvious but important point: “I don’t look at this in terms of the way he does, blue states and red states, they’re all in the United States.”

Right now, many of the states experiencing spikes in cases are in the upper Midwest, such as Wisconsin and South Dakota. Both states were “red states” in 2016, but it doesn’t matter. “They’re all Americans,” Biden said.

There’s no denying that the US has failed to get the coronavirus pandemic under control. On Thursday, the country reported a single-day record of confirmed coronavirus cases: 77,640, surpassing the previous high from July. More than 220,000 Americans have died from the disease, and roughly 1,000 people continue to lose their lives to it every day.

“We’re learning to live with it,” President Trump, who himself contracted the virus recently and now claims he is immune from it, said during the debate.

Biden’s retort: “People are learning to die with it.”

In many ways, it feels as though the federal government has given up on trying to combat both the pandemic and saving the economy. As the virus spikes in different states, governors and local officials have largely been left to their own devices to combat it, as the president sends tweets assigning blame or calling for reopening. Currently, the federal government’s strategy seems more like a waiting game for a vaccine, which Trump says is much closer to being available than experts have said.

Meanwhile, millions of people are out of a job, and much of the support they received through the CARES Act stimulus has dried up. The deal-making president has been unable to get a deal for more assistance, and many Republicans have cast the economic problems caused by the coronavirus as a blue-state issue — one they have no interest in addressing.

You can’t fix the economy without fixing the pandemic — a point Trump often misses, but one Biden has stressed

But when Republicans refuse to provide assistance to state and local governments that are in desperate need of help, they are actually denying both red states and blue states aid — and creating a situation where budget shortfalls will weigh on the economy for years. And as much as the president would like to pretend that reopening is the answer, it isn’t: With a deadly virus still spreading, people aren’t exactly eager to get back out there and consume. You can’t fix the economy without fixing the pandemic — a point Trump often misses, but one Biden has stressed.

“I’m going to shut down the virus, not the country,” Biden said on Thursday.

New York is America. So is South Dakota. And we should all care about both.

During the debate, Trump zeroed in on New York City, his home his entire life until he landed in the White House. He’s been attacking the city and state throughout the pandemic. Earlier this month, he declared New York had “gone to hell.” He has consistently blamed Gov. Andrew Cuomo and Mayor Bill de Blasio for the state and city’s coronavirus woes. Thursday was no different.

“Take a look at New York and what’s happened to my wonderful city. For so many years, I loved it. It was vibrant. It’s dying. Everyone’s leaving New York,” he said.

New York City was hit hard early on in the pandemic in a way that was painful and heartbreaking. But the city and state have gone to great lengths to get the virus under control and, at least thus far, have been successful. Nobody is perfect — and plenty of New Yorkers have a lot of criticism for their governor and their mayor. But New York has flattened the curve, with leaders now focusing on “hot spots” in the city and state where cases are spiking to try to keep the outbreaks under control.

On the economic front, yes, it’s difficult, and there’s no denying businesses are being hit hard. But the city is resilient. As mentioned, plenty of cities and states need help right now — help the president could make happen.

During the pandemic, we’ve seen a lot of finger-pointing. If only this state had acted faster, this mayor. And early on in the outbreak, New York was deemed the “bad place.” Now, the city’s doing better, but it’s awful to see the disease spread in other places. Back in April, my family in Wisconsin was calling to check in on me as the disease spread here in Brooklyn. Now, it’s me calling worried about them.

The core of treating coronavirus like a state problem is a desire to treat it like an “other” problem. Covid-19 is something that happens to other people, people who must have done something bad. Or, in the president’s case, it’s something that is someone else’s fault.

There are plenty of reasons America failed on the pandemic, but it’s hard not to wonder if this isn’t one of them. Maybe if the country had treated this like a United States problem and not a New York problem early on, things could have been different.