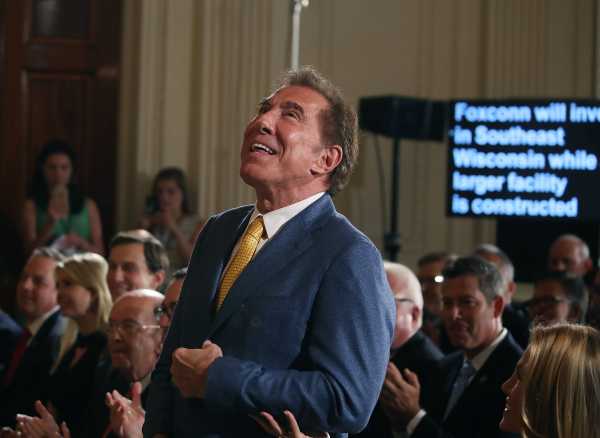 When allegations of sexual harassment were first made against Hollywood producer (and prolific Democratic fundraiser) Harvey Weinstein last fall, the reaction from the GOP came fast and furious. Top Republican officials immediately demanded that the DNC return Weinstein’s donations.

But the GOP is singing a very different tune after allegations of sexual harassment and assault, first reported by the Wall Street Journal, against Steve Wynn, a casino magnate and the finance chair of the RNC.

Tuesday, Wynn has stepped down as as chairman and chief executive of his company, Wynn Resorts. The GOP had already accepted Wynn’s resignation as finance chair.

Still, even after Wynn left his company, the GOP isn’t looking to return his donations anytime soon. “He should be allowed due process,” McDaniel said on Fox on January 30, and on Wednesday, the RNC said it hasn’t changed its mind, waiting for a “board investigation” to play out.

The board of Wynn’s company was investigating the allegations against him. But Wynn stepped down before the investigation was complete — so it’s not clear what final verdict, if any, might be rendered.

Other Republican organizations returning Wynn’s donations and canceling events at Wynn-owned properties — without the “due process” McDaniel appears to be demanding. From the Republican Governors Association to Reps. Greg Gianforte and Karen Handel, Republicans across the country have returned hundreds of thousands of donations made by Wynn or are making donations to charity in the amount they received.

Wynn has donated more than $1 million to the Republican Party over the past 40 years, including $729,217 to Donald Trump’s inauguration. In a statement in January, DNC deputy communications director Sabrina Singh repeated McDaniel’s words regarding Weinstein’s donations back to her: “In the exact words of RNC Chairwoman Ronna McDaniel, ‘If you stand for treating women well and you stand for the respect of women, you shouldn’t take money from somebody who treated women with the absolute highest level of disrespect.’”