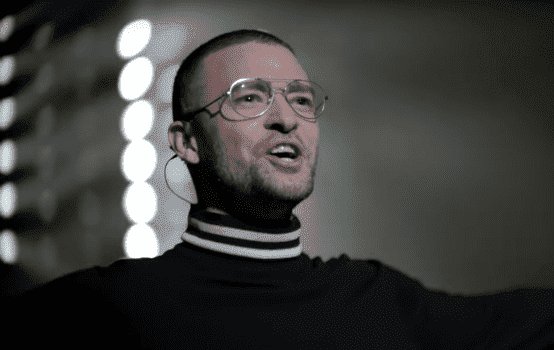 Pop culture hero Justin Timberlake released his new album “Man in the Woods” last Friday, and quickly followed it up with Sunday’s rather underwhelming Super Bowl halftime show. While Timberlake tries—and sadly often fails—throughout the one-hour-and-six-minute album to show his Tennessee roots and prove that he is a true “Southern man, a man of the woods” (as he proclaims at one point), the most exciting song is arguably “Filthy,” which is closest to the Timberlake fusion of R&B, dubstep, and pop that we’re all used to. Yet the accompanying video turns what seems like just another track about an arousing night with some woman turns into something very different altogether:

In the video, Timberlake plays a Steve jobs-style innovator who presents his newest creation at an Asian tech conference in the year 2028. His invention: a robot. As Timberlake retreats backstage, the robot takes over the presentation, showing off its fabulous skills. He (or it?) serves drinks, plays soccer, dances, grabs himself in the crotch, and even imitates sexual intercourse with a woman (after having had some exciting moments with her colleagues just before).

The audience becomes totally enamored with the robot after the performance of a neat trick towards the end, when it sends red lasers in all directions. Meanwhile, Timberlake, so far joyous over the success of his invention, is slowly becoming pixellated, until at last he vanishes completely. Technology has won. The real human being is gone, to great cheering from the crowd.

Thus does “Filthy” show just some of the dangers not necessarily of impending technological innovations themselves, but of the ways those innovations are promoted so adamantly by transhumanists, cryonicists, and all the other techno-progressives. Technology has become for many an end in itself, not just the means to better one’s life. While the actions performed by the robot are beautifully human—the athleticism needed to compete at professional sports, the altruism to serve others, the togetherness between a man and a woman—in the video they’re the province of a steely object while the real human being in the back loses his meaning altogether.

The world drawn out in Timberlake’s work is just another step towards a “Technopoly,” as Neil Postman calls it, meaning a society in which technology is always supreme and may not be questioned—ever. As Postman says: “We are currently surrounded by throngs of zealous Theuths, one-eyed prophets who see only what new technologies can do and are incapable of imagining what they will undo. We might call such people Technophiles. They gaze on technology as a lover does on his beloved, seeing it as without blemish and entertaining no apprehension for the future.”

No wonder the prospect of having a sexbot as a girlfriend is alluring to so many.

In our technopoly, technology has become a god for the faithful. As James Buchanan writes, Christianity in the Western world has been replaced by the state for most people. But others, especially those who (thankfully) have rebelled against the idea of an “omnipotent government,” are looking to another source for hope in this secularized age, another way to feel as though one is part of a greater project than just one’s individual life. Technology and science have filled that gap perfectly.

That this isn’t an exaggeration becomes evident when you witness the viciousness that technophiles and their close acolytes the progressives level at those who even mildly question the idea that technological progress is in all cases beneficial. Why would you want to go back to the Dark Ages? You’re just on “the wrong side of history.” Believing in technology is the only way to go. New religions solely based on technology have already been founded, such as the “Way of the Future,” which wants to “develop and promote the realization of a Godhead based on Artificial Intelligence,” and tries to “through understanding and worship of the Godhead, contribute to the betterment of society.” As G.K. Chesterton wrote of this progressive attitude: “The typical modern man…has no positive picture at all of what he is aiming at, but only a vague (and erroneous) sensation of progress.”

That is not to say that the proper reaction to technophiles is to start “Livin’ Off the Land” again (as one Timberlake song is named), and flee from the modern world Henry David Thoreau-style (as alluring as that might be). The proper reaction is to neither revere technology unthinkingly nor reject it entirely (which would be hypocritical anyway, since we all use it day in and day out). Past technologies have undoubtedly led to human betterment on a scale previously unimaginable, while those that come will of course bring huge additional benefits, something we need to recognize.

We also need to recognize, however, that, as Postman writes, “every technology is both a burden and a blessing; not either-or, but this-and-that.” Instead of hailing technology without giving it a second thought and proclaiming progress as our new religion, we should be careful in how we use these innovations and (perhaps more importantly) how we look at them. Techno-realism should be the motto: an optimistic eye towards technology, but not a blind faith in it; an embrace of its benefits, but a recognition of their limits. Only then can technological progress actually mean progress. If we don’t realize that, we may lose ourselves on the way—just ask JT.

Kai Weiss is an International Relations student and works for the Austrian Economics Center and Hayek Institute, two libertarian think tanks based in Vienna, Austria.