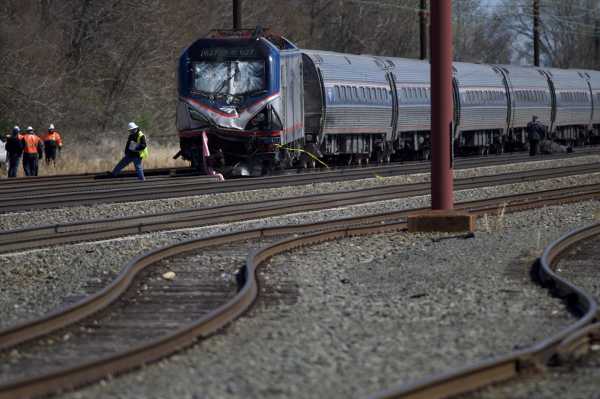 After more than a year of waiting, President Donald Trump’s eagerly awaited plan to fulfill his campaign pledge for a $1 trillion infrastructure spending boost has finally arrived in the form of a White House background briefing detailed by Julie Hirschfeld Davis and Jim Tankersley.

It doesn’t feature $1 trillion in new federal spending, promising instead $200 billion. And it doesn’t say where that money will come from or what it should be spent on, leaving such pesky details to Congress. To account for the discrepancy, the program is now said to generate fully $1.5 trillion in total new infrastructure spending by leveraging $1.3 trillion in additional state, local, and private sector spending, though “officials would not detail … how the proposal would effectively leverage at least $6.50 in additional infrastructure spending for every dollar spent by the federal government, a ratio many infrastructure experts consider far-fetched.”

What are we even talking about here?

On the campaign trail, Trump tended to talk about a desire to see a major boost in federal infrastructure spending and often tossed around the number $1 trillion. This idea has polled well, in broad strokes, for years and it meshed well with the notion that Trump was offering some kind of “new” more “populist” take on economic policy than standard GOP fare.

His actual official campaign plan, however, rather vaguely called for an American Energy and Infrastructure Act that “leverages public-private partnerships, and private investments through tax incentives, to spur $1 trillion in infrastructure investment over ten years.” In other words, his advisers were envisioning a kind of hazily defined corporate tax cut to subsidize investment in for-profit infrastructure ventures.

By May 2017, that had changed in his official presidential budget request to an ask for $200 billion in new federal spending that aimed to spur $1 trillion in total infrastructure investment through unspecified means.

Democrats, meanwhile, jumped out of the gate in early 2017 with a plan to increase infrastructure investment by $1 trillion by spending $1 trillion on infrastructure. The Democratic plan was fairly light on details but did break down the broad categories it envisioned spending money on with specific dollar amounts for those categories.

Trump’s team, meanwhile, spent months plugging away on the “spend $200 billion but get $1 trillion” plan. And while they haven’t managed to answer any of the questions about how that would work, they realized that as long as the plan makes no sense, you might as well make an even bigger claim about it and start saying you will generate $1.5 trillion in new spending.

So where does this $200 billion come from?

The White House isn’t saying, preferring to leave it up to Congress.

They do say that it should be financed through offsetting spending cuts rather than higher budget deficits, a principle they did not adopt when enacting a $1.5 trillion tax cut late last year.

They don’t have a specific explanation for this.

It’s common for the federal government to offer states money on a matching basis. So you might offer to have the federal government carry half the cost of school renovations if school districts themselves are willing to pay the other half. That way you ensure that local officials are proposing projects that actually have some value to local stakeholders rather than merely spending other people’s money. But the 6.5:1 leverage ratio implied here is very high, lacks precedent in recent federal programs, and the White House does not appear to have a clear account of how or why it will work.

Broadly speaking, it’s difficult to see how state and local governments could come up with the $1.3 trillion that Trump is anticipating. Unlike the federal government, these entities generally need to balance their budgets and thus have less fiscal capacity than Uncle Sam.

What does the money get spent on?

This, too, is being left up to Congress.

In his State of the Union Address, Trump spoke of a desire to “build gleaming new roads, bridges, highways, railways, and waterways all across our land” which sounds like bad news for people hoping to see investments in air traffic control, rural broadband, and municipal water systems, but honestly there’s no reason to take that statement seriously anyway. A gleaming highway would probably blind drivers and create unsafe conditions.

An optimistic, high-minded view of the situation is that the administration is simply trying to defer to Congress rather than create a polarizing situation.

A more cynical view would be that the main issue here is Trump likes to talk about the idea of a big infrastructure package, but Trump doesn’t actually run the Trump administration. Neither congressional Republicans nor the veteran GOP politicians and operatives who do run the Trump administration want to see a big federal infrastructure package. If they wanted one, they would have done a deal with Barack Obama when he was president and called over and over again for one.

What they actually want is cuts in the social safety net — cuts that Democrats aren’t going to agree to and that aren’t especially popular.

Now Trump has a thing that he can say is his plan, congressional conservatives can propose paying for it with safety net cuts that Democrats won’t agree to, and Republicans can try to pass the whole thing off as an example of gridlock or obstruction rather than reflecting the fact that conservatives don’t favor spending more money on federal infrastructure.

What was that Democratic plan again?

More precisely, the idea was to break it down like this:

The populist Trump is dead

That Democratic plan was always going nowhere but it existed as a trial balloon to test one potential theory of Trump-era governance.

Maybe Donald Trump who, after all, lacked personal or institutional ties to the Republican Party or the conservative movement, would govern as a kind of free-agent. Sure, Trump would say and do racist stuff that Democrats didn’t like. But maybe they could work with him on infrastructure and other elements of his “populist” persona.

What we’re saying today is that persona is dead, if it was ever really alive to begin with. Like his vaporware plan to reduce prescription drug costs, or his long-forgotten promise to expand health insurance coverage, Trump’s infrastructure plan is a rhetorical conceit with no relationship to the actual way he runs the federal government. Authority is vested in the hands of a handful of aides who largely defer to congressional Republicans, while the president busies himself tweeting and plotting against Robert Mueller. There is no infrastructure plan and there never will be.