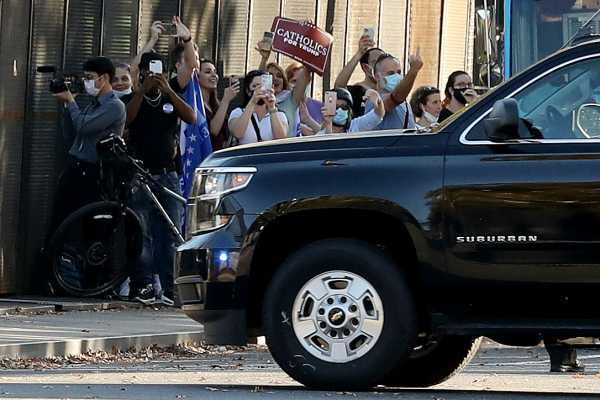 Thousands of flag-bearing and camouflaged Trump supporters — including Proud Boys and Boogaloo Boys — took to the streets of the nation’s capital on Saturday for what has been dubbed the “Million MAGA March,” a protest in support of President Donald Trump’s false claim that he was cheated out of an election win.

The president, who has yet to concede his loss to President-elect Joe Biden, even made an appearance at the march. Just after 10 am, Trump’s motorcade took a spin down Pennsylvania Avenue, with the president smiling and waving to a throng of fans — most not wearing masks — in Freedom Plaza. Trump quickly left the protest area, on his way to Trump National Golf Club in the Virginia suburbs.

Several people in the crowd spoke with the Washington Post about the president’s appearance. “He drove right past me. I saw him. He waved right past me,” one man told the Post.

The president’s visit lends legitimacy to a protest churning with conspiracy theories and falsehoods about the election. Earlier this week, Trump called the protests, which were promoted by far-right influencers all week, “heartwarming.”

Despite Trump’s and his supporters’ claims, President-elect Joe Biden legitimately won the election by a wide margin, a result which will be certified by states on December 8. The electoral college will vote on December 14, and Biden will be installed next year.

But Trump has refused to accept this, launching broadsides on Twitter, and fighting a losing legal battle to overturn the results. Much of the president’s supporter base, along with many Republican lawmakers, have thus far refused to accept Biden as the election winner.

The Million MAGA March is an offshoot of a larger “Stop the Steal” nationwide protest movement, which incorrectly claims Democrats conspired to steal the election from Republicans. The president’s supporters claim this theft was enacted in a variety of ways, from the Dominion voting machines — which are electronic and were used in many states like Michigan, Pennsylvania, and Georgia, among others — changing votes in key states, to a mishmash of false or weak claims about election observers being denied access to vote counts in swing state cities.

All of these claims have been rebutted by evidence — and some cases, by judges — but that has not stopped the president and his supporters from continuing to insist he actually won the election.

Saturday’s march was an amalgam of several different protests — a “Stop the Steal” protest, a “March for Trump” event, and the Million MAGA March — set to start at Freedom Plaza before a march to the Supreme Court at noon. Partially organized by Women for America First, which obtained a permit from the city, the protests drew a wide range of far-right groups — even right-wing conspiracy theorist Alex Jones was expected to attend.

Ahead of the protests, city residents and officials were on high alert, especially after the white nationalist-organized Unite the Right rally in Charlottesville in 2017, during which a counterprotester was killed. However, considering how many other recent high-profile white nationalist rallies — like the Straight Pride March in Boston in 2019 — fizzled out, no one was sure what exactly to expect from the march.

As of Saturday morning, clashes with counterprotesters largely didn’t materialize. One small group of women who led counterprotesters were continuously surrounded by Trump supporters, with both groups shouting and chanting at each other until the counterprotest group was able to cross a police barricade to safety.

While turnout was probably in the thousands, that didn’t stop the White House from inflating the largely peaceful protest’s numbers.

And yet the fact that so many showed up at all shows how successful Trump has been in convincing supporters that there is something amiss with the 2020 results — even if he hasn’t been able to convince the courts.