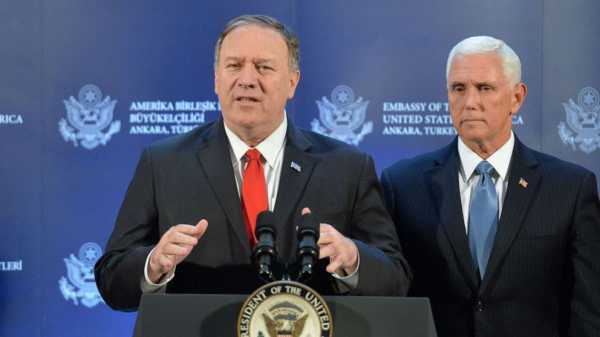 Secretary of State Mike Pompeo defended the “ceasefire” that he and Vice President Mike Pence brokered with Turkey and responded to criticism from both Kurdish fighters and Republicans on the Hill, on ABC’s “This Week.”

Add Syria as an interest to stay up to date on the latest Syria news, video, and analysis from ABC News.

The U.S. and Turkey reached the agreement on Thursday to “pause” Turkey’s military operations in northern Syria for five days to allow Kurdish forces to withdraw from a buffer zone. If the withdrawal is complete after that time, Turkey will halt its operation and the U.S. will lift sanctions on Turkish officials. U.S. officials were calling the agreement a ceasefire while Turkish officials have referred to it as a pause.

Despite the deal taking effect on Thursday, eyewitnesses reported that shelling continued through Thursday night and into Friday morning.

“We put out a joint statement which we think will really save lives. It’s worked so far,” Pompeo said on Sunday, adding that he had just received a report from his senior advisers that indicated that there is relatively little fighting still in Syria.

But since the release of a joint statement between the two NATO allies, critics from across the political spectrum have panned it as a capitulation to Turkey or a vague resolution that does not fully address the crisis now unfolding in northeastern Syria with the departure of U.S. troops.

“The Turks said they got everything they wanted,” ABC News Chief Anchor George Stephanopoulos said on Sunday.

“I was there. It sure didn’t feel that way when we were negotiating,” Pompeo said.

“It was a hard fought negotiation. It began before the vice president and I even arrived in Ankara,” he said. “We achieved the outcome that President Trump sent us to achieve.”

(MORE: What’s in Trump’s Syria ‘ceasefire’ with Turkey and what’s next: Analysis)

Following the ceasefire announcement on Thursday, there were Republicans on Capitol Hill who were cautiously optimistic.

“The administration and the president’s decision has undermined every single one of” America’s interests in Syria “and I think has done so in ways that we’re going to regret for a long time,” Rubio said on Thursday.

Pompeo responded to Rubio’s comments on Sunday, saying that the Trump administration was still “fully” committed to preventing the reemergence of the Islamic State, restraining Syrian President Bashar al-Assad’s power and eliminating Iranian influence in Syria.

“Security, stability in the Middle East has increased because of the work we’ve done,” he said. “I’m very confident that this administration’s efforts to crush ISIS will continue.”

(MORE: Life and death in Syria as US troops withdraw: ‘We don’t trust America anymore’)

“And Lindsey Graham raises the other concern as the Kurds are withdrawing from that border with Turkey, that it would lead to a military occupation that displaces hundreds of thousands,” Stephanopoulos said. “He says that’s not a safe zone, it’s ethnic cleansing. Can you assure the Kurdish people and the president’s allies in Congress that you will not be party to ethnic cleansing?”

Pompeo pointed to the joint statement that was released declaring the ceasefire.