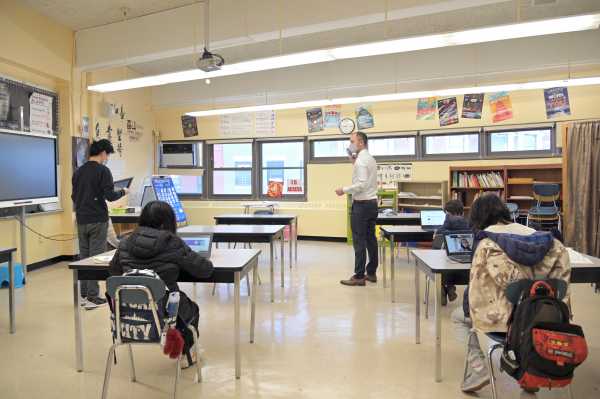 Many schools have been closed since the earliest days of the pandemic, resorting to remote learning in an effort to reduce the spread of Covid-19. Now that scientists have a better understanding of how to limit infections in schools — and with vaccine distribution ramping up throughout the country — some parents, students, and educators are calling for the days of closed schools to soon be in the rearview mirror.

But a new Pew Research poll has found that a majority of Americans — 59 percent — believe that K-12 schools that have yet to open should remain closed for now, at least until all teachers who want a vaccine get one, compared to just 40 percent who say schools should reopen as quickly as possible.

The poll of 10,121 US adults (taken from February 16 to 21) also found that 61 percent of adults believe schools should make the possibility that students may fall behind with online learning central to deciding whether to reopen.

That percentage is up 13 percent from a similar July 2020 poll taken at the height of the pandemic. In last year’s poll, respondents were more concerned with preventing the spread of the virus among students (61 percent) and teachers (60 percent). Pew found respondents far less worried about these concerns in its latest poll, with 48 percent concerned with spread among teachers and 45 percent concerned about the spread among students.

The results are somewhat contradictory; if students falling behind is a key concern, that would suggest schools ought to be opened as soon as possible, given that current data suggests online learning has slowed students’ progress. However, if vaccinating all teachers who would like to be inoculated is important, then reopening may have to be delayed, given the current availability of vaccines.

The issue of when to reopen schools is one that evokes strong emotions on either side of the debate. Parents have been left to care for their own kids while managing learning online at home over the last year, while teachers have understandably been terrified of exposing themselves and their families to a potentially deadly disease.

According to an EducationWeek report released Wednesday, at least 227 active teachers have died of Covid-19 in the US since the start of the pandemic. That teaching in person may prove fatal is a legitimate concern that has many teachers’ unions across the country now pushing for delaying school reopenings until their teachers can get the vaccine.

The Pew poll suggests that a majority of US adults are sympathetic to that position, even if it may mean putting students further behind academically.

The poll revealed differences of opinions along racial lines. Eighty percent of Black respondents said schools should wait until teachers who want it can be vaccinated; 72 percent of Asian respondents agreed, along with 69 percent of Hispanic respondents. However, only a slight majority (51 percent) of white poll takers said reopenings should be contingent on vaccination.

The numbers were even starker along partisan lines, with nearly 8 in 10 Democrats (79 percent) agreeing with waiting until teachers can be vaccinated, compared to just 34 percent of Republicans.

President Joe Biden has pushed for a quick return to full time, in-person learning since taking office late last month, with the CDC releasing new guidelines for reopening schools safely. But those guidelines are also preventing some school districts from being able to reopen.

One of the guidelines recommends that areas with high local spread of Covid-19 — a condition currently applicable to large swaths of the US — should only reopen with a fraction of the student population, or remain closed altogether.

The lack of action has left many parents frustrated, and students at risk of falling behind and suffering negative mental health outcomes. And even with an ambitious vaccination program, waiting to vaccinate all teachers will take time, as epidemiologist Benjamin Linas noted for Vox:

Balancing the health of teachers and students with the academic progress and mental health of students is no easy task. Reflecting this, public opinion appears to be uniquely nuanced on the issue. The decisions of administrators and teachers’ unions may lead to some frustration in the short term, but perhaps the best news is that the pandemic will, eventually, be over.