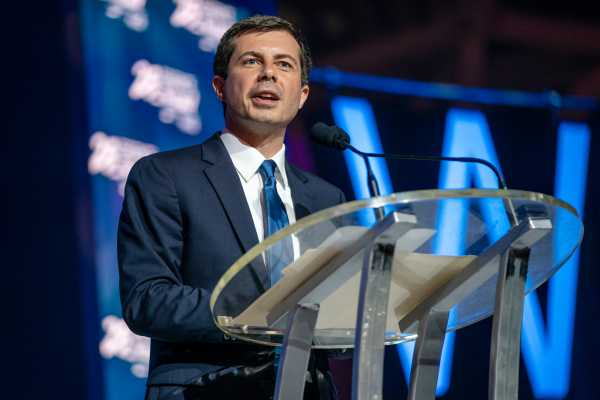 Democratic presidential candidate Pete Buttigieg introduced an ambitious new platform targeted at black voters on Thursday, calling for a broad series of political and policy reforms that would lead to a “comprehensive and intentional dismantling of racist structures and systems” in the United States.

The announcement of the plan comes as Buttigieg works to convince black voters that he deserves their support. The South Bend, Indiana, mayor has polled at zero percent among black voters in some recent national polls (through other polls in states like South Carolina show his support increasing slightly), and has also faced continued criticism of his handling of a recent police shooting in South Bend.

The 18-page platform, which Buttigieg calls his “Douglass Plan for Black America” in honor of abolitionist Frederick Douglass, aims to reduce racial inequities. To accomplish this goal, Buttigieg is proposing a variety of political reforms, as well as a series of new investments the candidate says would disproportionately help black communities.

“We have lived in the shadow of systemic racism for too long,” Buttigieg said in a statement. “The Douglass Plan will help heal our deep racial divides with bold policies that match the scale of the crisis we face today,” he added.

The Douglass Plan was first previewed in June shortly before Buttigieg appeared at the Black Economic Alliance Presidential Forum in South Carolina. The official release of the full plan arrives as the campaign tries to find its footing with black voters, who make up more than a fifth of the Democratic electorate, and account for a large share of primary voters in states like South Carolina.

The plan could help Buttigieg make inroads with a crucial bloc of voters who are expected to play a significant role in the Democratic primary. And it’s focus on measures that are largely under the control of the executive branch offers a revealing look into how Buttigieg perceives the government’s role in helping communities of color whose needs have often been overlooked or intentionally left out of federal policy.

It suggests that Buttigieg sees federal efforts to address racial inequality in the present as crucial to the success of not just black Americans, but the country as a whole.

The plan calls for a $25 billion investment in historically black colleges and universities (HBCUs) and other minority-serving institutions. Buttigieg also has proposed the Walker-Lewis Initiative, named for black entrepreneurs Madam C.J. Walker and Reginald Lewis, that would aim to triple the number of entrepreneurs from underrepresented backgrounds over 10 years. Similarly, the plan would create a fund to invest in minority-founded businesses, offer loan deferments and forgiveness programs to black college students who start businesses after graduating, and increase the amount of federal contracting funding given to small business owners from marginalized communities.

Buttigieg also calls for boosting the number of public school teachers of color, fighting racial bias in the health care system, and reducing mass incarceration at the federal and state levels by 50 percent. (This difficult goal would involve reducing arrests, decriminalizing drug possession offenses, closing prisons, and investing in social services and diversion efforts.) Other proposals include restoring the part of the Voting Rights Act gutted by the Supreme Court’s 2013 ruling in Shelby County v. Holder, abolishing the death penalty, and using federal funding to encourage police transparency.

There’s also Buttigieg’s 21st Century Homestead Act, which would “purchase abandoned properties and provide them to eligible residents in pilot cities while simultaneously investing in the revitalization of surrounding communities.”

The Douglass Plan also makes several references to historic and systemic inequities that have affected black communities still struggling with a systemic denial of wealth accumulation introduced during slavery and maintained by other policies in the generations since.

On reparations for the descendants of enslaved people, a topic that has seen increased attention in the 2020 primary, Buttigieg’s campaign says that rather than being a replacement for a reparations program, the Douglass Plan will serve as a complement. (Buttigieg, like many of his competitors, supports HR 40, a congressional proposal to study the need for reparations and what possible programs would look like.)

Buttigieg has struggled to win over black voters. The Douglass Plan could be a step forward.

While much of Buttigieg’s plan is aimed directly at assisting African Americans, it also includes larger proposals that he says will help all Americans, like raising the minimum wage, ending the use of the electoral college, and automatic voter registration.

As a result, it might be easiest to think of the Douglass Plan as a policy platform that is highly race-conscious, but is not fully race-specific.

Buttigieg’s plan arrives at a time when the candidate has faced criticism over his efforts to engage black voters and communities. Questions about the current mayor’s standing with this group have been particularly noticeable in the past month after South Bend was rocked by the June police shooting of Eric Logan, a 54-year-old black man. Local constituents argued that Buttigieg was more focused on campaigning than the needs of black residents in his city, complaints that haven’t fully receded in the weeks since.

Buttigieg says that he is committed to regaining the trust and support of not only his community, but the larger black electorate as well. And in the middle of a primary contest where several candidates are making appeals to black voters a core part of their campaigns, it is obvious that Buttigieg wants the Douglass Plan to be a step toward making his commitment clear.

How the Douglass Plan will actually play with voters, however, is not immediately apparent. While his plan is comprehensive and largely focuses on issues squarely under the control of the executive branch, Buttigieg’s relatively reserved approach to campaigning may cause him some difficulty when presenting the plan to black voters. They might compare him to other candidates (like Sens. Elizabeth Warren and Kamala Harris) who regularly discuss race and policy.