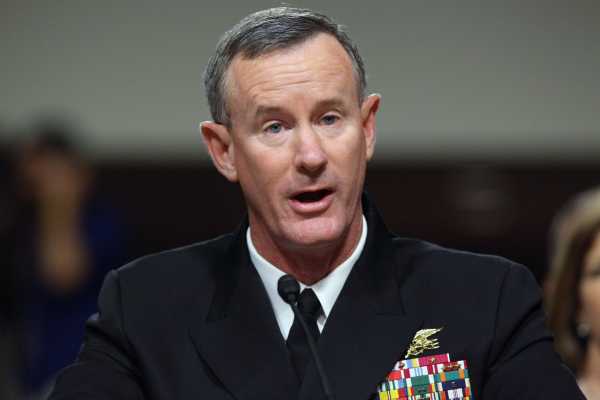 The man who led the raid that killed Osama bin Laden in 2011 has a message for President Donald Trump: Revoke my security clearance, too.

Retired Navy Admiral William H. McRaven, who led US Joint Special Operations Command from 2011 to 2014, wrote a short, but blistering op-ed for the Washington Post on Thursday afternoon, challenging the president on his decision to revoke the security clearance of former CIA Director John Brennan.

In the statement, he praised Brennan’s service to America, and his “unparalleled integrity.”

McRaven continued, writing, “I would consider it an honor if you would revoke my security clearance as well, so I can add my name to the list of men and women who have spoken up against your presidency.”

Like other Americans, McRaven said, he had hoped that Trump would “rise to the occasion” upon his election. But the president, in his eyes, had failed. “Through your actions, you have embarrassed us in the eyes of our children, humiliated us on the world stage and, worst of all, divided us as a nation,” McRaven wrote.

He concluded that Trump’s “McCarthy-era” tactics would fail to suppress criticism, and that such criticism “will continue until you become the leader we prayed you would be.”

The short, straight-to-the-point column was a stunning rebuke of Trump because of the source. McRaven, a decorated veteran with decades of distinguished military service, is not among the usual chorus of voices (or cable news talking heads) of former Barack Obama and George W. Bush officials who loudly criticize the president.

McRaven is currently the chancellor of the University of Texas system and has served both Republican and Democratic presidents. And his criticism carries weight, to some extent, because he rarely throws himself into the partisan fold.

The retired Navy admiral has, however, criticized the president before. At a University of Texas talk in February 2017, he said that Trump calling the press the “enemy of the people” was one of the “gravest threats” to democracy. But this column is a rare instance in which he’s critical in such public a setting — like the opinion pages of a newspaper the president knows and despises.

McRaven’s criticism should matter. Will it?

McRaven is responding to Trump’s decision to revoke former CIA Director Brennan’s security clearance, which White House press secretary Sarah Sanders announced Wednesday in a presidential statement during the daily press briefing. Trump, in his statement, cited Brennan’s “erratic” behavior, and “increasingly frenzied commentary” to justify his move, though it came less than 24 hours after Brennan had gone on cable news and Twitter to criticize the president.

McRaven isn’t the only former official coming off the sidelines to slam the president’s decision to revoke Brennan’s security clearance. At least 12 former intelligence officials also lambasted the president for his move to punish Brennan, Politico reports, calling it an attempt “to stifle free speech.”

“You don’t have to agree with what John Brennan says (and, again, not all of us do) to agree with his right to say it, subject to his obligation to protect classified information,” the letter read.

Former CIA directors going as far back as the Reagan administration signed on to the statement, though two officials, former CIA Director Michael Hayden and former Director of National Intelligence James Clapper are also on Trump’s security clearance hit list.

McRaven’s critique, and the bipartisan letter from officials, should force both Democrats and Republicans to take notice.

But using the system as a cudgel to punish critics or those connected to an investigation into him and his associates set a dangerous precedent — and that’s what McRaven and others are objecting to right now.

Trump has also floated the idea of removing the clearances of other top intelligence and law enforcement officials, many of whom are vocal critics of the administration. (Many others are connected to the Russia investigation.)

But the president’s defenders have mostly written off the concern that Trump’s actions against Brennan went too far. The response from Republican lawmakers has been muted. Some have spoken out in defense of the president’s decision. “I think what John Brennan has said about this country over the past several months has been disgraceful,” Sen. Cory Gardner (R-CO) told CNN Thursday.