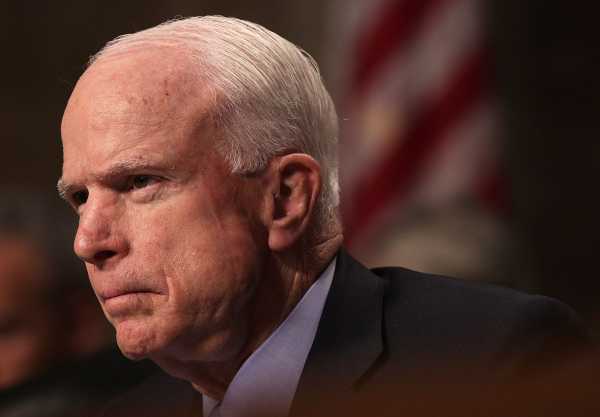 Memorial services to honor the life of late Sen. John McCain — who passed away from brain cancer over the weekend — will begin Wednesday and continue for five days in Arizona, Washington, DC, and Maryland.

McCain had reportedly been preparing for his funeral arrangements ever since his brain cancer diagnosis last fall — including a request that President Donald Trump not be invited.

According to CBS News, Trump was, in fact, asked not to attend a memorial service taking place at the National Cathedral on Saturday, though Vice President Mike Pence is expected to go. McCain had also requested that former Presidents Barack Obama and George W. Bush deliver eulogies at the Saturday service, while former Vice President Joe Biden is due to give remarks during a memorial service in Phoenix on Thursday.

Here is how the legendary late senator is being honored in different ceremonies this week.

Wednesday: lying in state in Arizona

On Wednesday, the Republican lawmaker will lie in state at the Arizona State Capitol building in Phoenix, where members of the public will be able to come in and pay their respects.

There will be a private ceremony at 10 am Pacific to commemorate McCain’s service, and the public will be able to offer their tributes beginning at 2 pm Pacific.

Online: A live stream of the Arizona viewing will be available on McCain’s website.

Thursday: Memorial service in Phoenix, with a eulogy from Joe Biden

A formal memorial service for is set for Thursday at 10 am Pacific at the North Phoenix Baptist Church. Former Vice President Joe Biden, a colleague of McCain’s in the Senate, will speak at the service, according to the Associated Press.

Members of the public are able to request tickets.

Online: A live stream of the memorial service will be available on McCain’s website.

Friday: lying in state at the Capitol

After the memorial in Arizona, McCain’s body will be transported to Washington, DC, where he will lie in state at the US Capitol. A private ceremony will take place in the Capitol Rotunda in the morning at 11 am Eastern and the area will be open to the public later in the afternoon.

Where: US Capitol, Washington, DC

A National Memorial Service for McCain is scheduled at the Washington National Cathedral. Lawmakers, friends, family, staff, and other global leaders have been invited to the private event. Former presidents Barack Obama and George W. Bush are among those expected to deliver eulogies.

Online: A live stream of the memorial service will be available on McCain’s website.

Sunday: Private memorial and burial at US Naval Academy

There will be a private memorial at the US Naval Academy followed by a burial service. McCain is expected to be buried alongside his former Naval Academy classmate and friend Adm. Chuck Larson.

Where: US Naval Academy, Annapolis, Maryland