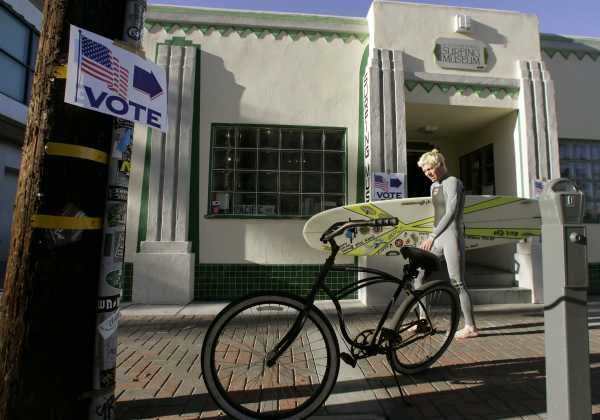 When Hillary Clinton eked out a victory in a deep-red Republican district in Orange County, California, Democrats saw an opening to flip it to blue in the 2018 midterms. All they’d need to do, after all, is unseat Vladimir Putin’s favorite Congress member,

But then things started to fall apart. In the final days before the most hotly contested race of the primary season, once-hopeful Democrats are starting to worry that they missed their chance to mobilize unified opposition because of party infighting, and they’ll pay a steep price.

“We’re likely going to get locked out in June,” a Democratic campaign aide told Vox of the CA-48 race, six days before the election. California has an unusual “top two” primary system, in which candidates from all parties run against each other and the first- and second-place finishers run in the general election, allowing for the possibility of a matchup between two Republicans in November.

On the surface, Democrats face a basic math problem. In California’s 48th District, there are four frontrunners competing for two slots in the general. Incumbent Republican Dana Rohrabacher is expected to come in first. Democrats hoped to pick up the second slot, but for months they’ve squabbled over who should be the party’s main contender. And they never coalesced around a single candidate.

Instead, there are two candidates: an ex-Republican business executive with the backing of the Democratic Congressional Campaign Committee (DCCC) and the nation’s largest progressive group, and a California Democratic Party-endorsed stem cell scientist, who has spent a lot of time denying allegations that he drunkenly punched a female student in bar fight.

The story of a party grappling with unity is a classic political tale — and the divided party often loses. As Democrats try to take back the House this fall, they’ll need to be united across the country, and specifically in California, where they need to make big gains.

Losing this one race won’t ruin Democrats’ chances of taking back the House outright, but it is a test for a party trying to win in much more Trumpian districts than this one. If they can’t win where Hillary won, where can they?

Rep. Dana Rohrabacher has been a target for Republicans and Democrats 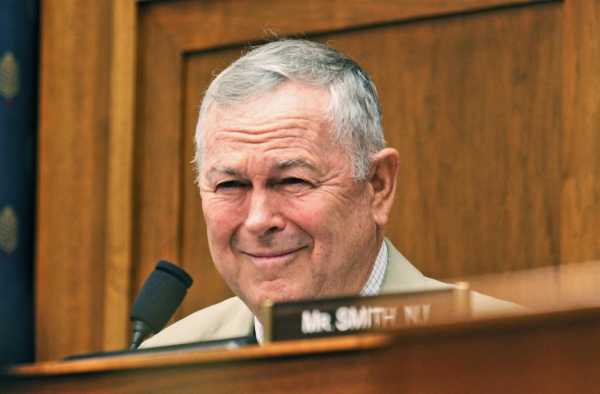 When vulnerable California Republicans Reps. Ed Royce and Darrell Issa dropped out of the midterms, rumor had it Rohrabacher would be next to call it quits. But he never did. Instead, he became one of the most vulnerable Republicans in 2018.

His district, anchored by Huntington Beach, spans about 40 miles of California’s southern coastline. It is one of the seven Republican-held districts that went for Clinton in 2016. Cook’s Political Report rates it as a toss-up. It’s the kind of wealthy, majority-white, suburban, and not-so-Trumpy district Democrats think they can win over.

And Rohrabacher, the former Ronald Reagan speechwriter, has represented California’s 48th District since 1988. He sits on the House Committees on Science, Space, and Technology, and chairs the Foreign Affairs subcommittee on Europe, Eurasia, and emerging threats. Ironically, he doesn’t believe in the scientific consensus around climate change and is one of the most pro-Russia voices in the Republican Party. So much so that he brags about the time he drunkenly arm-wrestled Putin in the 1990s to decide who won the Cold War.

His positions on Russia have hit a particular flashpoint during Trump’s presidency and the adjacent investigations into Russia’s conduct during the 2016 election. The New York Times reported that the Kremlin even had a code name for Rohrabacher as a possible intelligence source.

While he had no official role in the Trump campaign, Rohrabacher met with WikiLeaks’ Julian Assange in August 2016, and special counsel Robert Mueller is reportedly interested in his relationship with Michael Flynn, Trump’s shady former national security adviser. All of this has made Rohrabacher a prime candidate to challenge.

After all, Baugh and Rohrabacher have deep family ties: In the 1990s, Rohrabacher’s wife pleaded guilty to two felony charges for recruiting and installing a decoy Democratic candidate to split the vote and get Baugh elected to the California Assembly.

Baugh, who served in the California Assembly from 1995 to 2000, briefly as the minority chair, went on to chair the Orange County Republican Party.

In an environment where Trump is unpopular but registered Republicans outnumber Democrats 41 percent to 30 percent, Baugh is neck and neck with Democrats Harley Rouda and Hans Keirstead in a heated race to claim the No. 2 spot on the November ballot. According to early May polling released by Rouda’s campaign, all three are hovering around 13 percent of the vote, while Rohrabacher leads with 30 percent. 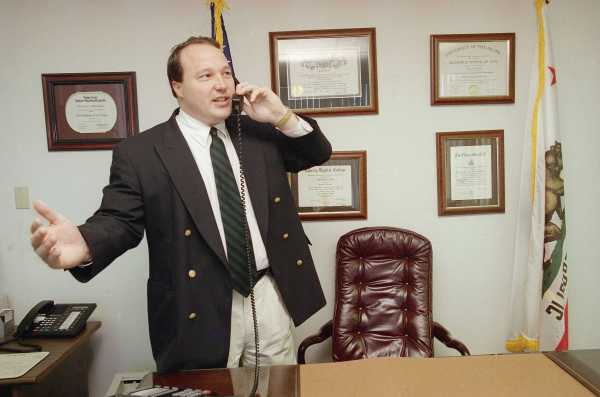 There’s no question that Baugh’s decision to enter the race was a complicating factor for Democrats.

“Scott Baugh being in this race presents a serious threat that Democrats could get locked out of this race,” Keirstead told Vox. “If he was not in, the surety of a Democrat challenging Rohrabacher would be there, but now it is in threat.”

But Democrats have already been dealing with a mess of their own making: The party is split between two candidates.

One is Rouda, a millionaire real estate investor and former Republican who has adopted the now-standard progressive Medicare-for-all, free college platform. The second is Keirstead, a stem cell researcher and neuroscientist, who fancies himself as a more “practical” progressive Democrat.

“We are not having an airy-fairy, ‘wave your wand’ notion of getting billions or hundreds of billions of dollars new into the system by fighting against defense or fighting against the tax code,” he said of his plan to make the health care system more efficient. “We are actually getting it from the very system where the money is: health care.”

Rouda, for what it’s worth, told Vox he thinks Congress should fix Obamacare first, too, before pursuing a public option. On paper, there is not much daylight between his and Keirstead’s platforms. Both have outraised Rohrabacher’s $1.5 million war chest, with Rouda outpacing Keirstead by $300,000 with $1.9 million. Rouda’s campaign did not respond to Vox’s interview request.

But there’s some party infighting playing out. Last year, the DCCC encouraged Keirstead to get into the race. But in May, the national campaign arm threw its support behind Rouda, adding him to the infamous Red to Blue list and partnering with Rouda on a TV ad buy. By election day, the DCCC will have poured nearly $1.7 million into the race supporting Rouda and bashing Baugh.

Keirstead’s campaign has been mired in allegations about his conduct at the University of California Irvine, where he was accused of sleeping with graduate students and getting into a drunken bar fight in 2009. A university investigation found those allegations to be unsubstantiated, and it later came to light that the whistleblower had a personal feud with Keirstead over patenting rights to some of Keirstead’s innovations. Rouda, however, continues to push on the issue. 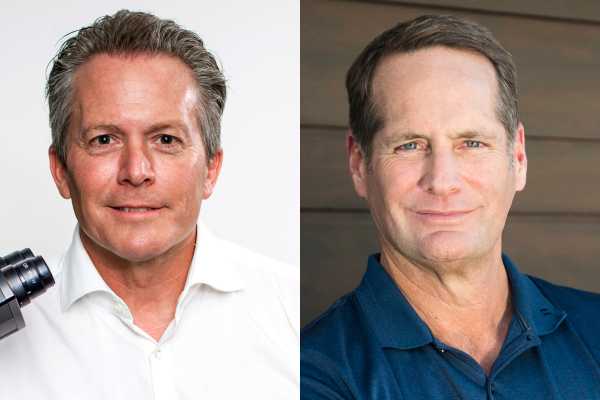 “Keirstead never should have been running because of that background,” Rouda told Vox, saying the Democratic Party should have vetted him more thoroughly. Those allegations, in part, turned California’s congressional delegation behind Rouda as well.

First to admit the allegations are rightfully a vulnerability, Keirstead says that’s not the only thing that’s pushed the DCCC away from his campaign.

“My conversation with the DCCC was: Put money into the race and get this UCI thing over with,” Keirstead said. “They were constantly telling me to put more money in the campaign.”

It’s made for an uncomfortable situation because the California Democratic Party and the Orange County Democratic Party endorsed Keirstead in February through their convention process. If you ask Keirstead, their endorsement was “a deeply informed endorsement,” unlike the DCCC’s. “The DCCC hasn’t exactly been known by their great choices,” he said.

But ask the local Indivisible chapter and you get a very different interpretation.

“The California Democratic Party has their process — people have used the word corrupt, I don’t like that word, it’s inappropriate — but I feel like it’s outdated,” said McCall, head of the county’s Indivisible chapter, adding that the party threw its support to one candidate too early. “Hans Keirstead was endorsed by the California Democratic Party before he had a platform on his website.”

Indivisible has also lent its support Rouda, who, despite being a former John Kasich donor, they feel champions progressive politics in the district. Rouda said he left the Republican party 21 years ago, but Federal Election Commission filings show he’s given $9,200 to Republican congressional candidates between 1993 and 2007 — and nothing to Democrats in that time. Kasich, he said, is a close family friend.

To complicate matters further, there will be eight Democrats on the ballot on Tuesday. Nearly half of them have unofficially dropped out of the race, but not in time to get their names removed from the list. And without a clear Democratic frontrunner, anything could happen Tuesday.

“Just quote me that please go vote,” McCall said. “We’re in so much trouble”

Democrats could be missing out on a major opportunity

However you look at it, Democrats’ path to a House majority in 2018 involves California. There are 14 Republican-held districts in California, and Democrats are targeting 10 of them. A fast-growing minority population (overall, California’s Latino population is larger than its white population) has made areas that were once Republican strongholds — places in the Los Angeles suburbs in Orange County, the Central Valley, outside Sacramento, and outside San Diego — all potential ground for Democratic victories. There are seven districts currently held by Republicans in California that Trump lost in 2016.

Rohrabacher’s district is undoubtedly one of them. But California’s primary system and the infighting in both parties have created a uniquely difficult situation for Democrats.

On one hand, Democrats’ troubles in this race are unique to the state. There are going to be 16 names on a ballot, eight of them Democrat, and almost half of whom are individuals who have unofficially dropped out of the running. The state operates on a system that Rouda says has simply “gone bad,” hurting both parties.

It’s a Catch-22. The worse Rohrabacher does, the better his Republican challenger Baugh does. The better Baugh does, the fewer votes there are for Democrats Rouda and Keirstead to split. Not to mention the handful of other Democrats who will undoubtedly pick up some votes.

Of course, Democrats don’t need to flip every California Republican seat to take back the House majority in 2018. But losing the chance to even run a candidate in a district Clinton won would be a major missed opportunity.