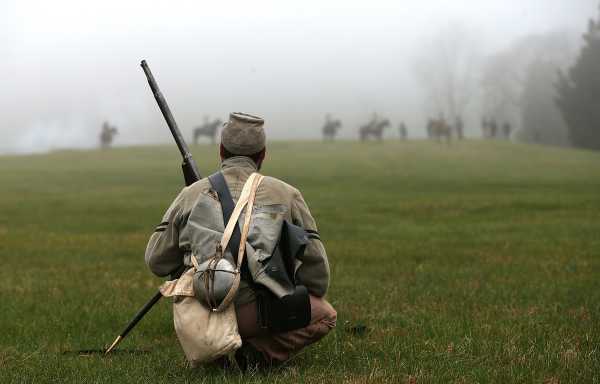 Last Sunday, the New Yorker, which is practically synonymous with careful, sober-minded reportage in the United States, tweeted out this:

The linked piece, originally written last year by Robin Wright, quoted no political scientists or experts on civil wars. Instead, it mostly consulted historians who study one 158-year-old American case.

Experts on civil wars who have considered a larger sample of conflicts could’ve told Wright that civil wars in rich democracies, excluding secessionist terror campaigns like ETA’s in Spain or the IRA’s in the UK, basically never happen. The New Yorker piece itself relies on an informal survey of an unnamed group of “experts” conducted over burgers by Foreign Policy magazine’s Thomas Ricks. His lunch buddies estimated the odds of civil war at 35 percent, which was good enough for Twitter.com/NewYorker.

If anything, the 1860s throwback content was a welcome change from the steady procession of hyper-viral Hitler analogies bouncing around, both on Twitter and from historians and public intellectuals who should know better (Yale’s Timothy Snyder chief among them).

Conservatives have gotten in on the analogizing too. As early as November 2016, idiosyncratic social conservative Rod Dreher was drawing pointed analogies to the Weimar era, implying that 1920s Germany’s relatively lax attitudes toward homosexuality helped clear the way for fascism, by contributing to a “crisis of masculinity.”

Political observers have, in short, become addicted to live-action role-playing (LARPing), to borrow a term gamers have adopted for when tabletop role-playing games like Dungeons & Dragons or Call of Cthulhu turn into more physically active events with costumes and swords and the like.

The Civil War and Weimar analogizers are doing something similar: going beyond simple historical parallels and instead casting themselves as heroes in past struggles, and recasting contemporary politics into a simplified dungeon quest with clear moral lines. When one is sick of the mundanity of normal politics, cloaking oneself in the garb of another more exciting era becomes quite appealing.

It’s fair enough for people to want to analogize current events to the handful of historical situations that everyone, in general, knows about and vaguely understands. Weimar analogies are more readily accessible to most Americans than, say, analogies to Silvio Berlusconi or Enoch Powell. Doubly so for Civil War analogies, which give an air of drama and world-historical import to more banal survey data suggesting rising partisan and regional political polarization.

But there’s also a danger that some people will actually believe this crap. America is not on the verge of a civil war. Donald Trump is not Adolf Hitler. America’s democratic institutions are facing considerable stress, but it’s not on the verge of becoming Nazi Germany, and it’s still a good way away from becoming 2018 Hungary or Venezuela, for that matter.

The Trump administration has hurt a lot of people, especially immigrants. But just because a leader is cruel doesn’t mean he’s in imminent danger of becoming a despot.

Some of the impulse here is genuine, understandable fear. Things don’t have to be truly cataclysmic to be scary and bad.

But some of the impulse is just solipsism: No one wants to believe that they’re living in a normal time of history when they could be living in the dramatic end times of the republic or the last moments before their nation is torn asunder.

Also underlying the titillated interest in civil war and civic armageddon, however, is an extreme fatigue with muddling along through clearly dysfunctional institutions. Instead of tiresome and exhausting transfers of powers, every four or eight years, between a white rural coalition devoted to shrinking the state and a multiethnic urban coalition attempting to reinflate it, what if the two sides just got onto a battlefield and fought it out, once and for all?

At best, this is a pointless and distracting form of anti-politics. At worst, constant LARPing of the Civil War and Weimar can serve to make the case that the stakes now are equivalent and deserving of equally extreme and violent remedies.

I want to tread lightly here, for fear of devolving into the kind of hysteria I’m trying to critique. But much more common than civil war or complete democratic collapse are moments when one or more segments of a democratic society decide to break the implicit social contract that forbids the use of violent remedies for intranational disputes — think the Italian Years of Lead, the French OAS, the Weather Underground.

When electoral politics begins to look exhausted as a route to resolve major political disagreements with life-or-death stakes, conducting a few bombings at home might begin to look reasonable.

But we do not live in the Book of Revelations. There will be no final judgment in which the virtuous are given power and the wicked are damned. There will just be a continuous struggle between competing factions with diverse ideologies and interests, with none ever gaining a truly permanent upper hand.

Progress is still possible. The terrain of the dispute changes, such that the once sharply contested is suddenly tacitly agreed to by all parties with any power (like universal suffrage, Social Security, and a large standing army with global bases). But the dispute remains.