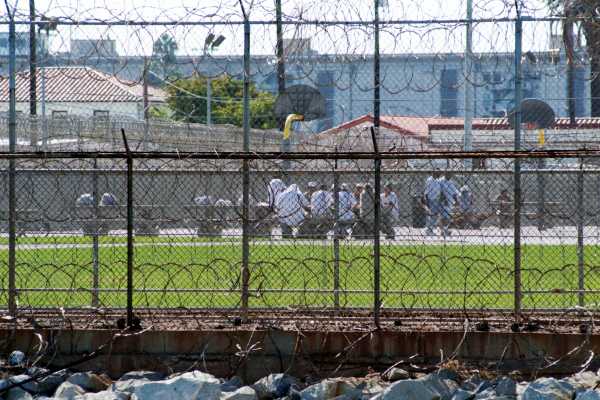 The Bureau of Prisons (BOP) announced late Wednesday that, due to Covid-19 concerns, all of those incarcerated in federal facilities will be under quarantine for the next 14 days.

The guidelines come as a growing number of incarcerated people and prison employees have begun testing positive for and displaying symptoms indicative of the novel coronavirus, and represent the BOP’s latest effort to reduce the rate of transmission in federal facilities.

But while the new guidance is certainly better than taking no action, critics of the policy argue there are better ways to curb prison-based coronavirus cases: namely, improved sanitation and commuting sentences to reduce the number of people in prison.

While all 146,000 federally incarcerated people will be confined to their cells for two weeks, the BOP said they will be allowed into communal areas on a limited — and, as much as is possible, socially distant — basis to eat, do laundry, bathe, access the internet, and use the phone. Incarcerated people will also still have normal access to educational and mental health services. New prison arrivals will be reduced during the quarantine period.

Federal prisons have already begun to see confirmed Covid-19 cases. The first was announced on March 21 — since then, an additional 28 incarcerated people have tested positive for the virus, and 30 federal prison employees have confirmed cases.

As is the case with the population at large, it isn’t clear how many cases there actually are. And this fact, coupled with the fact that conditions in prisons are generally crowded and access to the sanitation measures public health officials have advocated for is nonexistent, makes prison populations particularly vulnerable to the coronavirus.

William Brewer Jr., the father of a man serving a sentence in a facility in Virginia, told the New York Times he is particularly concerned about hand-washing at his son’s facility.

“Even as a visitor,” Brewer said, “If you want to wash your hands, you’ve got to walk out and go into another building to do it.”

A representative for the union that represents federal prison employees told Reuters his members were frustrated the BOP has denied requests for masks for prison guards.

These conditions have critics of the bureau’s new policy arguing that it does not go far enough: that being confined to cells will help limit exposure somewhat, but that it does not solve the underlying issues of guards being potential sources of community spread, nor does it address sanitation concerns.

“Keeping people in their cells for 14 days straight is NOT the same thing those of us elsewhere are going through,” Chris Geidner of the Justice Collaborative tweeted Wednesday. “Most of us have a supply of soap and hygienic bathrooms in separate rooms from where we eat, for starters.”

In response to criticism like Geidner’s, Justice Department officials have said they plan to begin releasing elderly and ill prisoners.

“There are particular concerns in this institutional setting. We want to make sure that our institutions don’t become Petri dishes and it spreads rapidly through a particular institution,” US Attorney General William Barr said Thursday. “We have the protocols that are designed to stop that and we are using all the tools we have to protect the inmates.”

In a memo to the BOP, Barr directed bureau officials to identify “at-risk inmates who are non-violent and pose minimal likelihood of recidivism and who might be safer serving their sentences in home confinement.”

Like the BOP’s new policy, however, Barr’s plan has also been sharply critiqued by criminal justice advocates, like those at the Marshall Project. They argue a large part of the federal prison population will be excluded from consideration for home release because the plan bars anyone convicted of a violent crime from participating in the program — and because the system the BOP will use to adjudicate risk (an algorithm called Pattern) is heavily biased toward white people, according to a DOJ review.

While the majority of the federal prison population — 58.6 percent — was white, as of March 2020, an even larger share, 83.3 percent, was incarcerated for crimes that make them ineligible for home release, including drug charges, sexual offenses, and other violent crimes. And advocates note that most of those convicted for these crimes are people of color, as are those convicted of immigration crimes, a group that makes up 5.9 percent of the federal prison population and one also ineligible for home release.

Essentially, they argue, just a small number of white-collar criminals — a group mostly composed of white incarcerated people — will be released. It simultaneously is revealing of larger inequalities in the justice system and means the populations of federal prisoners are unlikely to be reduced in any meaningful way by Barr’s order.

Also at issue is the fact that the DOJ and BOP do not have jurisdiction over the state prisons at which the vast majority of the United States’ 2.3 million incarcerated people are housed. Cities and states have largely been left to their own devices in determining how to adjust their prison policies in reaction to the coronavirus crisis, and have not rolled out plans at a uniform pace.

Some state and local officials have instituted policies similar to Barr’s. New York City has responded to a growing spate of Covid-19 cases in its jail system by releasing 900 incarcerated people so far — all accused of nonviolent crimes. At least 132 people imprisoned in the city’s jails and 104 jail employees have tested positive for the virus — a number New York’s incarcerated people have said they fear could grow, even with the city’s efforts to stop the spread.

These state quarantines have the same issues as the BOP’s and, similarly, early release plans aren’t guaranteed to reduce population numbers enough to ensure incarcerated people and prison staff are able to socially distance in the manner recommended by the Centers for Disease Control and Prevention (CDC).

So while they — and the new federal policies — will certainly help a number of the incarcerated limit their exposure risk, it isn’t clear they address the overarching issue of reducing the prison population in a broadly effective way. Barr has argued “many inmates will be safer in BOP facilities where the population is controlled and there is ready access to doctors and medical care,” but not all incarcerated people agree.

Steven Jones, who is serving a sentence at a federal prison in Colorado, told Reuters, “If the virus gets in here, and we are all expecting it to, we are doomed.”