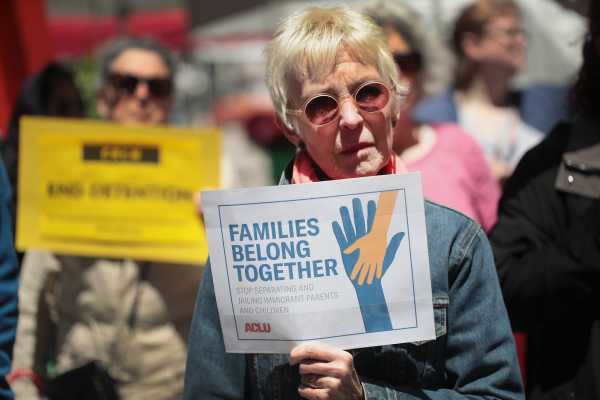 Dozens of rallies took place across the country on Thursday to protest the Trump administration’s family separation policy for asylum seekers at the US-Mexico border. Progressive groups organized “Families Belong Together” events — or, in Spanish, “Familias Unidas No Divididas“ — in dozens of cities, as well as a virtual “lunchtime” for activists who were unable to attend a rally in person.

President Donald Trump‘s administration has recently implemented a policy of separating children from their parents as they attempt to enter the United States seeking asylum. They’re splitting up families, typically, by charging parents with illegal entry into the US and sending them into criminal custody. Agents treat the children of the detained parents as if they were “unaccompanied alien children” who had tried to enter the United States alone.

The policy has sent shock waves around the country, igniting outrage on the part of immigration advocates, human rights groups, and citizens across the political spectrum. Multiple reports of uniquely aggressive or inhumane treatment have added fuel to the fire, including a Honduran man who died by suicide less than a day after being separated from his wife and 3-year-old child by Border Patrol agents, and a Honduran woman who says officials took her daughter away while she was breastfeeding her in a detention center.

The “Families Belong Together” rallies aimed to draw attention to the administration’s family separation policy and inspire more people to do something about it. (Vox’s Dara Lind has a full explainer on Thursday’s events.) They come a day after a group of eight House Democrats on Wednesday blocked off a city street in Washington, DC, to protest the policy.

Here was the scene in Boston.

There was also a rally in Fort Wayne, Indiana, where Attorney General Jeff Sessions was giving a speech.

And in San Francisco.

Sen. Dianne Feinstein (D-CA) tweeted that 40 senators now support a bill to stop kids from being taken from their parents at the border.

In recent days, celebrities have spoken out about the issue as well.